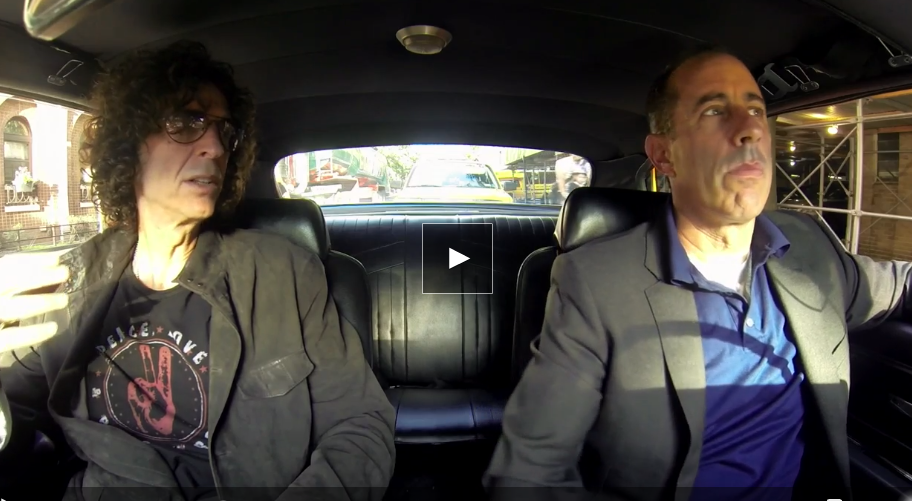 [twitter]Jerry Seinfeld‘s Comedians In Cars Getting Coffee is one of the best web video series online. The show is what it says it is. It’s Seinfeld, in a cool car, picking up a comedian, and going for coffee. That’s it.

The car is tricked out with GoPros, they have a couple of camera crews following them, and apart from the stellar production values, this really is a simple show about comedians getting coffee and talking about cars, life, and their career.

In the season finale, Jerry Seinfeld and Howard Stern go for coffee.  Stern was his usual prickly self. Uncomfortable being the interviewee, he constantly tried to twist the conversation back to be about Seinfeld.

Amongst discussions of Howard’s hair and their respective sex lives (natch), the men had a couple of rifts on fatherhood.

First, Stern explained how his father’s relationship with radio was the reason he got into the business:

“Here’s where it started for me. This radio was everything to my father. He would ignore me the entire time. He’d tell me to shush the entire time and ignore me.  And I became enamored with radio.

I could get my father’s attention, if I could get in the box, and get on that radio. And so this was my way of getting my dad’s attention.”

Jerry has a son and 2 daughters, Howard has 3 daughters. Stern interrogated Jerry about family game nights:

Stern: How long can you actually stay physically focused on the kids?
Seinfeld: I can’t play Monopoly. I cannot play Chutes and Ladders. I’d rather someone shoot me while I’m on a ladder. “Sorry” to me is the most perfectly named game. I’ve never felt so sorry.

Eventually, Stern and Seinfeld opened up even more about their relationships with their father and how their dads supported their career choices, and how they plan to do things differently:

Stern: I would’ve loved it if my father had just sat me down and said “How are you? How are you feeling?”

Seinfeld: Right, right. It seems like such a small thing.

Stern: But it’s huge. Did you have a good relationship with your father?

Seinfeld: Yeah, I mean I didn’t expect much.

Stern: Right. By the way, I love my father. A guy of his generation didn’t know how to go there and say – he’s so busy working. But as a kid, it would’ve been nice –

Seinfeld: I don’t usually say this, but you’re right – it would’ve been nice.

Stern: That’s the gift I want to give to my children. Go out. I don’t care if you’re working at Wendy’s. Be greatest at it.

Seinfeld: No, there’s no greatest at Wendy’s.