DadCAMP founder Buzz Bishop is an experienced media professional. He’s a radio host at XL 103 in Calgary, and has been on the dial for more than 25 yrs.

He has contributed a parenting column, also called DadCAMP, for the Calgary Herald and has written for print publications such as 24hrs, The Vancouver Sun, and Canadian Running Magazine.

Digitally, he has contributed to Daily Hive, The Huffington Post, Babble.com, Yahoo!Shine, Yummy Mummy Club, The Good Men Project, and Man Of The House. This is in addition to running his own blogs at The Blog According to Buzz, cyberbuzz,and DadCAMP.

Buzz has also appeared on City TV, Global Television, and YTV as a regular columnist. He is also a sought after expert for local news media when parenting or tech stories break.

You can view the complete media kit here.

Here are just some of the parenting-related articles Buzz Bishop has been interviewed for or featured in: 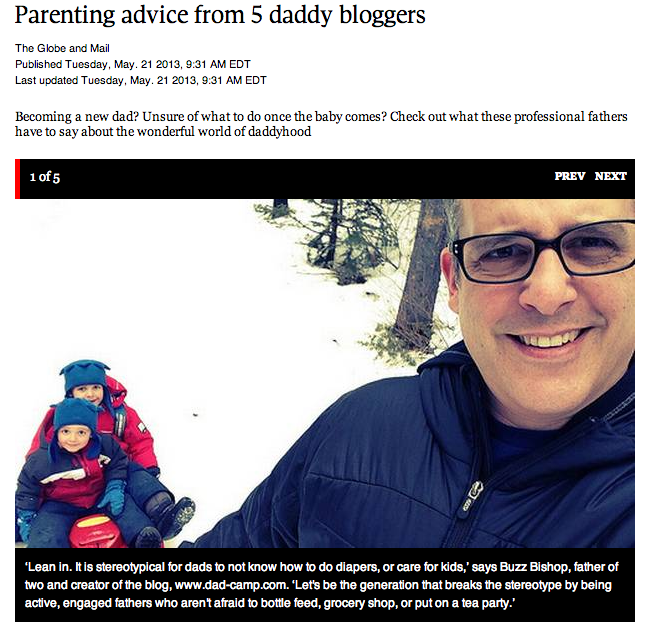 While the DadCAMP community efforts create bonds amongst Dads, the content on this Canadian daddy blog is always provocative and conversation starting. Buzz is a free-thinking writer who has no problem sharing his successes, failures, and sometimes controversial questions about parenting.

DadCAMP’s honest and straightforward style has been a starting point for discussion on parenting issues by media around the world.

DadCAMP articles have been discussed on:

The Vancouver Sun called DadCAMP’s Buzz Bishop “an information addict and pop-culture junkie — but you could also call him a media artist. He sucks up cultural information, reorganizes it into a dazzling format that makes listeners laugh and makes them feel smart.”

Cision Navigator, a Public Relations, Communications, and Marketing resource for top media contacts, has picked DadCAMP as one of the most influential Dad Blog Brands in Canada.  Cision has named @DadCAMP one of the 10 Canadian Dads worth following on Twitter.

Huffington Post named @DadCAMP one of 15 Best Parenting Tweeters (and the only Dad on the list with 14 Moms.) “He links to his always-compelling pieces about modern fatherhood, as well as intriguing content from around the web,” the site noted. “If you’re looking for think pieces and hot topics, this is your man.”

DadCAMP was picked to Babble.com‘s list of 50 Best Dad Blogs (at #16) “It’s not just Bishop’s provocative candor that keeps us coming back to DadCAMP,” Babble noted,“it’s the practical tips, too.” CanadianParents.com has chosen DadCAMP‘s founder and editor, Buzz Bishop, as one of the Top 25 Canadian Parents to follow on Twitter.

Named BrighterLife‘s Family Award winner as one of the top family writers in Canada.