When I bought my last car in June of 2011, I bought it with the idea that I was buying not only a car for myself for the next while, but I was also buying my sons’ first car. Zacharie had just turned 4 that year, but I was thinking the car I was buying would be mine for 12 and then his thereafter.

7 years in to the experiment and I’m rethinking the plan.

My seats are getting worn, repairs are piling on, and while I enjoy having a family budget without car payments, I’m looking enviously at new rides with many cameras, Apple CarPlay, sunroofs, and more bells and whistles.

So let’s just say I know the relationship with my current vehicle isn’t going to last forever, and I’m starting to flirt with the idea of breaking up.

Ford announced this year that, outside of the Mustang, they’re ditching all their cars for a lineup of only SUVs and trucks by 2020. 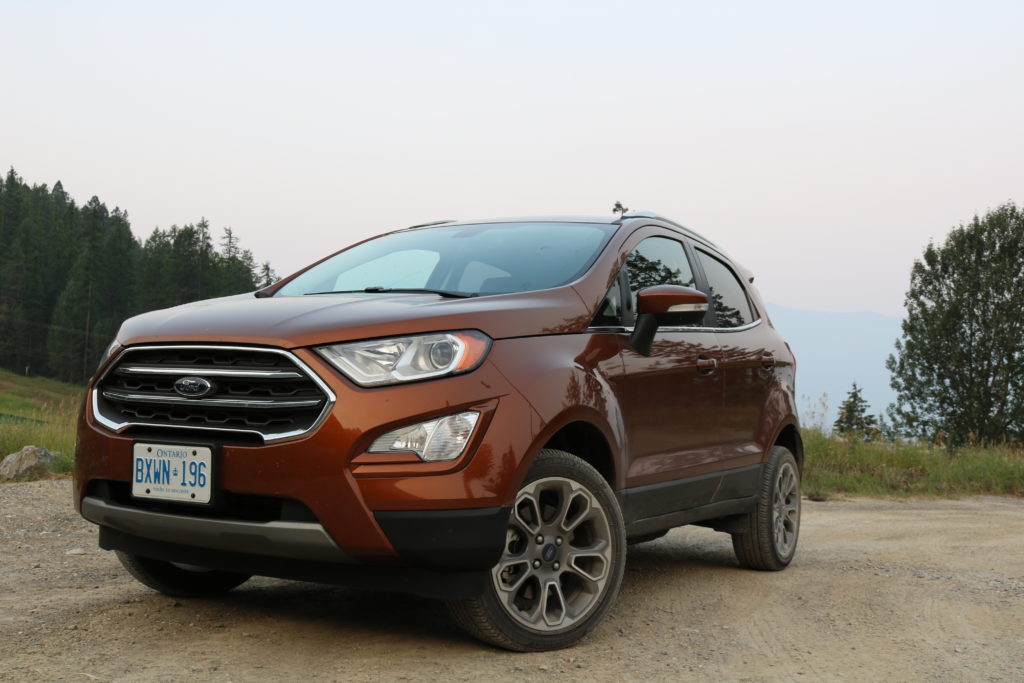 I’ve been in a four door sedan the past 7 years, and my wife has chastized me for not going with something bigger. She was way ahead of the curve in her judgement that bigger rides are where to be; the trend to bigger (and smaller) vehicles is all around us.

My parents, into their 70s and in the market for a new vehicle, are looking for a taller ride so it’s easier to get in and out. They’d like something with a little more muscle on the outside to feel safer. They don’t need a full truck or SUV, so they’re looking for something with those features, just a little smaller.

Enter vehicles like the Ford EcoSport, my review ride for a family escape across the mountains of Alberta and BC. 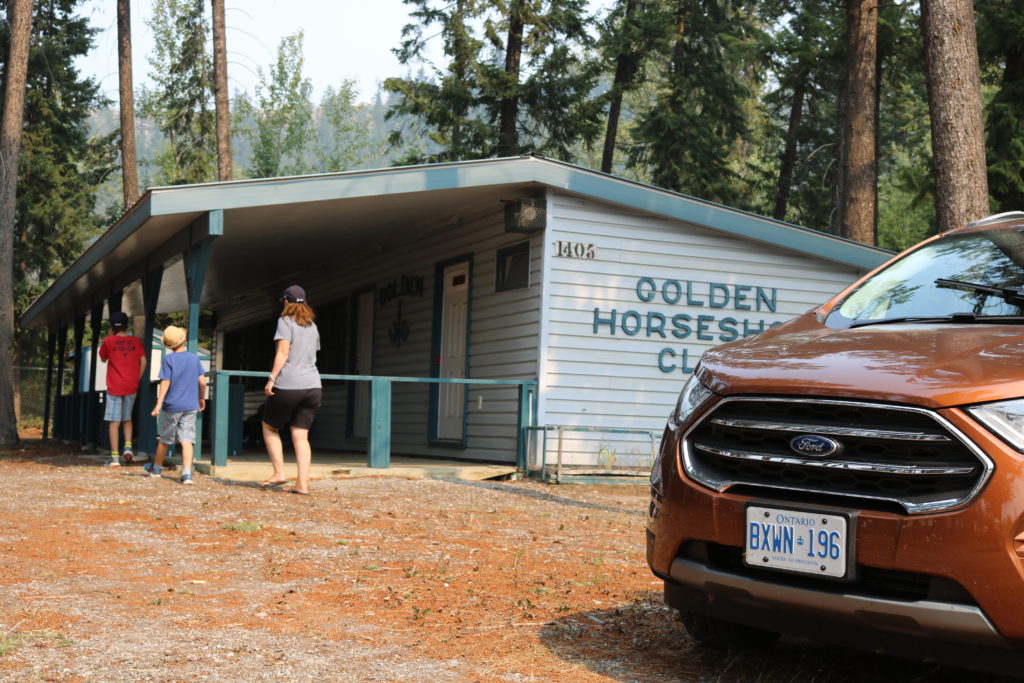 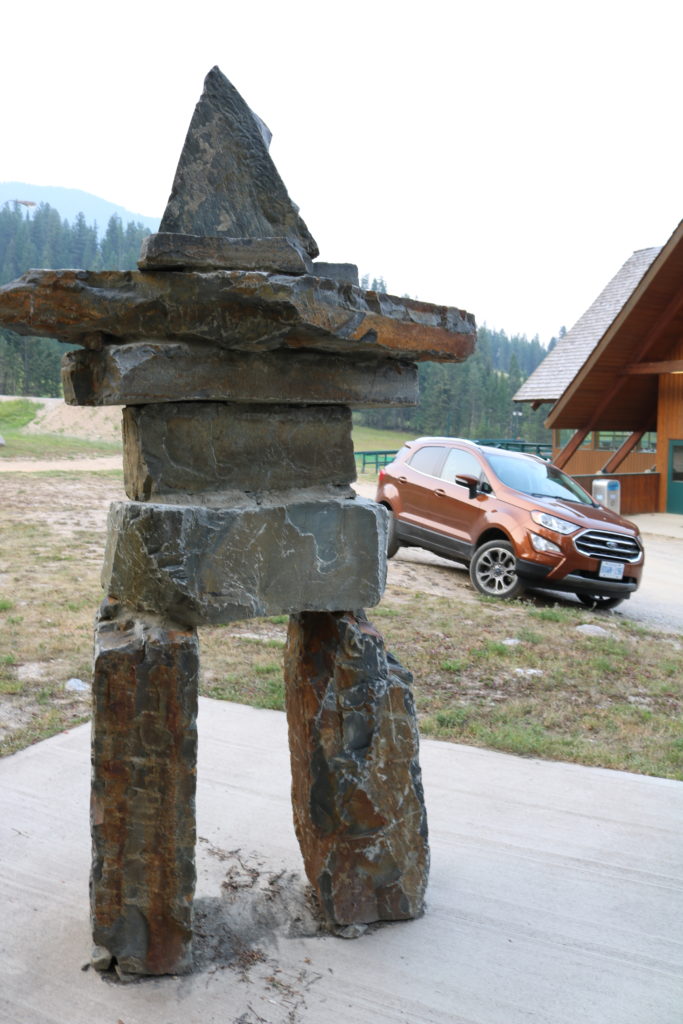 You don’t feel like it’s a smaller SUV when you’re in the front. You’re sitting up right and it has all the handling and look that you get when you’re in a bigger SUV.

The back end, while compact, still had enough room for our suitcases, swim bags, coolers, and all the things we needed for a weekend getaway at Fairmont Hot Springs Resort. 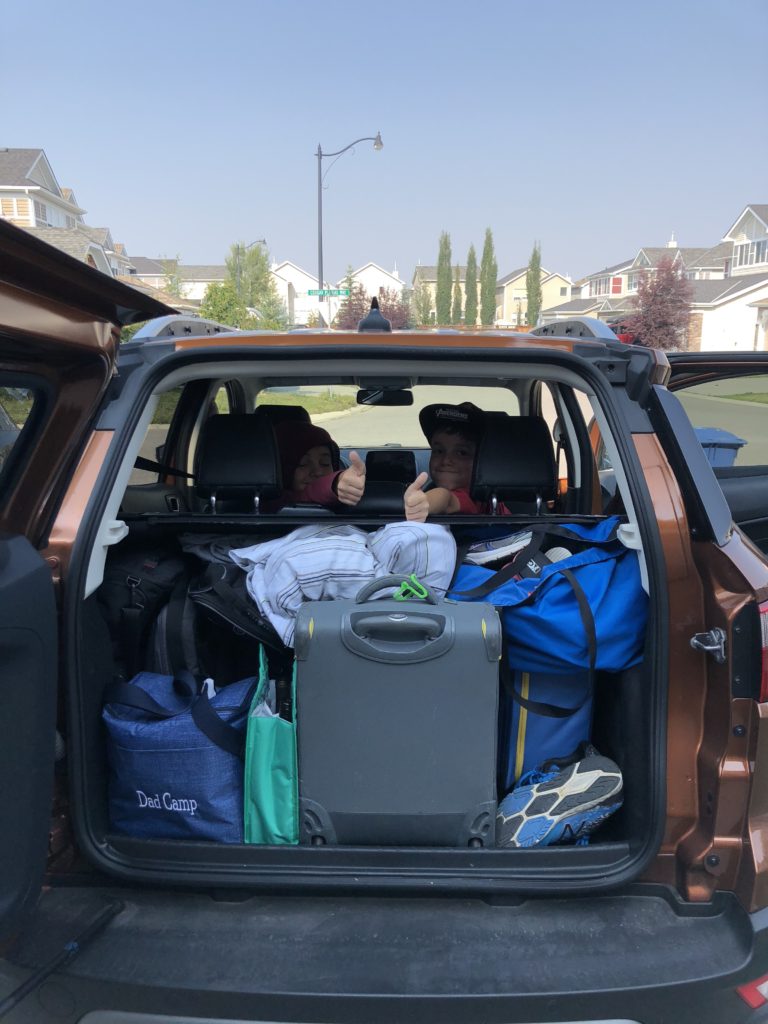 The profile of the vehicle is great. It’s got an aggressive look without the Kardashian sized back end. This makes driving it in tight places a breeze while still leaving enough cabin space inside so my kids weren’t in each other’s face.

We had to tackle a few hills on our ride through the Rockies and I found the Ford EcoSport a little lacklustre when I had to hit the throttle to climb a hill or make a pass. 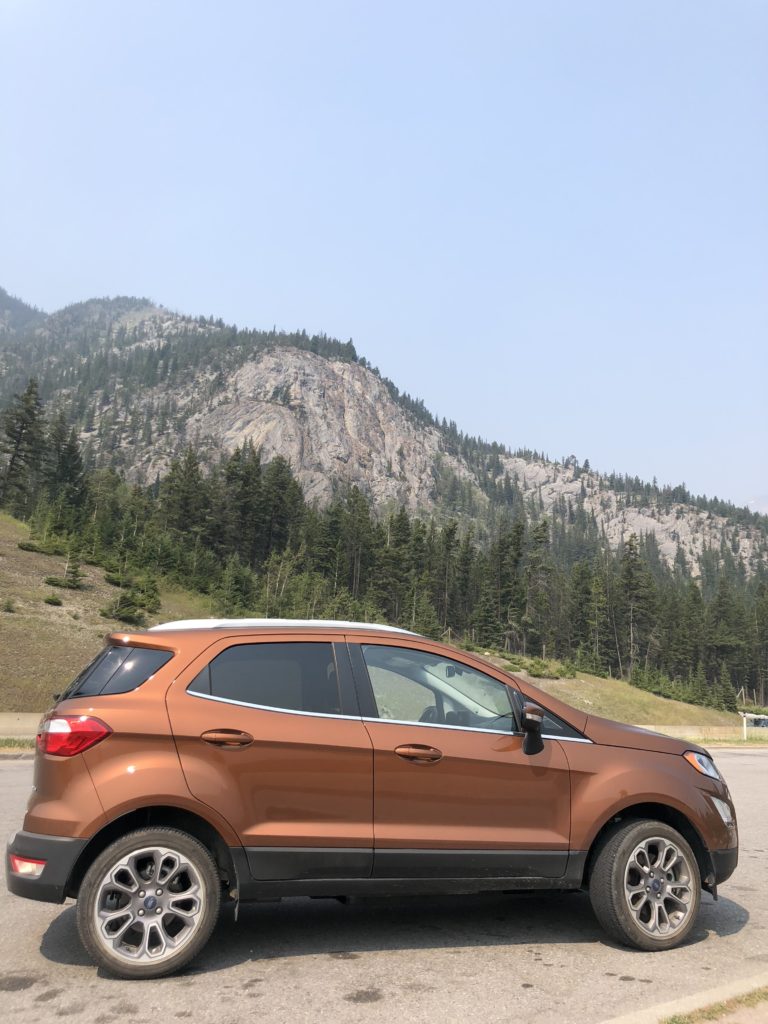 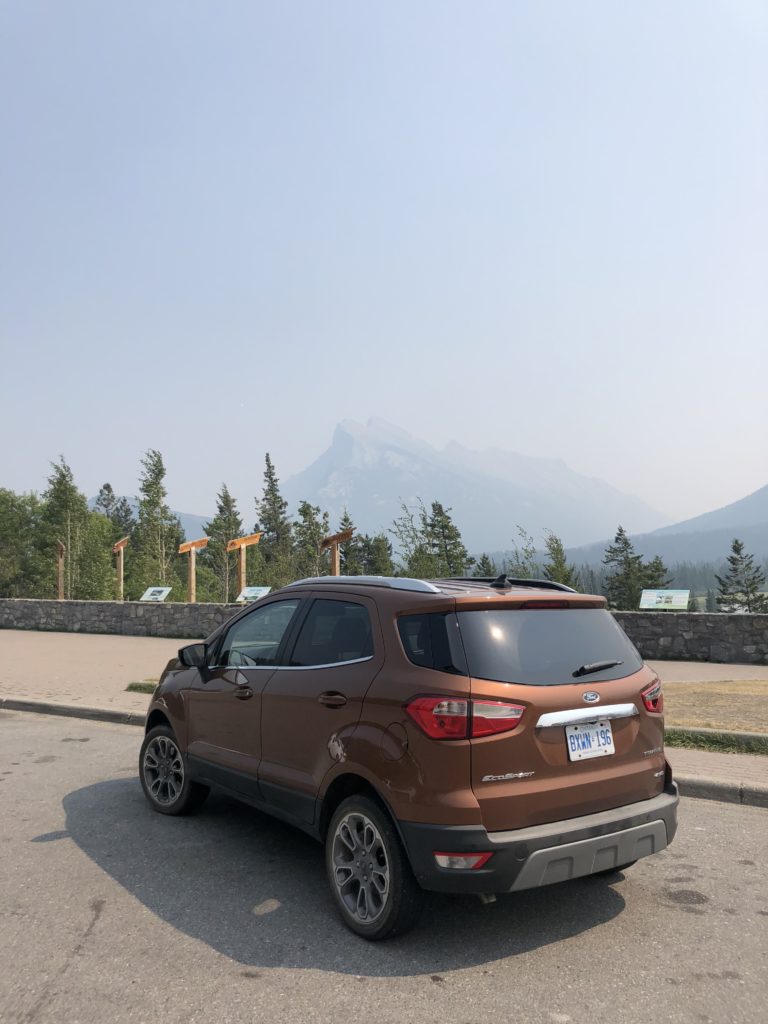 The swing door on the back seems to defeat the purpose of making a smaller SUV. The size of the Ford EcoSport makes it a breeze to park, except you then need an extra 3 feet to swing open the door to load or unload all your things.

Car manufacturers are still trying to find ways to get bigger touch screens integrated into the dashboards of modern vehicles. The Ford EcoSport puts their tablet upright in the middle of the dash, I found it a little odd looking.

I’m not sure this is the right ride for me. Our family is one person too many, and while the tight trunk space was fine for a weekend getaway, it wouldn’t hold my camping gear with both boys in the back seat, and my golf clubs barely squeezed in. 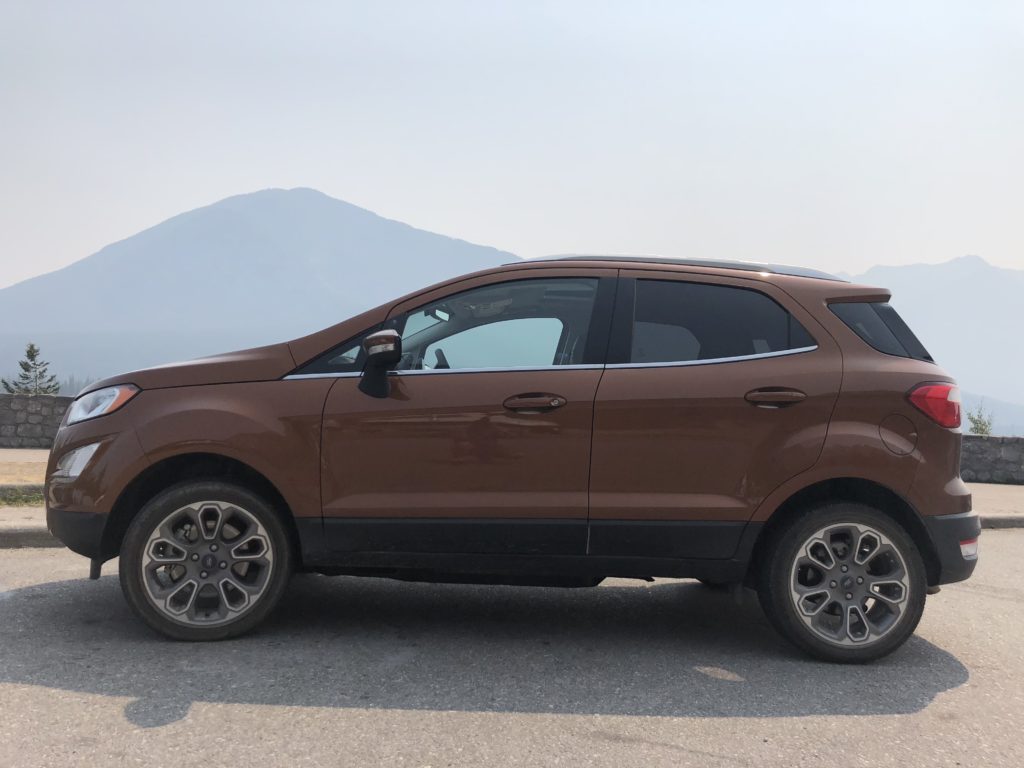 This type of vehicle, however, is the perfect thing for newly married couples who might have one child in the near future. You can flip down the seats to get extra room in the back, and even when one child rolls around you can still split the flip down to get all the gear for a family escape.

It’s easy to park, and fun to drive, but could use a little extra muscle to get around. That said, the gas mileage on the Ford EcoSport was great. Our weekend road trip through the mountains worked out at about 7.4l / 100 km which is the kind of mileage my old sedan pulls in the city. That makes it an affordable fill up that can still get you out to do some weekend warrioring.

I also think this is the perfect kind of car for baby boomers (like my parents). It’s easy to load in and out, it’s got a sturdy feel, and yet it’s small enough to truck around in the city.

I’m not a nuts and bolts guy when it comes to car reviews, for some more detail, check out the thoughts of my pal EnviroDad, Eric Novak:

Disclosure: Universal Ford and Ford Canada gave me use of the Ford EcoSport for a few days and tossed in a tank of gas.