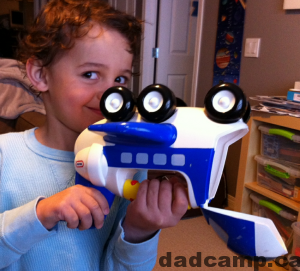 A child has reportedly been suspended from my son’s preschool. He allegedly said he was going to go to a gun store, buy some guns, and bring them to school to kill the teacher.

That was 2 weeks ago, word in the halls is the school suggested he finish the school year early and not come back.

My oldest is 5. The age where everything is a gun.

A banana. A lego brick. A blanket. An airplane.

He can turn any toy he plays with into a gun.

There has been much discussion about gun play on Kid Scoop in the past. Jen is okay with it, Devan discourages it. My wife and I try not to make it happen.

We live in a city, guns aren’t a part of our lifestyle, and while I get that young boys are searching for superheroes and the balance of good and evil, we’re trying to walk the line where guns are not a part of our family dynamic.

The suspended child is obsessed with Star Wars, and often brought gun play and confrontational themes into the free playtime at the school. It became so bad, the two female teachers brought a male educator into the classroom to help the boys in their play.

My wife and I are learning a valuable lesson about the school dynamic – you can have all the rules you want in your house, but they won’t be identical to everyone else’s rules, and there will be kids that violate them in a group setting everyday.

You can instill all the values you want in your kid, but the moment they get placed in the group dynamic, the peer influence can wipe it out in an instant.

I don’t know if it’s just a natural phase my son is going through, where the gun play has been introduced, or if it’s a case of the boys with older brothers coming up with violent games and bringing them to preschool, but everything is a gun these days.

The whole situation with the other boy really has us bothered, though. How dangerous must something be for a 5-year-old to be suspended from preschool?

There’s a reason guns aren’t a part of our family dynamic, that sort of extreme play is one of them.