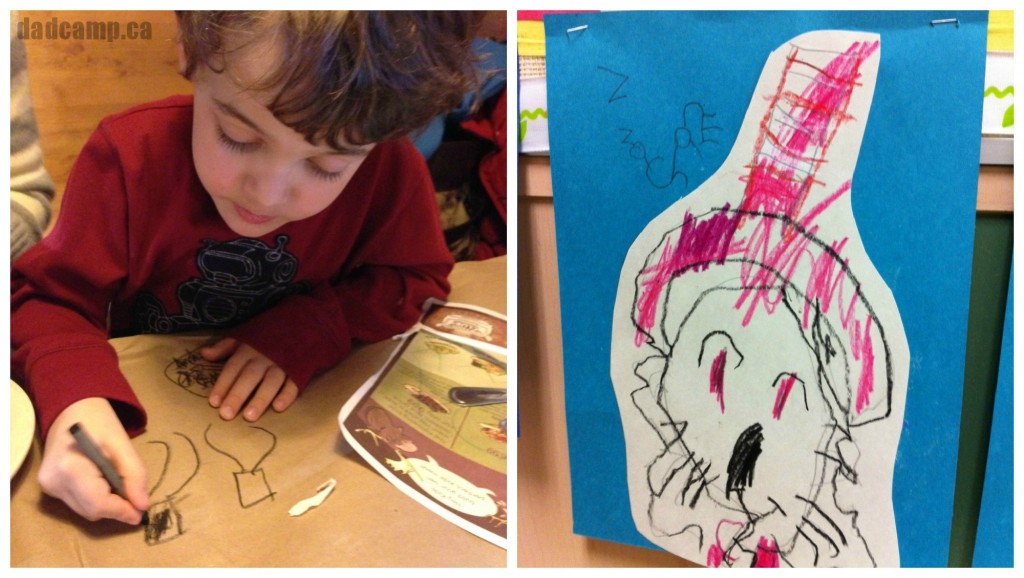 [twitter]At the beginning of the school year, our teachers were concerned about Zacharie’s penmanship. They recommended sessions with an occupational therapist to help him have a better grasp of writing instruments and to work on wrist positioning.

His pictures at the beginning of the year were in one colour, lacked much detail, and didn’t tell a very large story. The teachers have been encouraging him to broaden his pictures, and the results have been amazing.

Last week at Montana’s, Zacharie scribbled all over the paper tablecloth. Tie fighters, tauntauns, AT-AT walkers and more filled the entire table. My wife and I were amazed by the detail that was now in his imagery. A tie fighter actually looked like a tie fighter instead of a scribble.

Then I saw his picture of The Cat In The Hat hanging in the classroom. Colours, detail, expression, and a resemblance to the cartoon character that is much better than I could have ever done on my own.

I was so excited seeing the text, I filled a message back to my wife with glee and exclamation marks.

“You should see the girls’ pictures,” came her response.

I didn’t care. Many of the kindergarten girls in his class have been light years ahead of him in detail and drawing. This wasn’t comparative parenting where I was trying to keep up with the Joneses – I was looking for improvement in my son’s work. I was thrilled to see him embracing the task of creating art, putting his imagination to paper, and adding detail to his drawings.

It’s kindergarten. Zacharie will “catch up enough” eventually, the point of the exercise is to get him started on the path to expression, communication, and penmanship. He’s taking steps, he’s getting it.