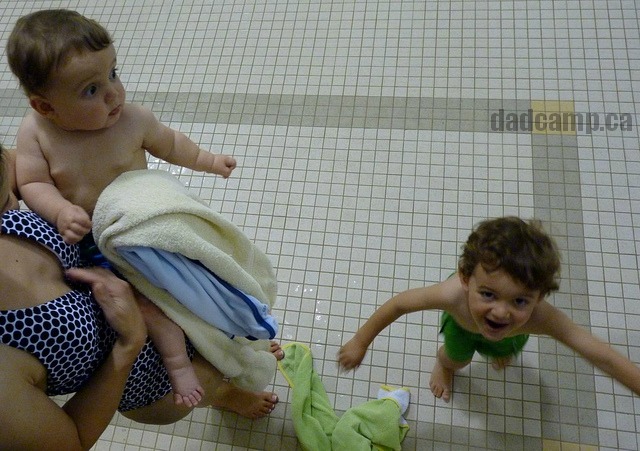 [twitter]The showers on the men’s side of change rooms at pools are big open rooms.

This fact shocked my wife. Women’s showers, apparently, are all stalled off. You don’t go into a big room, each person can have a private area to shower. Not so on the men’s side – we let it all hang out.

That means old men showering naked next to kids next to teens. Most of the time, it’s no big deal. It looks a little awkward, but it is what it is.

My son has a shower after his swimming lessons each week, and he usually acts silly and sings and dances while he’s washing his own hair. Sometimes he’ll say “Daddy, that man has a big peeps”, and we’ll have a conversation about what is appropriate to look at and talk about in a room full of naked people. He’s a kid, and these things happen.

Last night, however, I almost lost it.

Zacharie was doing his thing and getting naked in the shower when he started staring at his peeps. (Yes, we call it a peeps) Usually he goes to the bathroom after the pool, this time he went to the shower directly. He was watching the water run off his body, and giving me a knowing look. I knew what was coming – he was going to have a leak in the middle of the public shower.

He started standing askew and pointed his stream at his feet as he faced the middle of the room. His spot in the shower was open to a long hallway to the change room. Two 12ish year old boys sucking back sugary soda started giggling. I stood between them and Z and it didn’t stop.

I turned and glared and marched right down to them. “Stop staring at little boys in the shower,” I growled.

I wasn’t necessarily worried about anything inappropriate, I know these tweens thought a 5 yr old pissing in the shower was funny, but it still rubbed me that these kids were watching my son. When Z makes a shower comment it’s awkward, but he’s a little boy. Tweens know better. They were doing a play-by-play of a naked 5 yr old in the shower for chrissakes!

Zacharie and I had a chat about “being discreet” on the way home. I reminded him that the potty is just a few steps away from the shower, and he should go if he needs to. If he absolutely must pee in the shower, he needs to be like a super spy and face the wall.

How do you deal with public showers with your kids?