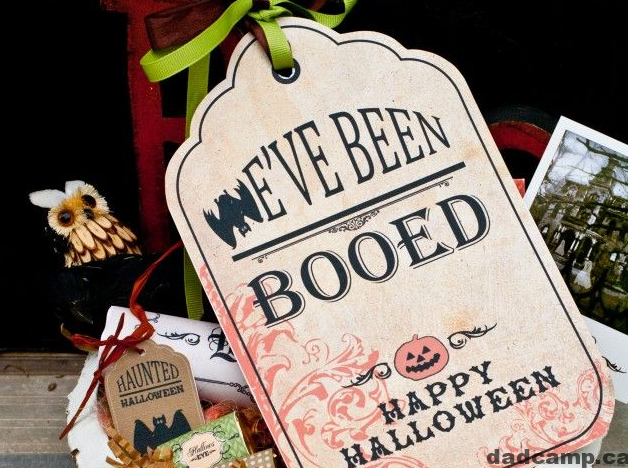 [twitter]My Facebook stream has been inundated this week with pictures of my suburban friends and their kids surrounding orange buckets of candy and toys on their doorstep. This, in case you’re new to the tradition, is called “booing.”

The rules are like a chain letter. To “boo” someone, you sneak onto their doorstep in the dark of night and leave a small bucket of tricks and treats for them to discover the next morning.

Then, once you’ve been “boo’d,” you put a sign on your window (there are dozens of printables on Pinterest) saying “We’ve been boo’d,” and do it to 2 more houses.

And it’s not just a Halloween thing for my festive friends. At Christmas they get “elfed,” and at Easter they get “egged.”

You can toss it on the pile of manufactured mythology with the Elf on the Shelf, the Switch Witch, and all the other silliness we are doing to up the ante of every holiday.

At first I thought it was just something my friends in a particularly Wisteria Lane-ish part of our city did with each other. Then my friend from California posted it and, well, it appears the movement is gathering momentum.

The booing sounds cute and all except, um, I have boo envy. We haven’t had any treats land on our doorstep yet.

My son is best friends with the people who share our backyard. The people 2 doors down have kids the same age as ours. We have weekend bbqs with a colleague 2 blocks over. We buy Girl Guide cookies from the kids across the street.

How come we haven’t been booed? Probably because the trend is too new. And we should probably be the ones to bring it to the neighborhood.

I canvassed some blogging colleagues from around the continent and most hadn’t heard of it, the few that did had only just discovered it, while others called it “ghosting.”

The best twist on this trend had one family dropping little airplane bottles of liquor on their friendly neighbor’s porch for a “boozing” as opposed to “booing.” (+1, neighbor)

It’s just another one of those things that proves Halloween builds community. It’s a festive time of year that should be celebrated and not banned (as so many are trying to do.)

So, this week, while you’re out doing your last-minute Halloween preparation, kick up the festive spirit by grabbing an extra orange bucket, cracking open the candy bag a little early and heading over to your friendly neighbor’s house to boo them with a ghosting and get on board with a new trend.