[twitter]Zacharie has been seeing an occupational therapist this year. He will see her a dozen times to help him with some fine motor skills. Zacharie didn’t pick up on printing that quickly, so he’s been having some one-on-one time with a therapist to work on those skills and to teach him some emotional restraint. 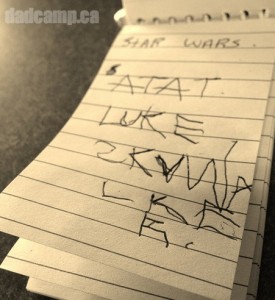 When Zacharie gets frustrated with a task he will fold his arms and declare “I quit.” Not the best attitude, so it’s been great to see him change and grow and learn over the course of the year.

Recently, we’ve noticed more changes that indicate the sessions have been a success. He loves playing with his Lego more (a great exercise to help them pinch small objects similar to how you grab a pencil) and he’s started to want to practice his writing. Recently he’s taken to a tiny little notepad. He’ll ask me how to spell words, and then he’ll scribble them down. Star Wars characters are a fave.

Then, today, I got a message from his teacher that Zacharie stood up in class and led a discussion in blueprinting for castle building. I have no idea where he got the idea, but I actually welled up inside with misty tears and tingles. I was genuinely proud. What an awesome feeling.

We are building castles. Mme: “What do you think is the first step?” Kiddo: “Well, first we need a blueprint…” Alrighty then! #kinderchat

Aside – I LOVE that my son’s teacher is active on Twitter. She will often talk anonymously about events that happen in the classroom and it has been an invaluable tool to throw out leading questions at the dinner table. So often kids will offer generic responses when you ask them about their day. To be able to say “What kind of castle are you building in school?” leads the conversation (and also helps prove the omniscience of parents).

I sent her a direct message, and she filled in the blanks for me:

We asked: what will the first step be, to build our castles? He said: “Well, first we need a blueprint!” He then explained: “A blueprint is like a picture, you draw, so you know what the castle will look like. Architects use them!” All we were going for was “First we need a plan.” Now we are architects, with blueprints. So awesome.

Again, I’m welling up as I recount the story. I have no idea where he learned about architects. I have no idea he knew what blueprints were (unless it is somehow Death Star related). I love that my guy who was struggling at the beginning of the year is now leading a problem solving exercise.

So awesome is right.