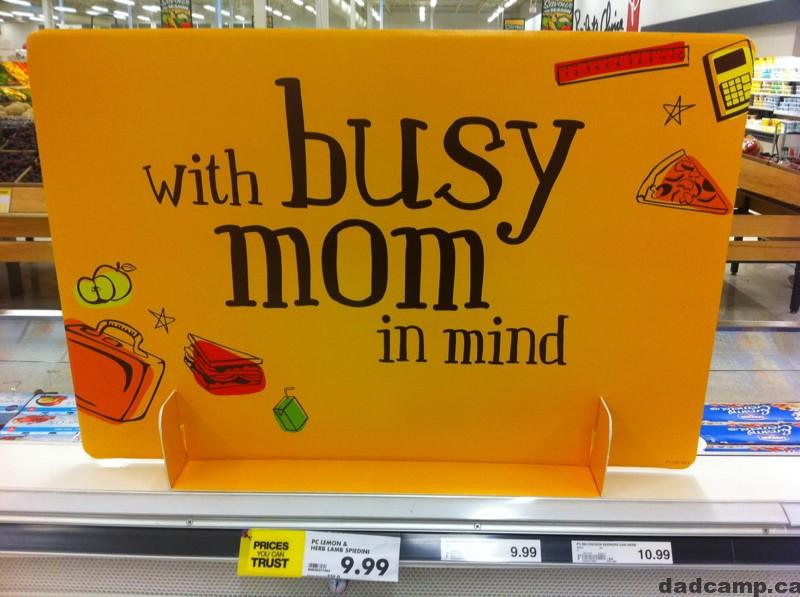 [twitter]Memo to Galen Weston: I do the grocery shopping in my house. I do the cooking too.  Dads are part of the family dynamic, and while “Mom” may be the CEO of the family, the duties get divided and I see many dads out early on Saturday and Sunday mornings pushing the kids around in a cart so Mom can sleep in.

Mom is busy, so is dad and I don’t see how your beautiful display of pork tenderloin makes it easier on either of us.

I would think Ikea is a pretty much gender neutral shopping place as well.  It has the DIY stuff to satisfy the manly fix-it stereotype and it has the clean and elegant designs to satisfy the girly pretty stereotype.  Man and woman can walk the aisles of Ikea hand in hand and have a decent hour or two stroll, dreaming about how they’d like to do their home.

I’ve never seen an eye rolling dad take a time out on an Ektorp while his wife went on and on about which Billy to buy.  Still, Ikea in Australia has found it necessary to create Mänland as a dumping ground for men.

Free hot dogs, Xbox consoles, pinball machines and nonstop sports action on TV could all be had in IKEA’s “Mänland,” as it was called during the four-day trial, while wives or other female shoppers made their way through the store unfettered. The best part of all? Women were reportedly given a buzzer so they wouldn’t forget to collect their male companions when 30 minutes of shopping was done. [source]

I’m sure many of you love the Ikea ballrooms. Smälland is a great place to dump your kids and get a solid hour of measuring, decorating discussion and color comparison on the showroom floor without whining interruptions from the kids. (Unless your wife doesn’t do “ball rooms” and is constantly reminded of the Will and Grace episode where Karen went to a public pool and said “Why doesn’t someone just pee directly on me.”)

But Mänland?  It was only a four day trial, but it still smacks of stereotype.

My fellow DadCAMP Dad, Anthony, remarked tonight: “On the one hand, it offends me. On the other hand, it sounds freakin’ awesome.”

I agree. We are men, after all.