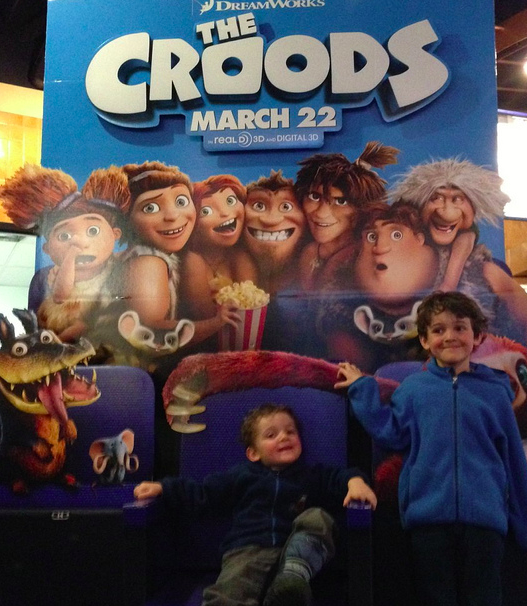 [twitter]We went and saw a preview of The Croods this weekend, and the plot will be very familiar to parents.

Grug, is the over-protective father who boldly declares to his family that “Fear is good. Never not be afraid.” when warning them about the dangers of the outside world. In the prehistoric setting of the movie, the world is a rapidly changing place, and The Croods find themselves to be the last humans on Earth. Faced with watching the extinction of his neighbors, Grug (Nicolas Cage) has found a secure cave for his family to spend days at a time. To while away the time, he’ll tell stories of the outside world that always involve someone trying something new, and dying.

Eep (Emma Stone), Grug’s oldest daughter, loves the sun and each night as it sets, she will reach her hand higher and higher to catch the rays. She longs to explore the world, and be free of her paranoid father. On a night escape, she meets Guy (Ryan Reynolds) a roaming free spirit who was told by his parents “Don’t hide – live.” And you can tell where it goes from there. Helicopter parents learn to loosen the leash, free spirit children learn to listen to their parents, and we all live happily ever after.

Helicoptering parents in movies is nothing new. To borrow a famous phrase, “it’s a tale as old as time,” but the question remains: are we learning anything?