The peer pressure to get that first cellphone plan for kids comes early.

A survey by Childwise in the UK found that most children are owning their first smartphone by the age of 7.

Now I’m guessing these are hand-me-down devices that they’re using for apps or watching shows over wifi networks and not full-blown data plans, but when parents try to keep up with each other, anything is possible! 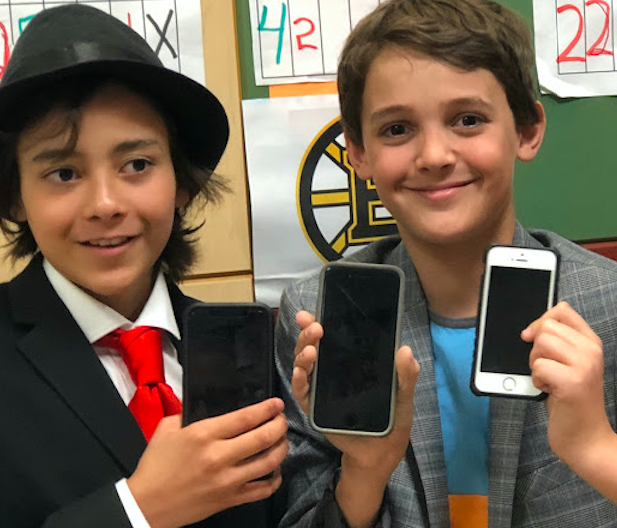 I honestly thought my sons weren’t going to get cellphones until they were old enough to work and pay for the plans themselves, but with a junk drawer in my office filled with older iPhones as my wife and I upgraded every other year or so, the hardware became more readily available.

And then when I found him a mobile plan that included talk, text, AND data for $13/mo, I decided maybe he could handle it – in the shallow end of the pool. Zacharie was 11, almost 12 when we dropped his first mobile plan on him, according to the aforementioned survey, that’s an age where 90% of kids have a phone. So I was timing it right, I just had to find something that wouldn’t break the bank and would help him learn responsible data management and phone usage.

Here’s how I found the best and cheapest first cellphone plans for my kid.

The first foray into mobile phone ownership for my tween was an old iPhone without a sim or a plan. I loaded it up a few of his apps, and signed in with his Apple ID, so we instantly had a device that worked on the school’s wifi that we could use to send iMessages about pick up and drop off during school hours and play some games with his friends.

This more limited approach to a personal device also tested his responsibility for keeping care of it, making sure he could handle it properly at school, and all sorts of training wheel steps.

Then summer vacation started to creep up.

The carpool lane at summer camp is a little crazier. It’s not always convenient to park, walk a block, pick them up, and walk back. I wished for a way I could buzz the boys and tell them to just pop outside the door. So we started to look at small plans that would afford the talk and text and allow him to use data at camp or at school through WiFi. 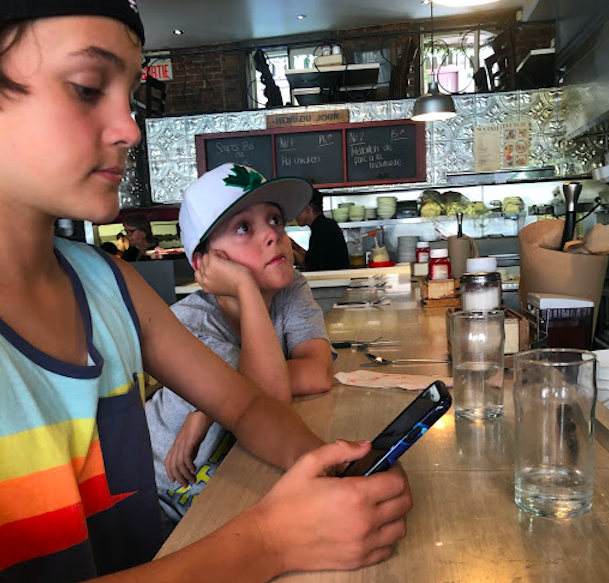 With a collection of Pay-As-You-Go and pre-paid options on the market, getting your kid their first mobile plan isn’t as much of an expensive proposition as it used to be.

So with a fancy hand-me-down iPhone 6 in his pocket, we decided to take the plunge and grab him a plan. After surveying parenting friends around the web, I narrowed it down to two choices.

The first plan we purchased for our son was a Speak Out prepaid option. You can buy the SIM card at a 7-11, set up an account and then the minutes and data just tick down as they’re used. You have 1 year to use your balance, and when you run out, you just top up.

So we loaded his phone with $20 worth of airtime, billed at 30 cents a minute. This allowed us to call for pick ups, he could let us know what was happening, and he had access to wifi at school.

After he had demonstrated responsibility with his phone, and it became time to give him a little more leash, I started looking around for plans that offered a bit of data, all the texting and calls that he could need, without a lot of cost.

For these type of plans, you’re going to be looking at the off-brands of the big carriers. So check out Virgin or Koodoo or Lucky or Fido or Chatr to see what works for your needs, but I found the absolute best deal to be with Public Mobile.

I bought a $20 SIM card from the mall kiosk and then signed up online for the cheapest plan which was $15/mo for unlimited incoming calls, 100 minutes outgoing calls, unlimited texts, and 250MB of data at 3G speed. Perfect! 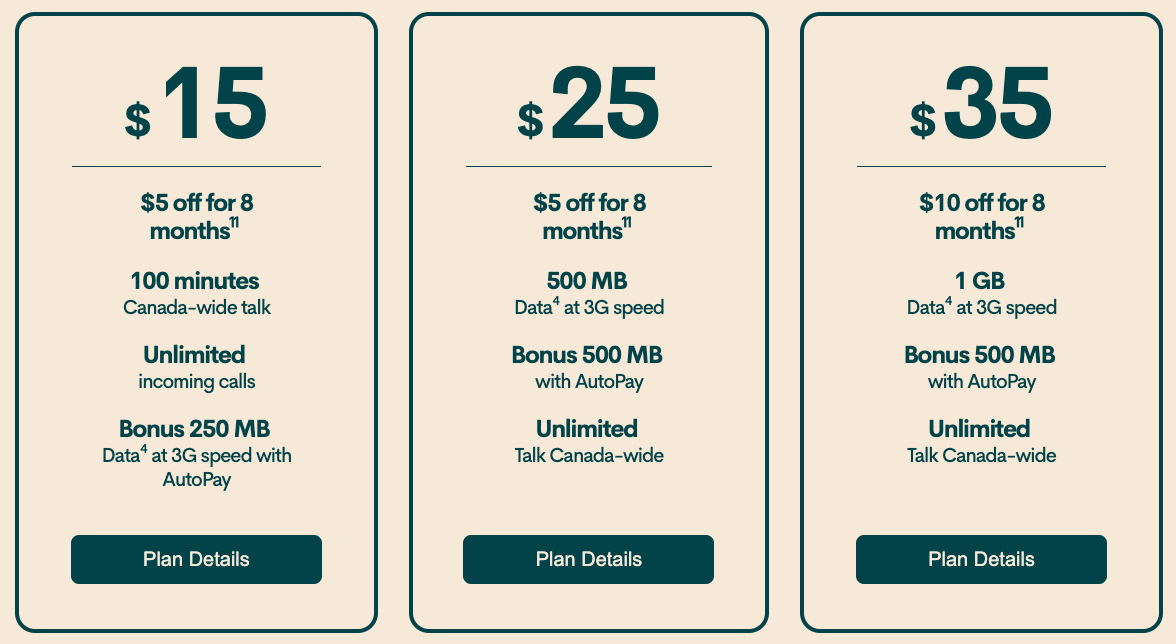 The data might be a little stingy for some, and the 3G speeds might be an annoyance, but he’s working off an iPhone 6 and this is his first phone plan. I’m not a parent who gives him the biggest and greatest whenever it comes out, they’ve got to earn it. I’m glad to give my boys hand-me-down phones when my wife and I upgrade, and if he’s not happy with it, he can buy his own – not me 😉

When I linked it to renew each month on my credit card, they knocked another $2/mo off. My son’s mobile plan is only costing me $13 a month!! It’s an amazing deal, and he’s being super responsible with it – which I’m most proud of. If you think it’s a good deal for you, use my referral code 4Q9P9R or this link and we’ll each save a buck a month on top of it all.

WHEN SHOULD KIDS GET THEIR FIRST PHONE?

I’m glad we jumped in sooner than I thought.  I was thinking phones were a high school thing, but they start appearing somewhere in Grade 5 and then by Grade 7 “everyone has a phone.” Teachers are telling kids to take pictures of notes and overheads to use as reminders. There’s a roster of apps to help them track due dates, time management, and their grades.

We timed the phone debut at just the right moment, I think. Easing my son through the dummy phone, and then the summer camp experience, and then a full plan on his own has been a great way to install training wheels on his mobile usage and be able to teach him responsible management.

This summer, as my youngest leaves Grade 5, he’ll get that dummy device to use through the summer and the training will begin again. 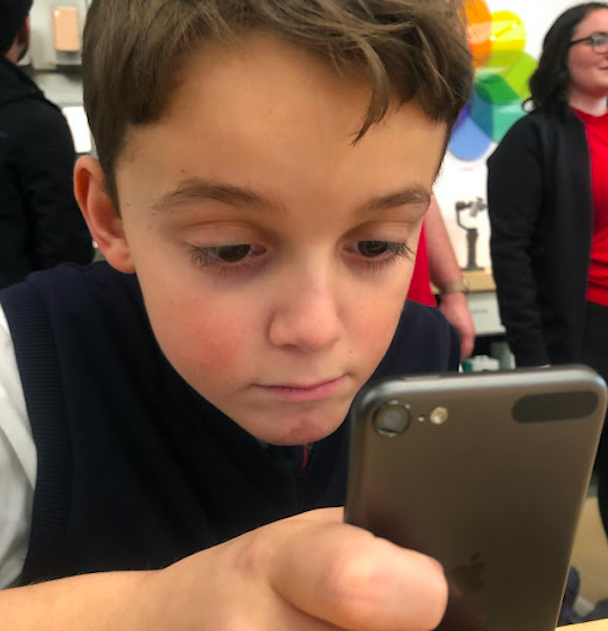 Note: getting them the plan is just the first part of the equation. Make sure you link the phones together through iTunes to manage screen time, content, and app permissions. You can’t let them go 0 to 60 all in one shot!

This post is not sponsored, but does contain affiliate links as mentioned.