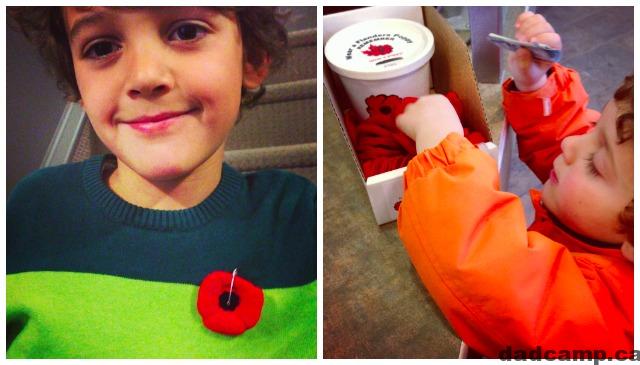 [twitter]We don’t have the tv news on as much as we used to in our home. Not much happens in that show that a 6 and 3 year old need to know.

Still, there are reminders of the bad that happens in the world that they understand. November 11, Remembrance Day in Canada, with its poppies and ceremonies is something the boys are starting to ask about.

They have assemblies at school, and they know that we wear a poppy. They know that soldiers go to war with tanks and guns and planes and boats and people die. They don’t know much more than that.

We do Remembrance Day in Canada because we are embarrassed that it had to come to that. We mourn the loss of the soldiers, but are thankful for the greater good their sacrifice afforded. Lest we forget is about remembering the horrors of war and never letting it happen again.

The US narrative is more akin to “Team America F– Yeah!”

A recent post at Babble.com got my ire up about the whole talking to your kids about war thing as a mom wrote about how her toddler snuggles with toy guns in bed and is learning about being a good soldier. Yes, her husband is in the military, so it’s part of their family story, but the comments on the article are what really made me upset.

“I am thankful to you for raising your boy to be a man,” wrote Dawn Holmes.

Does this mean I am not a man if I a) don’t like guns b) don’t have them in my home c) discourage my kids from pointing and shooting at friends?

I sure as hell hope not. No guns, thanks. No war. No soldiers. Respect to those who did it, but the world would be a better place with less of it.

An article in the Globe and Mail articulated my feelings on the subject of hero worship and war perfectly.

For those of us who marked Remembrance Day as schoolchildren in the last century, this was a simple matter: “Never again.” We were standing for fellow Canadians who had suffered the horrors of war. Soldiers were victims.

Our schools would invite veterans of the two world wars and Korea, many of whom had been drafted as teenagers, and as we sat cross-legged, they would tell us of mustard gas, flame throwers, dead children, firebombing campaigns, dysentery, terror, loss and shame. And also about the grave and unfortunate necessity of their deeds. The feeling was near-unanimous: We had scarred a generation with the gashes of war, and we should avoid doing so again. War was tragedy.
[Globe and Mail] 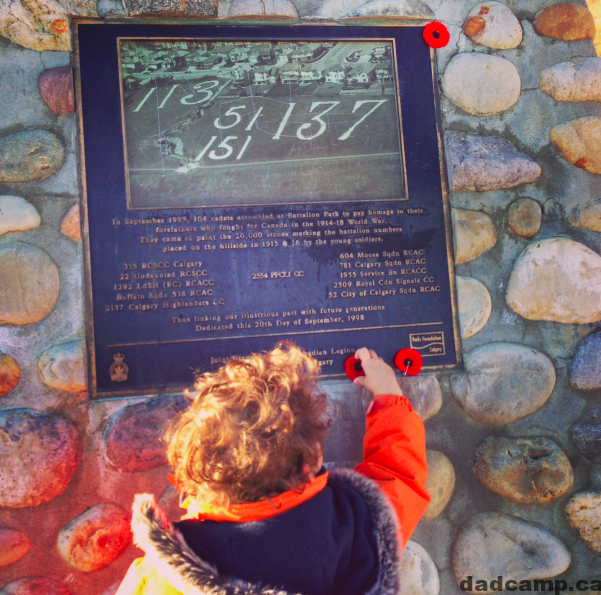 War is nothing to be proud of, frankly.

So, this Remembrance Day, I took the boys to Battalion Park for the 3rd consecutive year. It was a huge training camp for the soldiers during wartime and features their regiment numbers permanently on the hillside. We take the steps down to the memorial monument, stopping to look at the historical pictures along the way. Then, when we got to the bottom, I showed them the picture of my grandfather in his Navy uniform. I talked about how he was on the HMCS Oakville and ran up and down the coast watching for bad guys. I told the story of my great grandfather as a part of the forces in WWI that liberated Jerusalem and showed them a picture of him on a camel in Cairo at the foot of the Sphynx.

I tell them that Remembrance Day is to stop and think about the bad things that happen during war so we remember to never let it happen again. That’s why we wear the poppies.

As I was flipping through my phone trying to find a NFB video about my grandfather’s boat, the boys noticed the flags at the monument and broke into O Canada.

Then they put their poppies on the monument and asked that I start a video to send to their great grandfather.

At 3 and 6, my boys understand what it means to be a man, frankly. To show humble respect to those who have gone before us and to vow never to make the same mistakes.