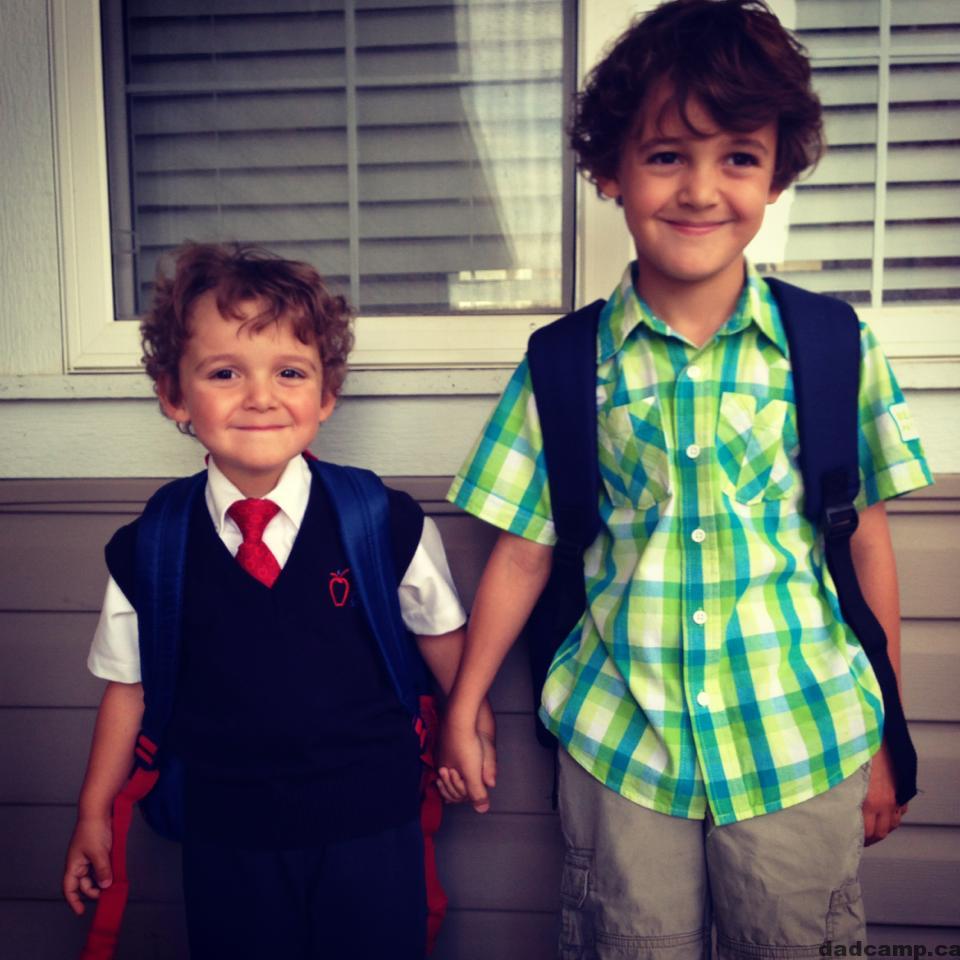 [twitter]I’ve been thinking a lot about private vs public the past month. I’ll have a full essay on my thoughts coming soon, but even on the first day of school the differences are already popping up.

This year Charlie will be in private school so he can be in French Immersion for 5 half days a week of what we call Junior Kindergarten. Zacharie has moved on to the public system because we can’t afford to keep them both in private through their elementary careers. We are now a two school family

Charlie’s school has sent us emails for the past month getting us prepared for the first day of school. Zacharie’s school had the teachers phone parents to give them class information, something that happened for us while we were away on vacation.

The personal touch is great, having digital access to information wherever / whenever is much better.

Charlie’s school has a uniform, Zacharie’s doesn’t. We still dressed Z smartly, but I so love how the kids look when they’re all ready to go for a day of learning, even at 3 and 4 years old.

Zacharie was very positive for most of the lead up to school, but then got a little shy as we approached the building. It’s his first day at a new school. He was a little nervous as kids who knew each other from the previous year goofed off with each other. He’s like me, shy at first, but will open up greatly to those he likes. Here’s hoping he finds a ‘les amis’ right away.

We still don’t know the routine for Z’s school. We dropped him off in a basketball court today, I will pick him up at a classroom in the afternoon. We don’t know how it works with the buses. There was no information packet handed out. They kind of take for granted that kids went to the school in Kindergarten. I’ll have to do some digging to understand the school routine.

It would be nice if the school even knew the routine. Despite telling his teacher this morning that he would be picked up by me, we get a panicked phone call this afternoon wondering about Z and buses. Things would be so much easier if the school wouldn’t wait until the Friday before a long weekend before contacting parents. We filled out the forms in May.

Charlie’s school has an information night tonight, on the first day of school. You can meet the teacher, see the classroom, and get a handle on the kids’ routine. Z’s school?

So far it’s the private school ahead of the public, but it’s also the system we’ve known for the past 3 years so there is a comfort bias.

The saddest part about this entire experience is that my kids can’t walk to school. A 5km drive to Zacharie’s school takes nearly 20 minutes, while Charlie can walk the 3 blocks to his school. The school building situation in Calgary’s new communities is, simply, an embarrassment. If we did not buck up for the bit of private schooling we can afford, there would be no walking to school at all.