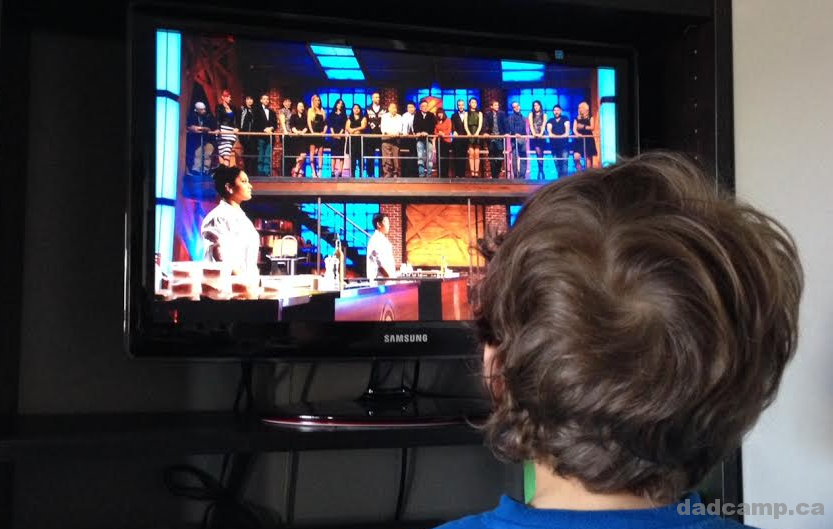 The cartoons are starting to wane.

In their place are silly kid comedies like Sam + Cat and Haunted Hathaways. Oh, and Amazing Race, Survivor, and Master Chef Canada.

We started catching the east coast feed of our favourite reality shows while the boys were still up and .. they liked them. So now we place family bets before the challenges on Survivor cheering for the “purple team” or the “orange team” and cheering for The Cowboys in the Amazing Race.

Then, one night, flipping away from another horrible news story at 6p that wasn’t kid friendly, I landed on Master Chef Canada. And Zacharie loved it. And now, for the past 7 weeks or so, we’ve been watching the show on Monday nights at 6.

The finale was tonight and Zacharie actually clapped his hand with glee when I reminded him that tonight was the finale. He sat on the edge of his seat watching Marida and Eric whirl about the kitchen making their final 3 course presentations.

“There were 16 people eliminated and the winner gets 200 million dollars!” – @zacharie on @MasterChefCDA

“Daddy if you were inside Master Chef Canada for the final one, you would have to do a lot of good stuff.” – @zacharie on @MasterChefCDA — Buzz Bishop (@buzzbishop) April 29, 2014

Halfway through the show, Zacharie switched horses. All along he had been cheering for Eric, but after watching the judges scold him on his lobster method, Zacharie changed his pick to Marida. “I think Eric’s going to have the lobster overcooked,” he confidently declared.

Except Eric‘s lobster wasn’t overcooked. “I think I’m going for Eric now,” Z admitted. Then Marida had her dish judged. “That’s two checks for Marida. See, I was going for her,” he giggled.

What can I say, the kid likes to win. Or so he thought. Eric won the title in the end and as we all cheered, Zacharie chimed in.

“I thought Marida was going to win because she was doing everything very carefully,” he said. “But then I actually tricked you guys, I was going for Eric the whole way.”

Despite hours of watching home cooks whip up masterful dishes, and Zacharie loving it all something was missing. “Would you eat that Zacharie?” we asked as the final plates were presented. “No. Because I don’t like trying new stuff.”