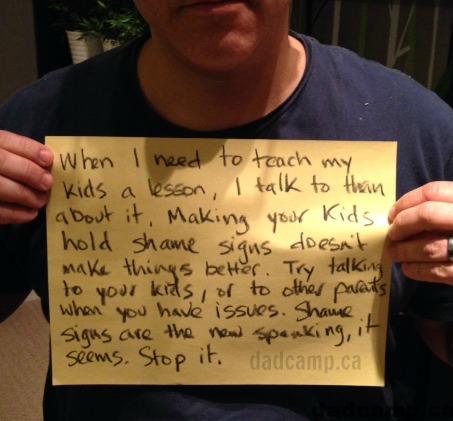 When you spank your kids, it says a lot about your ability to parent. You can’t control your rage, and it explodes in a violent outburst. I know, I’ve been there.The phrase it’s going to hurt me more than it’s going to hurt you is absolutely true, because the ocean of guilt that floods a spanking parent is instant.

You see them everywhere.

I thought Tommy Jordan was great when he took a gun to his delinquent daughter’s laptop. I shared it and called him father of the year.

But now it’s going too far. There are too many shame signs. There is too much public shaming that does more to feed a parent’s ego than teach the kids a lesson.

Yet another shame sign popped up in my feed this week. Skepticism is setting in on the validity of this one, but regardless, they’re terrible.

It is true that when parents threaten our kids, we should follow through on the threats. So when I see parents selling their daughters’ One Direction tickets on eBay because they were sneaking around to a boy’s house, I applaud their efforts. Then, when I read the eBay listing and see the parents going over the top to publicly teach their kids a lesson, I wonder if they’ve overdone it. Selling them does what you need it to do, telling the world feeds your ego and hurts your kids.

You know that spanking saying, “this is going to hurt me more than it will hurt you?” Well, I think this sort of public shaming does just that and more. It hurts everyone by taking the family and placing them in a viral spotlight and destroying the kid’s esteem.

Parents may think they’re being clever by making their kids hold a sign announcing their indiscretions as punishment, but it is so much more than that. When a grounding that used to happen at home and be known among a select group of friends becomes a public shaming for the world to see, the punishment rarely fits the crime.

If your kid is being a bully, don’t bully them back. If you make a threat and you need to follow through on it, take the high road. Be the example for your kids and model the behavior you want for them.

Yes, there are consequences to actions, but public shaming is a step too far.