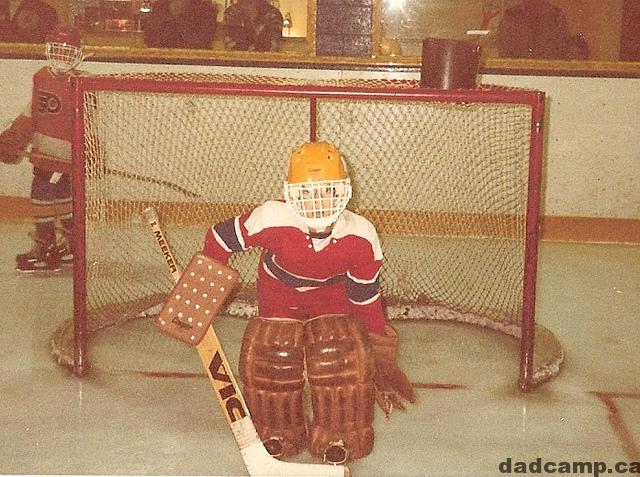 For about 10 years I played hockey. Between the ages of 6 and 16 I was good enough to make some Rep B teams that took me to games across the Lower Mainland and even to tournaments in Calgary.

When I think back to the 6am practices at the Richmond Arena, I remember my Dad getting me up early to take me to the rink before driving me to school and then heading to work himself. I still remember the night after a tournament in North Vancouver where it was my mother watching in the stands when I won an MVP award and took me to dinner after the game.

BOTH of my parents were very active in my minor hockey career. They both tied skates, they both shuttled me to games and practices, they both volunteered time to fundraise.

But if you watch the commercials coming from Proctor and Gamble in Olympic years, you’ll think that it is just moms who get up early, and support their kids.

Their latest campaign, #ThankYouMom,  is being hailed as another monumental goose bumping tear jerker. It’s going viral, for good reason – it’s a great spot. But .. where are the dads?

I guess you could call the Dad Bloggers Group I belong to a special interest group. We are a few hundred engaged, active fathers who are trying to further the cause of fatherhood and the portrayal of fatherhood in the media.

Media helps shape conventional wisdom. The representations of people, cultures, gender, occupations, races in e mainstream media shape what we believe to be true. Gangsters are italian, mechanics are greasy, dads are doofuses. These are the representations out of central casting that are perpetuated by movies, television and, more importantly, advertising.

This latest campaign could very easily have included fathers, minorities, families. The latest ad from Canadian Tire perfectly reflects that it takes an entire community to raise an Olympian:

Here are some articles you can read to get a better understanding of where dads are coming from and the message we’re trying to change:

Listen, despite my 1400+ words here I actually don’t think this is a huge insult. They’re not saying dads are stupid or useless, they’re, well, just pretending dads don’t exist for the purpose of this campaign, except where it suits them (i.e. selling shaving cream). Exclusion doesn’t always mean it’s actually offensive, unless you really dig to find that offense.

What it is is a big disappointment. P&G failed to live up to the bar for which they claimed to be reaching, and missed a golden opportunity to do a solid for all parents who struggle and fight to help their kids reach their dreams.

“While most Olympic sponsors celebrate the win, P&G is focused on the journey through the eyes of the person who taught each of the athletes the daily lessons of character, determination, and commitment that add up to define a champion,” the company says — which simultaneously makes this mother proud, and also makes her wonder why P&G has left dads out of their equation. But Jodi Allen, P&G’s VP of North American marketing and brand operations, assured me in an interview that “it goes without saying that dads play an important role, too,” and that the company “honors dads through programs from our brands like Gillette.” However, she added, P&G has “found that both the athletes themselves and their dads really welcome the chance to honor the role moms play in helping their kids achieve their dreams.”

Later this month we will meet at the Dad 2.0 Summit to engage with brands like Microsoft, Kraft, and Dove. We’ll be there to show that our blogs have influence and that dads are a vital voice in the family that should be treated with as much respect as moms. We’ll be there to show that dads are married, single, gay, straight, black, and white, and we are bound together by a single bond – we love our kids.

The dads in my group admit “we have work to do,” when it comes to changing public perception about what it means to be a dad. When we are excluded from big touchy feely campaigns that define brands, it shows that dads are not yet accepted as emotional centers of the family. It says we don’t equally contribute in purchasing decisions, and we’re not worthy of being pursued.

I may not have made it to the NHL or the Olympics, but I had a great minor hockey career that still brings back many great memories because of my mom AND dad.

#ThankYouParents See? That wasn’t so hard.