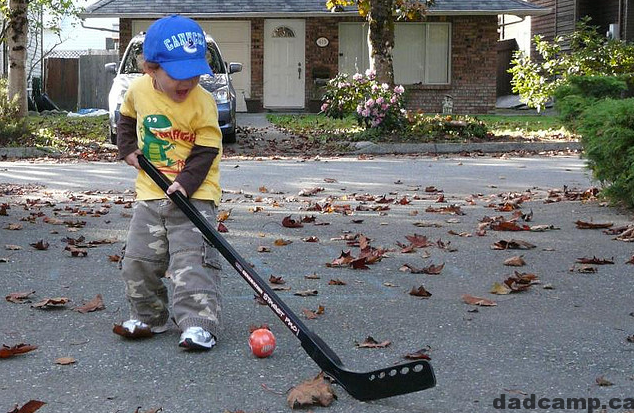 [twitter]Sport has always been a focus for our family. Almost to the point of causing me stress. While most families feel overscheduled, I feel like I’m underscheduling them.

I feel like I’m letting Zacharie and Charlie down when I don’t have them in enough activities, exposing them to a wide variety of activities to help find their passion.

We can’t afford everything, but so far the boys have done swimming, rock climbing, gymnastics, karate, skating and soccer.

Zacharie talks about wanting a skateboard and learning how to ski. He sees ‘the big kids’at the skate park near our rec centre, and he wants to drop into the half pipe. Last year at school he took a series of lessons at the ski hill down the street, and he’s got the bug.

I wish we had the budget to do them all.

It’s hard making these choices. Zacharie has had three years of skating lessons, and while I’m nervous about what being a ‘hockey parent’ means in this modern era, I feel guilty that he has yet to put stick to puck on the ice. He just doesn’t like it. And, really, that’s what it’s all about. As much as we want to push our kids to find an interest, we have to follow their lead.

Many young Canadian kids dream of becoming the next Sid the Kid, Brett Lawrie, or Christine Sinclair, but for some families, amateur sports programs simply not affordable.

The RBC Believe in Kids Pledge was announced earlier this month and promises $100M over the next five years to programs for kids. It will support them scholastically, physically and emotionally by supporting a variety of programs. The opening day announcement saw $7.4M donated to 231 after school and children’s mental health programs across Canada.

Check out this video of Thomas dreaming of being Johnny Bower. You’d think a young kid from England would want to Bend it like Beckham, but no.  He’s all-Canadian now, the game is in his veins.

That’s some good work right there.

“Ensuring our children and youth receive support throughout critical stages in their development is a priority for society and an important area of focus for us at RBC,” said Gord Nixon, RBC President and CEO. “We believe a well-rounded child is happy and healthy in mind, body and spirit, so our Pledge supports a wide range of arts, sports, wellness and education programs that help the ‘whole’ child, instead of adopting a single issue, cause or charity.”

To kick off the , RBC has already announced $7.4 million in donations to support 231 after school and children’s mental health programs across Canada.

Living in an Olympic city like Calgary you can see how important sport is to a community. I live just a few blocks from Canada Olympic Park and my son has told me he wants to be a ski jumper one day. He’s 6, so maybe in a few years he’ll be flying from that jump, or skating at the ice at the bottom of that hill that is home to Hockey Canada.