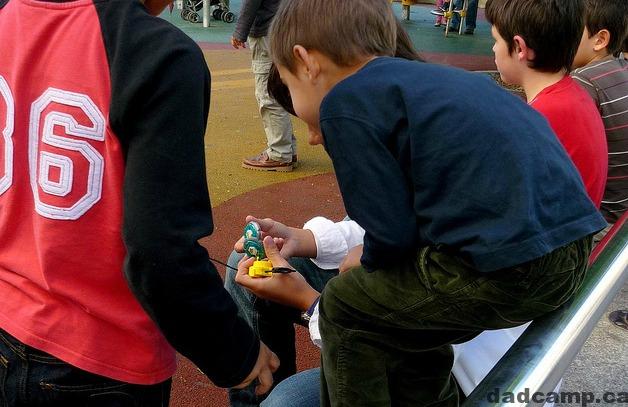 [twitter]You are the boss until you’re not the boss. For the first few years of your child’s life, you control the conversation. Then, when they get out into the world, there are more influences in their perspective and your total control begins to wane.

Grade 1 has arrived upon our family this year and with it the request for “blay-blades.”

Before this year it was Lego and Superhero stuff. Now, after seeing tournaments and gaming on the playground at recess and lunch, Zacharie has informed us he would like the “Switch Witch” to bring some “blay-blades” when she swaps out his candy.

I knew what Beyblades were, sort of, but didn’t ever think they would be a part of our family dynamic. Now, because of the peers, they likely will land in November.

I asked Z’s teacher about them. She confessed they have been hugely popular as the school has allowed toys to be brought from home again. In the past it was Pokemon cards, but those were pulled from the playground when it was found the Grade 5s were taking advantage of the Grade 1s when it came to making trades. Savvy kids.

This year it is “blay-blades” and a wooden stick and ball toy called a Kendama that seems to be popular with dozens.

To be honest, I was kind of hoping this would be the year Minecraft would be brought into our home and Zacharie could plunge into the geekery and coding of that wonderful world. In the meantime, I’m off to by my son a top that has been spun into a huge business because of the peer parenting pressure.