Pedalheads has long been recommended to us by our parent friends. They have sung the praises of the program that gets kids off their training wheels quickly, and teaches them how to ride a bike safely.

We enrolled Zacharie in Pedalheads in Calgary two summers ago, and he quickly started to pedal trainer free, but we didn’t keep up with the riding. Last summer I vowed to get him rolling on two wheels on his own, but relied on the training wheel crutch too much.

This year, we tried again. I removed the training wheels, we went to the park, but it just didn’t click. My wife insisted we do Pedalheads again. And wouldn’t you know it? They worked their magic once again, and succeeded where we failed.

They cover everything, from parented classes with kids in ride-on toys, to those on first time two wheelers, to kids ditching training wheels, and those who need to learn how to ride safely to school.

We enrolled Zacharie in the half day “learning to ride without training wheels” class, while Charlie was in a one hour class for kids who were just getting out of trikes.

Here’s how their week at Pedalheads in Calgary went. 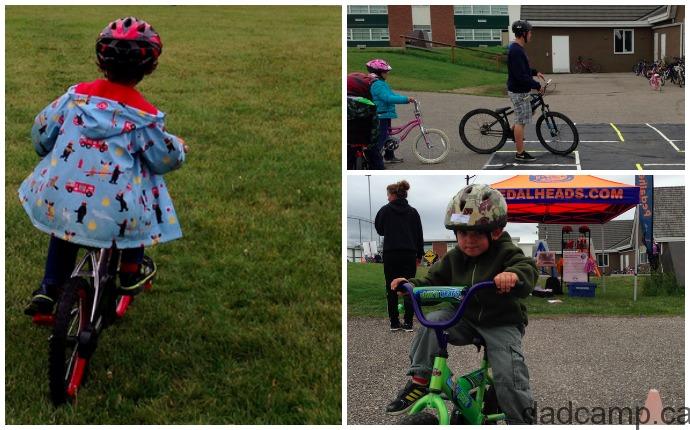 Day 1
Zacharie started the day having to be chased the entire way. He got frustrated, but one solid run on his own and 10 minutes later he was starting on the hill without help. By the end of the first day he was riding on his own and starting to figure out how to turn and stop.

Charlie’s class is about getting confident on a “big boy bike” and ditching his tricycle. They played bike bowling, did laps. practiced going back and forth. He has been clinging to his trike, but showed no fear in this class.

Day 2
When I arrive at the camp with Charlie for his mid-afternoon start, Zacharie and the instructors are huddled over his bike. He had a crash, and some bolts came off his front wheel. The good news? Zacharie was riding on his own, on pavement. He’s learned how to ride slow enough so that he can stop properly, and he has control to start from a standstill. He’s still missing that front bolt though.

Charlie’s class is fun. He’s learning about safety, and just to have a love of biking. They flipped all the bikes over and were learning the different parts like “frame, handlebars, and pedals.” He’s nowhere near getting the trainers off, but this class isn’t about that.

Day 3
By Wednesday Zacharie is doing a pylon obstacle course and doesn’t want to get off his bike.

Charlie’s class is still about encouraging. They play games riding their bikes across a small lot, read stories, and keep studying their bike parts. 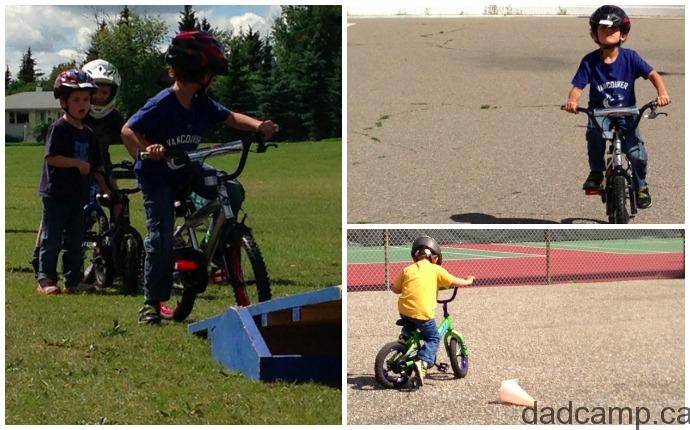 Day 4
Zacharie’s session has more and more riding in the empty lacrosse box. They practice stopping safely, speeding up, slowing down, and turning their head. There was a drill where they had to ride forward, but turn around to look at the instructor to see how many fingers were up. This helps the kids be aware of things in all directions instead of staring at their handlebars.

Day 5
By the end of the week of classes, Zacharie was riding straight down a huge hill. Well, huge in my books. He started at the beginning of the week needing the hill to get momentum to ride. Now he can start, stop, turn, speed up, slow down, and barrel down mountains all on his own and with big confidence. What a difference.

Charlie’s class progressed with more turning skills. They practiced aiming for sponges to ride over, maneuvered through more obstacle courses, and practiced how to safely stop. Chooch has gone hard every single day this week. He started out not wanting to leave his trike, now we can’t get him off his bike. By next year, he’ll easily be off his training wheels and ready to two wheel on his own.

You’ve still got time to get your kid enrolled in a class. There are openings for full day, half day, or one hour camps throughout August. Hit Pedalheads.ca for more information.