Never mind the politics, what are these leaders like as parents?

Many in the Yummy Mummy Club are wanting to #momthevote by raising family issues in the current campaign. Let’s take it one step further to find out just what kind of parents these leaders are as I try to #dadthevote.

Only one of the federal leaders has a perfect record when it comes to marriages. Ignatieff and Layton are on round 2, Elizabeth May has a daughter, but never married the father, while Stephen Harper’s wife Laureen counts Steve as husband number 2.

It’s only Bloc Quebecois leader Gilles Duceppe who stands alone as the model man of marriage. He and wife Yolande were married in 1978. They have 2 daughters, Amelie and Alexis along with 3 grandchildren Emile, Jeanne and Lucas.

Political blood runs through many of our first families. Duceppe’s dad was one of the founding members of the NDP in 1961 Canada leading Gilles to a politically active life at an early age. Jack Layton comes from a long line of politicians.

His great-granduncle, William Steeves, was a Father of Confederation. His grandfather, Gilbert Layton, was a minister under Duplessis in Quebec while his father, Robert Layton, was a Progressive Conservative cabinet minister in the 80s. Layton’s son, Mike, has even taken up “the family business.” He was elected a city councillor in Toronto in 2010. 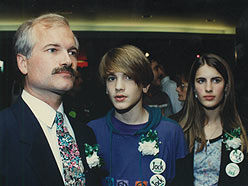 While the Laytons live and breathe this political stuff (Jack’s daughter Sarah and his granddaughter Beatrice joined him on stage to open the latest election campaign) Michael Ignatieff’s family tries to turn the other cheek at the dad who might be Prime Minister.

Theo and Sophie, both from Ignatieff’s first marriage, are in their mid 20s and keep a distance from the campaigns.

“I like to keep my children out of this,” Ignatieff told the Toronto Star last summer.

“They do their thing. And I want to respect their privacy. But they’re very supportive. They think their dad’s crazy.”

Ignatieff’s family life is not a shining mark on his record. The divorce from his children’s mother was a public nasty affair overseas and there is suggestion other parties have tried some muck raking to open fresh wounds.

Sophie graduated from the University of Edinburgh last year while Theo lives and works in Toronto. Ignatieff rarely speaks about his children in public, perhaps because of the messiness of the past and because of the learning difficulties Theo lives with that Ignatieff says “impedes his ability to succeed.” 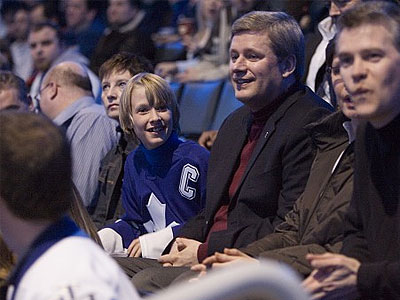 Stephen Harper is the only leader still with school aged children. Benjamin Harper, (Yes, the piano playing PM has a son named “Ben Harper”) was born in 1996, his younger sister, Rachel in 1999. As the Prime Minister, his private life is more in the photographer’s lens and he has brought his children along for many official events. It’s not uncommon to see Mr. Harper taking them to school when classes start each fall or sitting in the stands wearing a Leafs jersey in the winter.

I’d tell you a little bit about Green Party leader Elizabeth May and her daughter Victoria, but that’s perhaps better saved for Victoria herself. She penned this piece from The Yummy Mummy Club about her own Yummy Green Mummy.

The span of family experiences our leaders share is a quick look at Canada. There is a first shot at love that has succeeded. There are babies before marriage, stepmothers and bitter breakups. There are those who struggle to get by and those who strive to continue the family legacy.

Love them or hate them, just peak inside their kitchens and look at who sits around their dinner table and you’ll realize that those “nasty politicians in Ottawa” are just like us. They’re moms and dads trying to raise their kids right and give them everything they can to do better.

Yes there is rhetoric spewed on the campaign trail about “working families” and their needs but just look at those thumbnail sketches and you’ll realize it takes work to make every family work – and we always don’t get it right the first time.

Advance polls for the current federal election start to open this weekend. We’re all busy parents, so if May 2 isn’t going to fit in your crazy schedule, please visit the Elections Canada website to find out where the advance polls in your area are and when they’re open.