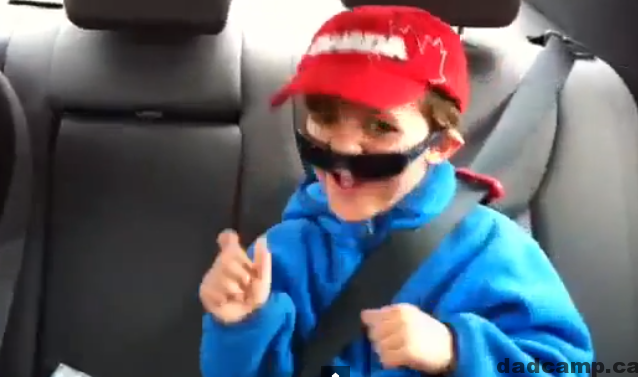 [twitter]Children music, for the most part, sucks. It doesn’t have to suck, but usually it does.

But transition your kids to the radio and pop music and you’re in for an entirely different world of hurt.

When Zacharie was a toddler, he loved singing along to Pavarotti. He’d bow when the crowd clapped, and he’d wave his hands and open his mouth wide like he was singing Nessun Dorma.

Yellow Submarine was a favorite too. He loved marching to it so much that we had it as our recessional song at our wedding in hopes that the music would inspire him to march us back down the aisle.

The 4 years in between has been filled with some Backyardigans cds in the car, and mostly talk radio or oldies. I work for a classic hits radio station, so the music the kids have been exposed to is mostly older classics.

Zacharie’s is starting to have that click and connection in his head for music, and he wants to hear more of it.

He’s danced to LMFAO, he’s gotten his Bangarang on with Skrillex, and now Zacharie is asking for Trevor Guthrie‘s This Is What It Feels Like to be played on repeat in my car. He’s learned every line, he sings it loudly, and he loves it. Over. And over. And over. And over.

“Again, Daddy!” Come the squeals from the back seat when a favorite song is over.

And so it begins.

I’m so glad I don’t have the pop music on in the car all the time. As cute as Sophie Grace and Rosie can be, I’m glad my kid doesn’t want to be Nicki Minaj or Rihanna. The music is fine, as an adult I have no problem with it, but when you start to hear the lyrics coming from the back seat?

Rihanna doesn’t want you to blame her for your kids singing her lyrics. She’s fighting back against criticism of her latest video by claiming she’s not anyone’s parent.

“I’m a 23 year old rock star with NO KIDS! What’s up with everybody wantin’ me to be a parent? I’m just a girl; I can only be your/our voice! Cuz we all know how difficult/embarrassing it is to communicate touchy subject matters to anyone especially our parents!” she wrote. “The music industry isn’t exactly Parents R Us! We have the freedom to make art, LET US! It’s your job to make sure they don’t turn out like US.” [source]

She’s got a point, but it doesn’t make me any less uncomfortable.

This will probably change in a few weeks when Zacharie heads to grade 1. You can try and set your kids up all they want, but as soon as they’re around peers and children of parents with different priorities, it all goes out the window.