This is why HD TV was invented, I thought. I was immediately lost in the bright azaleas of Amen Corner. I felt like I could read every putt right along with Tiger Woods.

HD TV is what helped me fall in love with The Masters, and this weekend, I was supposed to be walking the fairways of Augusta National. Except I’m not. I’m in the basement, observing a Masters Tradition. I’ll get to that in a moment, first the story of how I should be in Georgia.

Last year, I entered the draw for the chance to purchase tickets to golf’s first major tournament, and I was selected. I had the chance to buy tickets for Round 2 on Friday.

Wow. I got permission from my boss to take 2 days off during a busy time of the station in April, and by June I had bought the tickets. 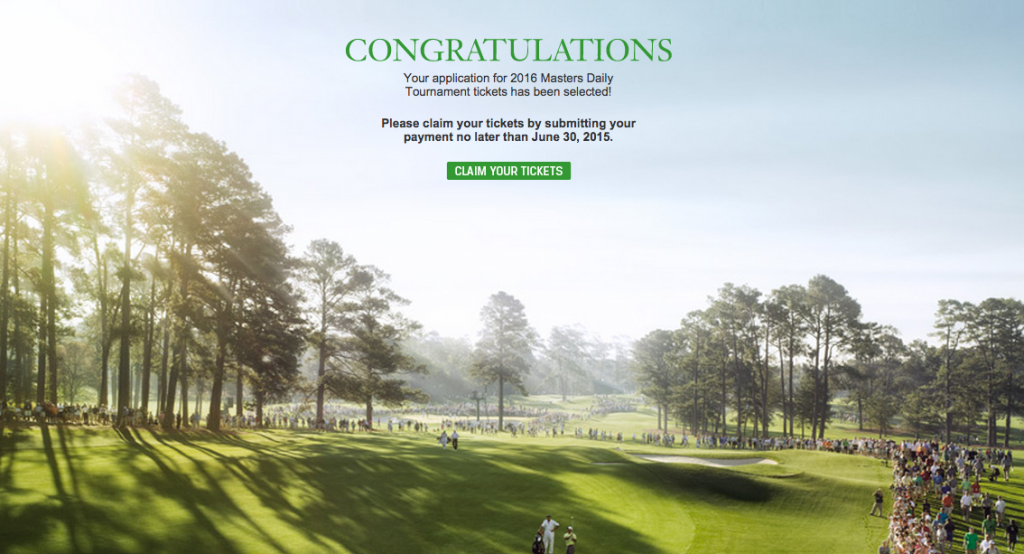 By January, when the tickets arrived, the friend who I was going to go with backed out. He said it didn’t make financial sense this year. I asked a few others and they weren’t up for it either. I looked at my bank statements and realized I should be smart and move them along instead of spending $2000 on 4 days in Georgia.

So I flipped them to a colleague who, at the last minute, lost his job and also passed. Then I passed them along to a fellow dad blogger who was excited to take his dad and experience the greens of Augusta. I was thrilled. What a wonderful moment.

Except his dad got sick and he too, at the last minute, had to back out. By this time, the tickets were with him. He asked me what to do and suggested we flip the tickets on StubHub. I agreed, thinking the $100 tickets might get a small premium on their face value.

A few hours later he emailed me to say our tickets had sold for nearly $2000. We agreed to split the money between 2 of our favourite charities (Camp Kesem and Team Diabetes) and found a silver lining in our inability to make the pilgrimmage to Augusta.

Which brings me back to my Masters tradition. This year, I get to maintain it. I’m not walking the fairways of golf’s most brilliant cathedral, no; I’m doing my taxes. The second week in April falls perfectly towards the end of tax season. I’m not good at completing my taxes on time, so for the past 4 years I have circled Masters weekend on the calendar as the weekend to do my taxes – and watch some golf.

This year I’m watching it on a Samsung again, this time it’s a slim Samsung 50″ Ultra HD 4k TV and I’m still in awe of the majesty of this course.

Is it the next best thing to being there? Perhaps. This is the only weekend our Family Entertainment Room is a Man Cave. I usually play 2nd or 3rd fiddle when it comes to choosing the entertainment on the biggest screen in the house, but not on the second weekend of April.

No, it’s golf and taxes.

Disclosure: Thanks to Best Buy for working with me to redesign our Family Entertainment Space. The Geek Squad were awesome with their service and even came by for follow-ups when I couldn’t figure out how to make the dvd player work. The service was top notch all along.