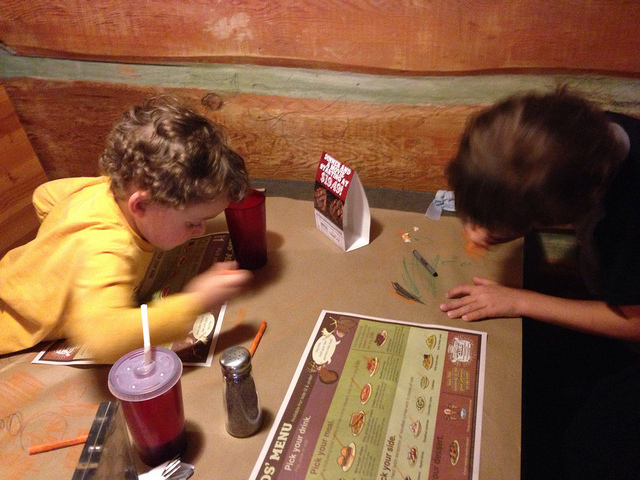 [twitter]When it comes to eating out as a family, there is only one restaurant we go to: Montana’s. It is, simply, my kids’ favorite family restaurant.

At first I felt guilty going there, then I realized this place is built for families. While some restaurants actively take steps to discourage families with children from ever coming in the doors, Montana’s welcomes families with open arms.

Kids Eat Free on Tuesdays at Montana’s and they have a roving balloon animal artist making things for the kids. If you’re not there by 5 minutes after 5, you’re waiting for half an hour.

They have change tables in the men’s room. They have little stools for the kids to wash their hands. They have a wide ranging kid menu that even offers up cucumber slices!

They have little cardboard canoes for the meals. They have crayons and brown paper table cloths to scribble on. The dessert is a very family friendly collection of 3 mini ice cream cones (one for Mom, Dad, child .. at least that’s how we explain it to the boys).

But they don’t have kid friendly cutlery. It’s a kid friendly restaurant, but as 3 yr old Charlie demonstrates below, you have to remember to BYO fork. 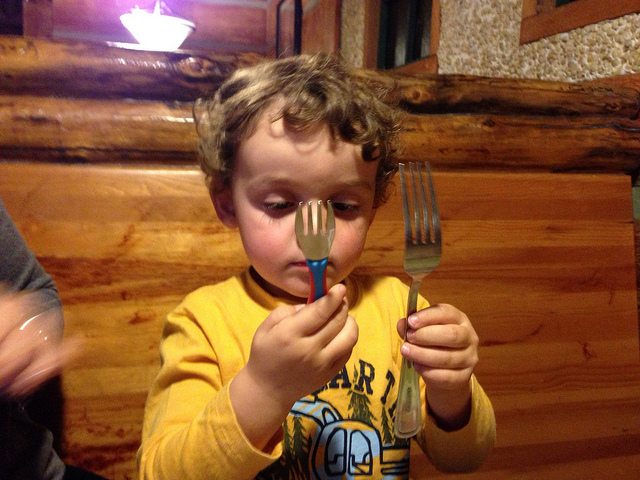 So I tweeted Montana’s to share the idea. No response. Nothing. Crickets. In fact, look at Montana’s twitter stream and you’ll see it’s nothing more than a megaphone. Zero engagement.

So I posted a note on their Facebook page asking to speak with someone about their social strategy, and they deleted it. No response, just a delete.

Now I’m not an expert in social media, but I play one on the internet. I poked up and down Montana’s website for contact information, and had to make 3 phone calls and leave a message before tracking down anyone who could explain their social strategy to me. Ideally, this could have been done by my reaching out on one of the social networks, but as detailed before – they don’t respond.

And, as expected, nobody returned my voice mail either.

I am a fan of Montana’s. It is our favorite family restaurant. We are there at least once a month. Any time there is anything to celebrate, we are there – and not just when the kids eat free. I have honest feedback that will help the company, and I’ve had the door slammed in my face.

Is this a big deal? No. I just wanted to suggest they have kid-sized cutlery.

Having a Twitter account for business is like posting a phone number for a 1-800 feedback line and never answering it. Just letting it ring and ring and ring. I don’t want to brandjack Montana’s, my kids love it there and I think it’s a great place for our family to have a night out but .. they need to fix their social strategy. When a huge fan of your brand weighs in with an idea, on a network you endorse, a response should be forthcoming.

Quickly too, because my wife could be convinced to love White Spot just as much.