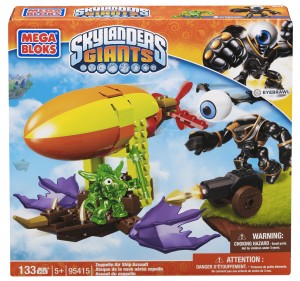 [twitter]We don’t have a video game console in our home, so that means I miss out on some huge kid trends. Skylanders Giants would be one.

You don’t have to play the game to appreciate the kid appeal in these characters. This week saw the release of Mega Bloks® Skylanders Giants™ Zeppelin Air Ship Assault, and my boys were immediately attracted to big colorful zeppelin and the chance to play with a flying eyeball.

As much fun as it is for free play with building blocks, getting a kit like this makes for some good father/son time. Zacharie can help sort the pieces, and since the instructions are all in pictures, he can follow them on his own. When all is done, he’s got a cool toy that he built “by himself.”

Now, eventually the basket falls off the zeppelin, a wing breaks off the basket, or some other piece falls out. That’s usually when it all gets mixed in with the bucket of other bricks and something new from their imagination is born.

Ideal for kids aged 5 and up.

This sponsored content was provided in exchange for a donation to Team Diabetes Canada.