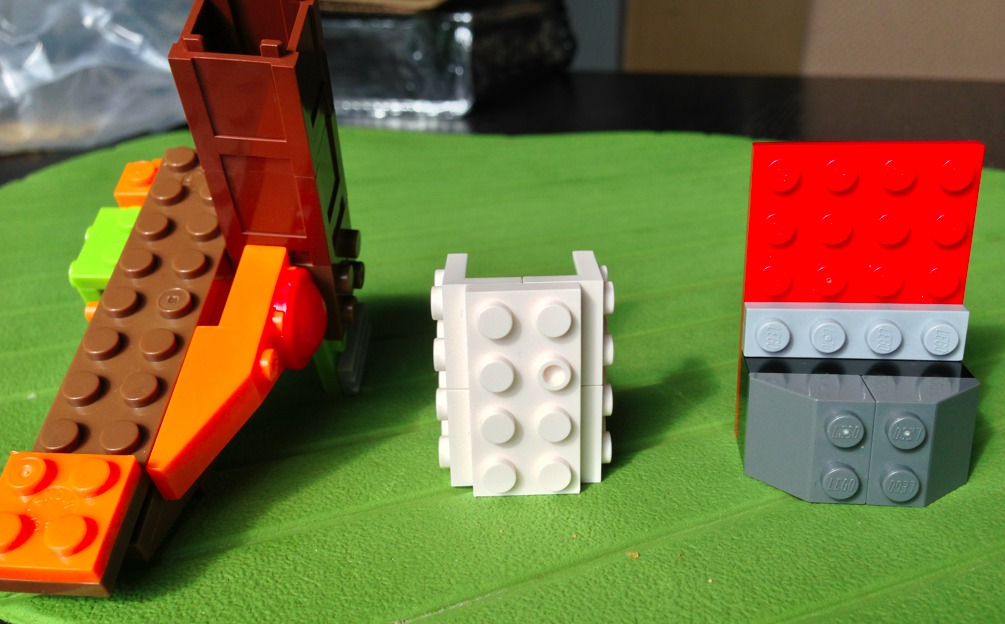 If you’ve got a train crazy kid, you can buck up for the real Thomas the Train branded tracks, or you can go for the generic kind. Imaginarium, Ikea, even the toy store at the kids’ market all sell versions of the track that “work together with popular brands.”

Problem is, they don’t. It’s not quite the same. The curves don’t quite match, the connectors don’t quite fit, and the ride isn’t quite as smooth.

There’s nothing wrong with them, they just don’t go together as well as the very expensive original.

I’m now discovering the same thing about Lego and competing brands of building blocks. Over the past few months, Zacharie and Charlie have received Mega Bloks and Kreo sets and I’m realizing – they’re not quite Lego.

After many challenges in court, Lego has been found to have a trademark on their product, but the patents have expired. This means interlocking building bricks can be made by Lego copycats, they just have to look a little bit different. There are nearly 20 different Lego clones on the market.

It’s interesting to see the differences the Lego copycats have made in creating their blocks, while still making them compatible. Kreo, for example, has a hole in every block. The top isn’t all nubbles, one of them always has a hole in it. And they include branded blocks to use as staging tools while you’re building the model.

Kre-o minifigs are also more moveable than traditional Lego minifigs. Their legs move out sideways, although the hair doesn’t seem to stay on too well. While the Lego faces are pretty generic, the Kre-o ones actually look like the real life actors they’re portraying. That is a very good likeness of both John Cho as Sulu.

Mega Bloks’ bricks look just like Lego, but don’t have the branded Lego logo on the top of each nubble.

The thing is – they just don’t click together as well. They’re lighter, and not as sturdy. The designers for the Lego copycats have done exciting things like add lights to the bricks, and they have many different pre-molded bricks to have wild shapes for their models, but it’s just not the same.

Yes, both Mega Bloks and Kreo are compatible with Lego. Yes, they’re cheaper. Yes, it doesn’t really matter about the model because 5 minutes after you’ve finished building it, something snaps off and it all ends up in one big smorgasbord potpourri mosh pit for your kids to pick through and rebuild something from their imagination.

WILL THE KIDS NOTICE?

It’s like the Thomas track incident. The original creator just fits a little better than the follow-up imitations. When you build, try to use the bricks from the same eco-system so they fit together just a little bit better, but you’ll probably be the only one who will notice because your kid just wants to build a green and orange and white flying garbage truck with dinosaur wings.

And all of the brands can feed an imagination with equal nourishment. Find what you can afford, and what your kids want to play with. They all end up in a big brick soup in the end anyway.