[twitter]Which came first in your relationship: the baby or the wedding?

My wife and I got pregnant. Bought a house. Then got married. We were even “pregnant enough” with baby #2 to announce the news to the guests at our wedding.

Snooki has done a double announcement this week: she’s pregnant AND engaged.

Why? Why is there this need to immediately get married when you get pregnant?

Natalie Portman, and Kristin Cavallari have recently done it. They both announced engagements at the same time they announced their celebrity pregnancies.

Is there really a proverbial “shotgun” staring you in the face when you announce your out of wedlock pregnancy to the parents?

Reese Witherspoon and Ryan Phillipe did it. Orlando Bloom and Miranda Kerr did it. Swizz Beats and Alicia Keys did it. Jessica Alba and Cash Warren did it. Ashlee Simpson and Pete Wentz did it. Usher and Tomeka Foster did it.

Maggie Gyllenhaal and Peter Sarskaard did it differently. They had a baby, waited 2 years and then got married. 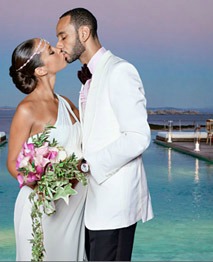 My wife and I like to say our first son chose us before we were ready to yet choose each other – and there’s nothing wrong with that.

Being thrust into parenthood when it wasn’t “necessarily planned” is tough enough, tossing the expectations of a marriage into that sleepless blender is a recipe for disaster.

Snooki is pregnant. Big deal. The fact she’s planning a shotgun wedding is a bigger deal.