SPOILER ALERT: The best way to get your kid interested in food is to make food interesting. Here’s how I do it:

You could have your kids offer input in scheduling meal plans, they can help with cooking dinner, or maybe you can make food interesting by taking them on a road trip to a massive greenhouse that produces 11 million heads of lettuce a year.

That last one is a little extreme, but Zacharie has promised he will eat more lettuce after we visited the Inspired Greens facility in Coaldale, AB. 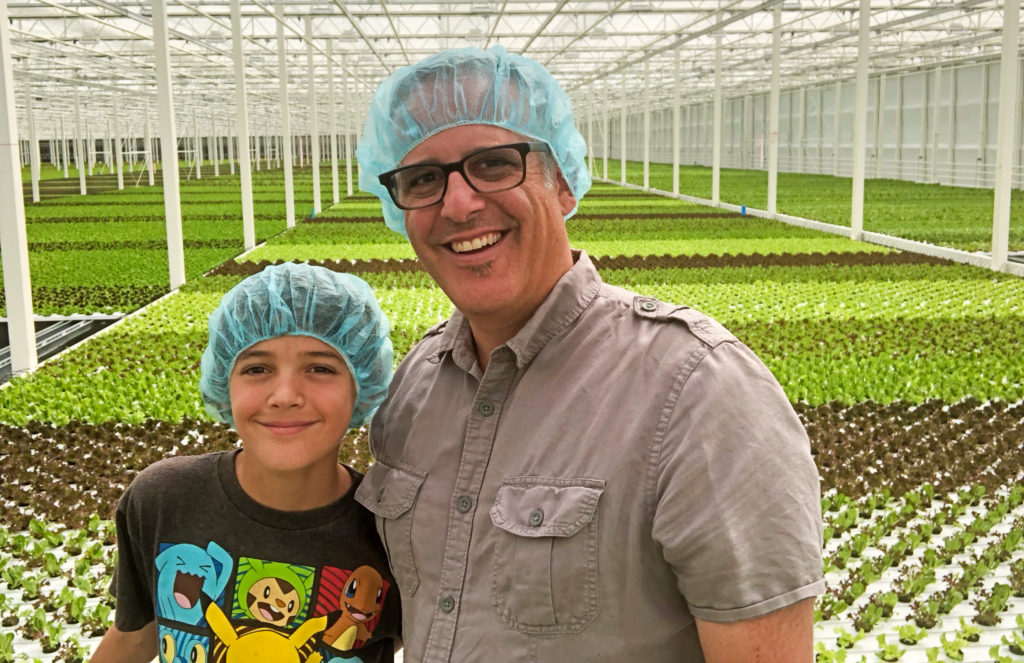 The idea for the field trip came when I noticed the big blue From Your Farmers signs that are hanging in Real Canadian Superstore. The blue signs highlight local and Canadian produce in the store. 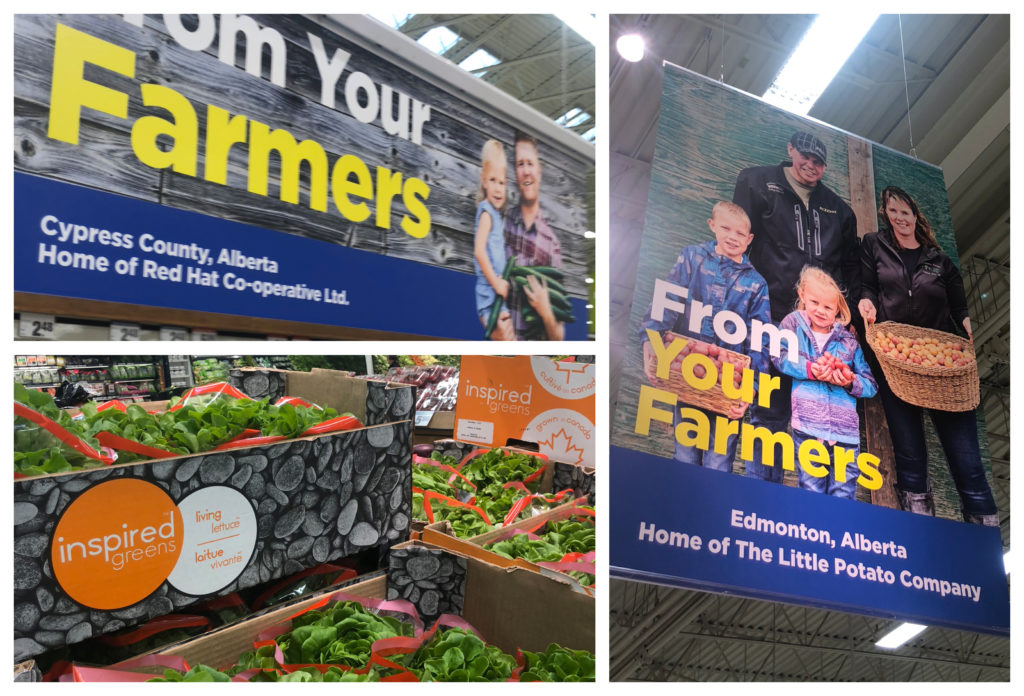 I’d never noticed them before, but once you spot one, you will see them everywhere.

There are blueberries from BC, radishes from Redcliff, AB, and baby potatoes from Edmonton. I saw one of the signs hanging above a display of living lettuce and turned the package over to find it was grown at a farm in Coaldale, about a 2 hour drive from our home in Calgary.

Coaldale is also home to the Alberta Birds of Prey Centre – a place Zacharie supports with his birthday money each year – so I suggested we do a day trip to visit the birds, and say thanks to a local farmer.  He agreed, and my scheme to get him to eat his greens was hatched.

Mike is the assistant grower for the facility and gave Zacharie and I our tour. 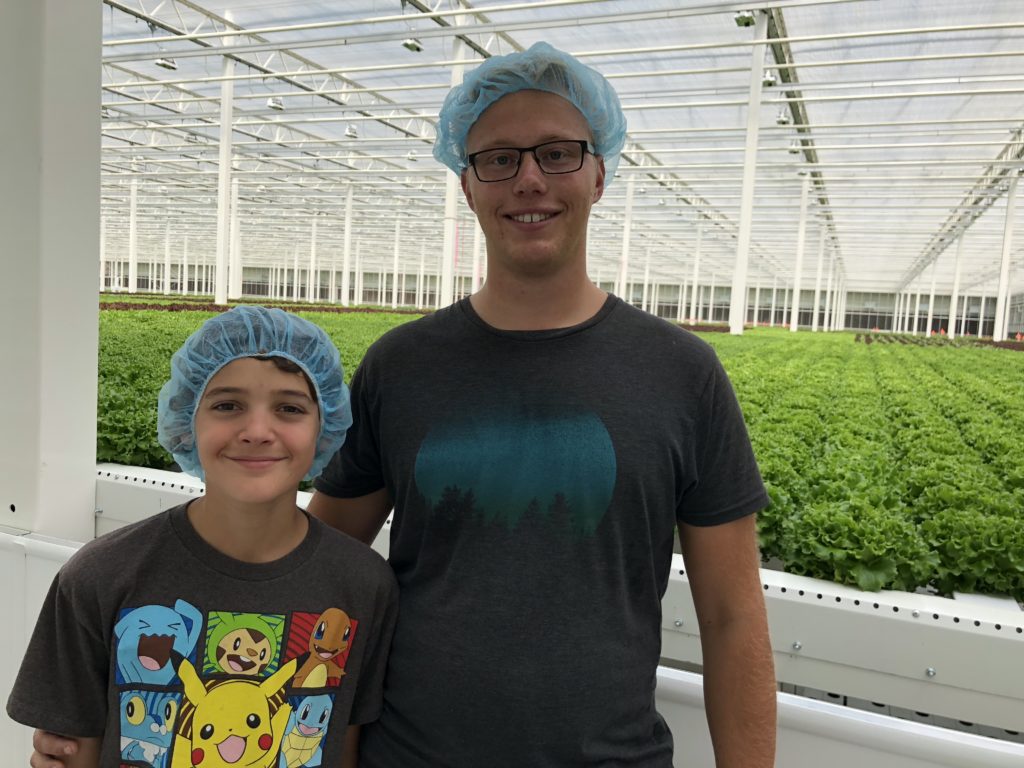 Greenhouse farming is just starting to take off in Alberta. There’s a strong pocket of them in Redcliff, just outside Medicine Hat, and the Inspired Greens facility in Coaldale has been running for just about a year.

It makes sense this corner of Canada would go to greenhouses, there’s more sunshine here than anywhere else in the country. There’s so much, in fact, that shades are pulled over the greenhouse in Coaldale to filter the sun and control the growing.

We donned our hairnets, washed our hands, removed all loose jewelry, and walked over a mat to scrub our shoes clean before we even entered.

Inside we found row upon row upon row of lettuce plants in different stages of growth being being shuffled around. From seed to harvest takes about 4 weeks, and Inspired Greens has a unique method of moving their plants through the greenhouse from one end to the other to get things done. 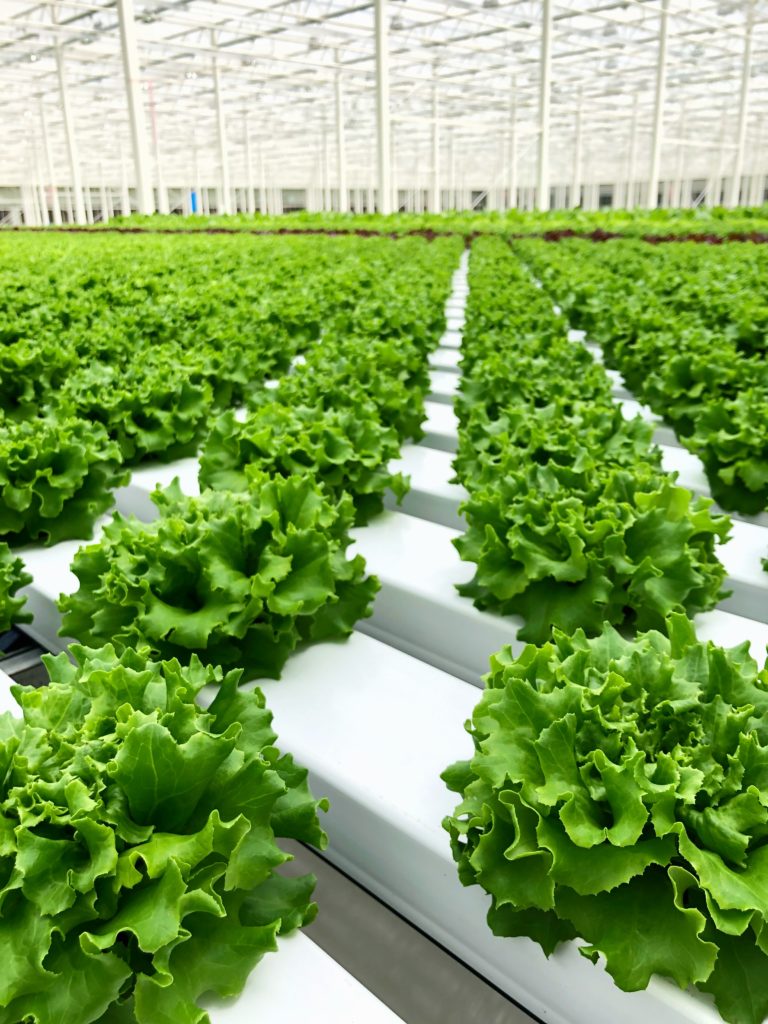 Their process is so unique, in fact, I had to sign waivers and agree not to take pictures of it. So let’s just say it’s very cool, and it’s been such a success they’re currently constructing another greenhouse that will double their production.

Zacharie and I saw the machines that plant the seeds, the room where they germinate for 3 days, and then the racks where they’re put into the greenhouse for the 4 week trip to harvest. 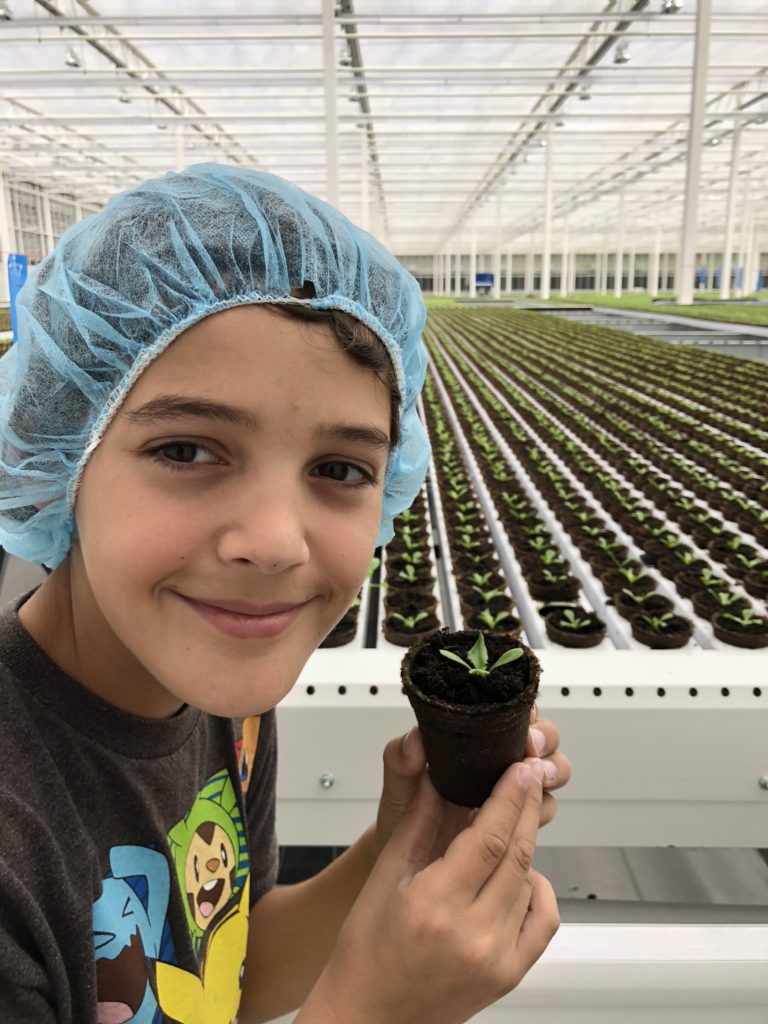 The Inspired Greens facility is a technological marvel. In addition to their unique movement methods, they grow everything in trays with water moving around the roots of each plant. Mike told us it can take dozens of litres of water to grow lettuce traditionally, say in a big field in California, but his facility constantly recycles their water and can grow a head of lettuce with less than 1 litre of water. 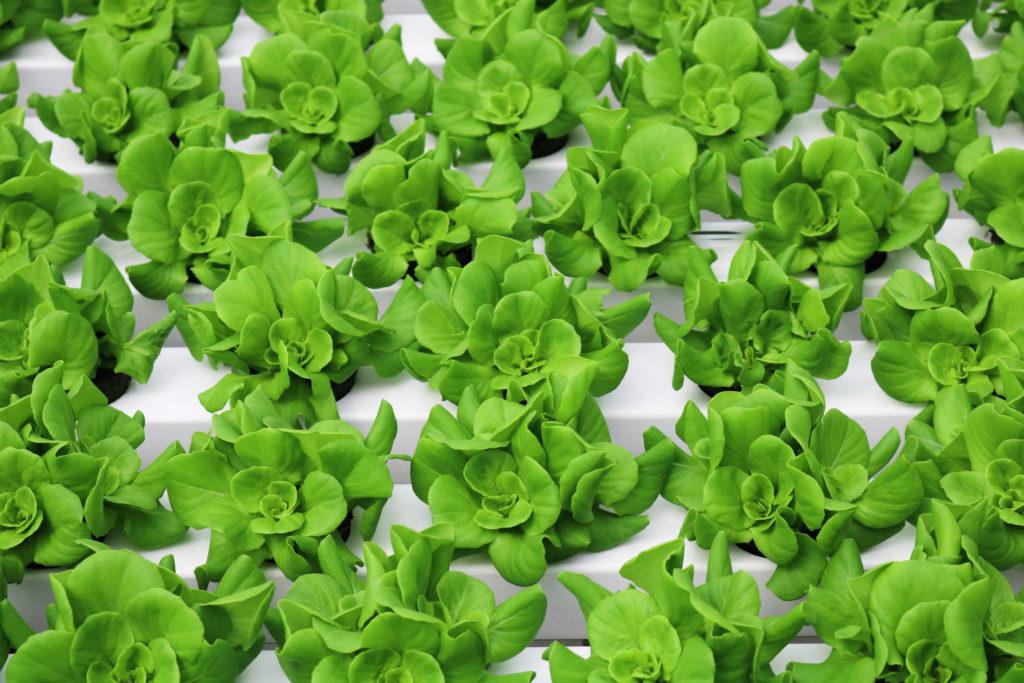 They also pull heat from their machines and generators to heat water that runs along the walls of the facility to regulate temperature inside. They use bikes high above the plants to help sort the crops, and they use them to ride from one end of the facility and back (it’s a very long walk).

And all those hairnets and handwashing and the like? That’s to keep contaminants out of the greenhouse. They don’t do any spraying, it’s just seeds, dirt, water, and sunshine. 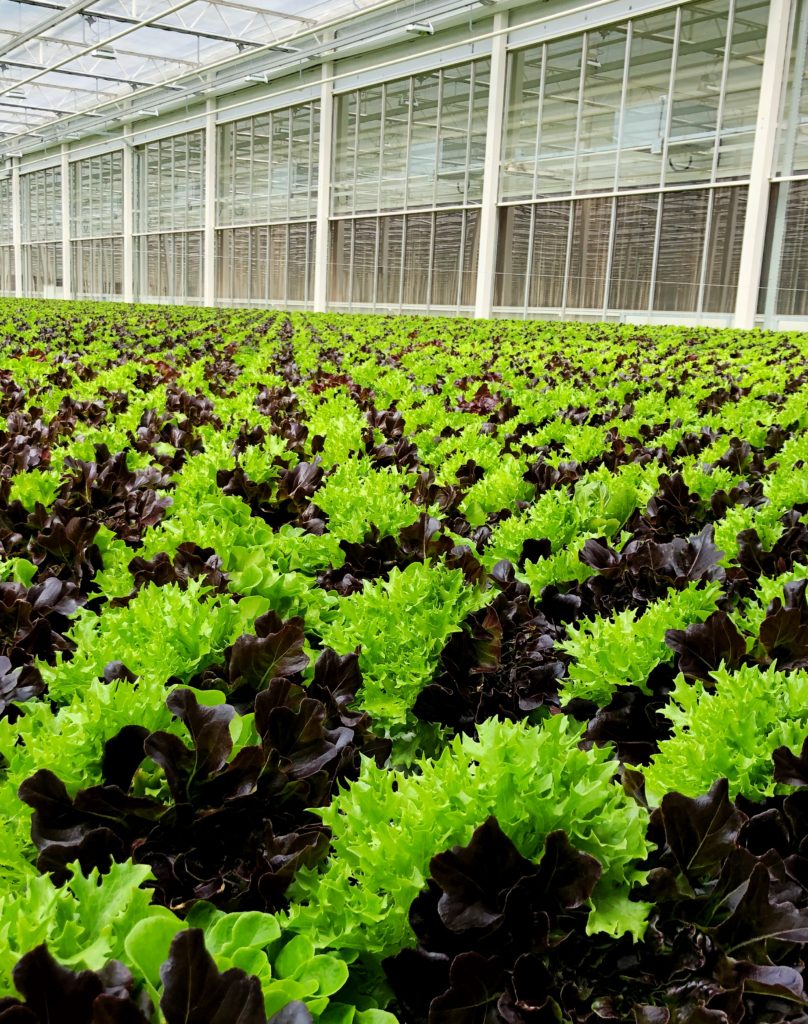 All of these procedures help them produce lettuce efficiently, environmentally, and deliciously.

Zacharie just thought it was really cool and dare I say .. interesting.

By the end of the tour, after we had thanked Mike and walked off with a bouquet of greens to bring home, Zacharie declared he was going to now eat more lettuce. 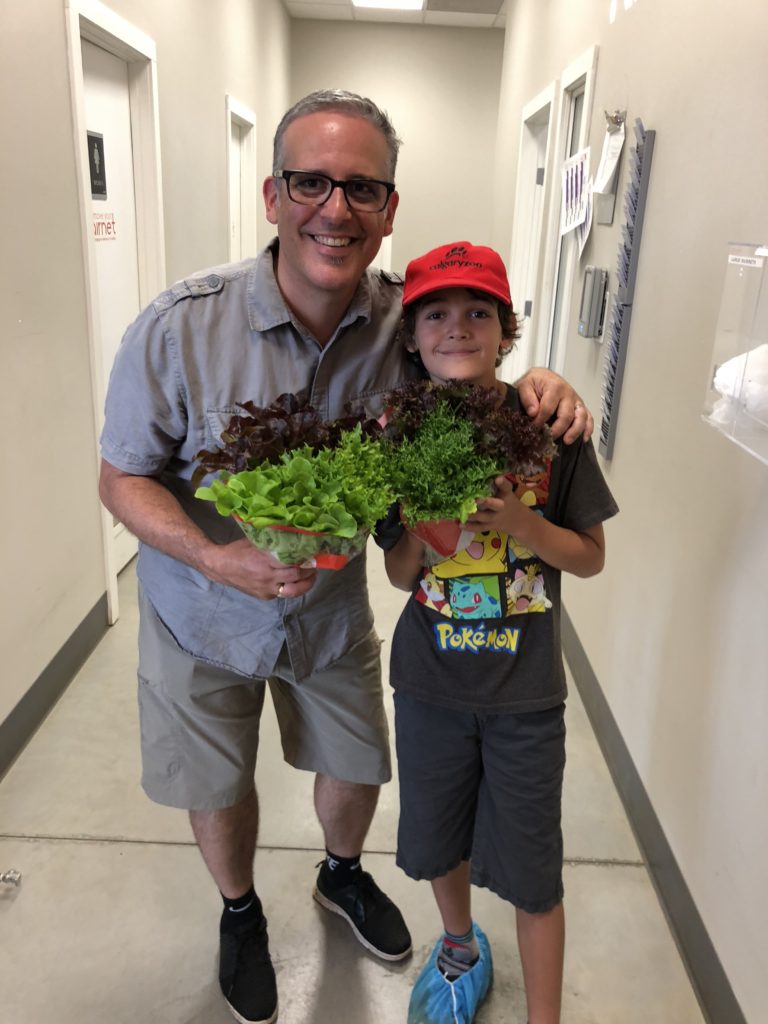 Moe than 40% of the produce sold at Real Canadian Superstore during the peak growing season is sourced from Canadian Growers.

On top of all wide variety of produce from local and Canadian farmers, Real Canadian Superstore has the largest assortment of organic products than any other store.

A wide selection of fresh, local, healthy produce all at a price that lets me get everything I need in a one stop stop? That’s #TrulySuper.