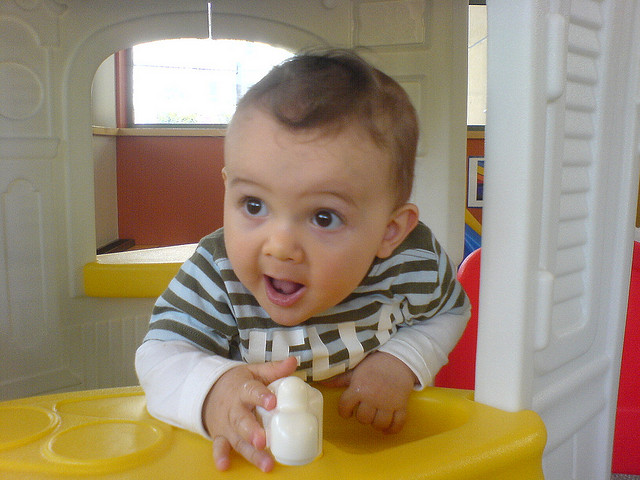 When you have one, daycare is affordable. Zacharie at daycare in 2008.

[twitter]For the 3rd time since the fall of 2011, we have a new nanny working for us. It’s not as posh as it sounds, this having a nanny thing.

Last year, our nanny cost us $21 000. On the surface it sounds like a lot of money, and when you factor in the tuition for the boys’ french schooling we basically handed over an entire after tax salary to others to look after our boys this year. Okay, that is a lot of money. But, $21 000 for two boys to be looked after is actually a bargain when you consider the nanny lives with us and can help easily cover for Parent-Teacher interviews, date nights, or errands.

We paid nothing for extra babysitting last year. If we had gone with a traditional dayhome or daycare situation, it would have cost in excess of $24 000 to look after the boys, PLUS we would have been on the hook for babysitting costs. A nanny also helps with light housekeeping, so when we need a load of towels done, a bathroom cleaned, or some vacuuming finished, she’s there to help.

So, for us, having a nanny is a good thing. Having them live with us isn’t always comfortable but, for now, it is more affordable than having a live-out nanny or putting them in dayhomes to fill in the blanks between our work schedules.

Then there’s the challenge in finding space. To get a spot in daycare, you need to get your name on a waiting list the day you get pregnant. It can take upwards of 18 months to get that spot. Getting a nanny is a little bit easier, but not by much.

Our first nanny lasted only a few months. We fired her when she let Zacharie climb on a table and hang himself. Our last nanny was with us for 14 months. She had made it known that she was wanting to travel come the summer, and so we were in an open contract since the first of the year. This was a great situation as it let us go out and search for ‘the one’ without an incredible amount of pressure. We had a 6 month window to get things done.

Jen did the searching for a nanny. She canvassed message boards, signed up for some nanny connection services (think dating sites, but for connecting nannies and employers), and used Craigslist and Kijiji.

The initial searching was painful. People not showing up for interviews. People lying about credentials. Shady agencies acting as middlemen. Divas showing up with designer purses. People who smoked applied. There were phone applicants asking what kind of car they would be given.

It’s not easy to find a good one, which is why they are often poached on the playground. Seriously, other families will start chatting nannies up and offer them more money, better perks, and steal them right there on the spot.

Our new nanny started this week – here we go again…