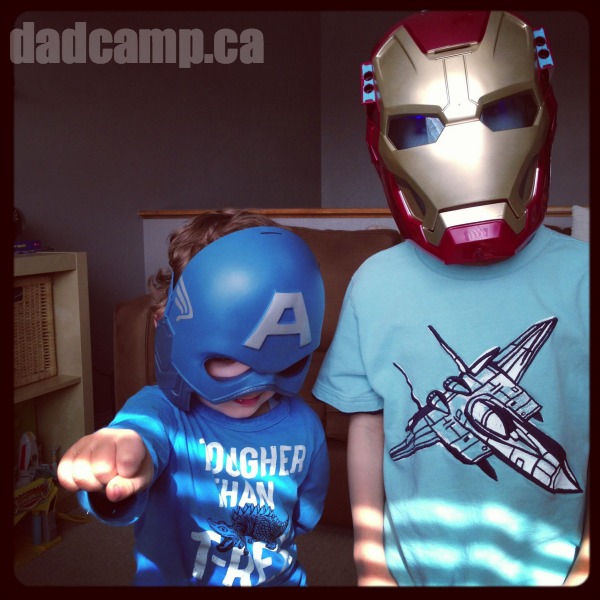 When I came home after work, my boys were pumped to open it up. “It’s from Iron Man 3!” Zacharie exclaimed. “Let’s open it!!” Except he can’t read, and he’s never seen the movies. The sticker on the side of the box with the picture of Iron Man was all needed to put it together.

“How do you know who Iron Man is?” I asked. “He has a light that shoots out of his hands, and he fights bad guys. I saw it on tv.” Ahh, there you go. Even though the boys watch a cartoon channel with limited commercials, or Netflix, he still got the message.

So I opened the box and the boys went Christmas morning crazy. There was the Patriot action figure, the Assemblers, and their favorite – the Iron Man mask. Masks have been a popular tickle trunk item in our house. We have Darth Vader, Spider-Man, Batman, C-3PO, and Captain America. They’re an easy cosplay tool when playing with action figures and have been a lot of fun for even Mom to put on and proclaim “I am your mother.”

When I was choosing the toys, I tried to find ones that didn’t shoot anything. It was hard, and even then, I still ended up with 2 of 3 toys that shoot something.

The Iron Man 3 Arc FX Mission mask has 4 missiles that shoot out of the side of the head and a laser target that projects from the top. It’s a cool innovation, complete with sound effects, but .. really.. wasn’t just a mask enough?

The boys will not be getting the missiles. 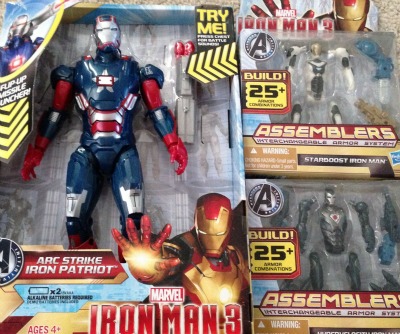 The Arc Strike Iron Patriot is a pretty cool action figure. He’s 10″ tall, has electronic sound effects, lights, voice commands, and all that jazz, but also has a missile pack on his shoulder that fires double-headed missiles.

The boys will not be getting the missiles.

The toys I’m looking forward to are the Iron Man 3 Assemblers. Each figure has interchangeable armor, so the kids can create more than 2 dozen different armor combinations on each figure. They can also swap the armor between figures, so there are even more combinations. It’s like action figure Lego. I’m down with that. And +1 to no missiles.

Call me uptight, if you must, but I don’t get why everything needs to be a gun. Am I hyper sensitive after countless kids killing kids with guns? I don’t know, I just know that I don’t even like my son holding a pistol-shaped squirt gun. It just looks so violent. So no guns, and .. no .. they won’t be watching Iron Man 3 either.

Disclosure: Hasbro sent me an email asking me to choose 3 toys that are being released in conjunction with Iron Man 3. No strings attached. The comments are my own and not directed by anyone.