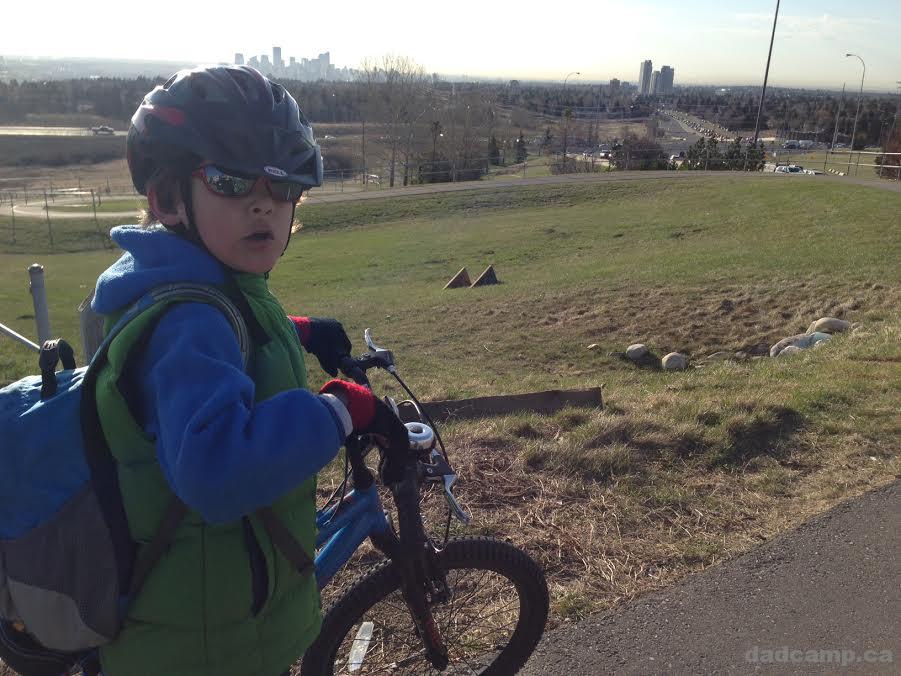 [twitter]I knew today wasn’t just any other school day when I came out of the bathroom just after my 6am ritual and found Zacharie waiting for me in the living room. “I’m ready to go, Daddy,” he beamed, fully dressed and ready for the day.

“Okay, well I’m going to have some breakfast so I have energy for today,” he said while getting out a stool to reach the high shelf for his favorite cereal.

Zacharie normally gets up on his own at 7. If he’s tired and sleepy I’ll have to chase after him at 7:15. Last night he couldn’t sleep, he was so excited. After putting his head on the pillow at 8, he came to our room 3 times saying he couldn’t sleep before finally crashing some time after 9. To say he was excited for the day would be easy.

Since some time in mid-February, Zacharie has been begging to ride his bike to school. Even the temperatures near -20 and weekly dumpings of 20+ cm of snow didn’t damper his requests. “When can I ride my bike to school, daddy?” became a weekly refrain.

I didn’t think it would be possible. As it stands now, I drive Zacharie to school on my way to work. He goes to school down a hill and across a major thoroughfare about 6km away. It takes us about 20 minutes to drive in the morning. His bell rings at quarter past 8, and then I file in with the rest of the commuters to arrive at the radio station before 9.  It’s a pretty stressless way to get things done.

But Zacharie wants to ride his bike.

There’s no way I was going to let him ride his bike by himself through the mess of traffic, but then one morning in late April I realized I could ride with him, and still have enough time to ride on to the office.  Still, with temperatures below zero, I wasn’t ready to commit.

Yesterday was after Mother’s Day. Sunday night he bouncing around asking to ride bikes. I held off for one more day just to make sure I didn’t need to be at work early. That meant today was the day, and that’s how I found myself standing in my kitchen, pyjamas hanging off my hip, sleep still clinging to my eyelashes, beaming with pride as my son struggled to reach the Cheerios. 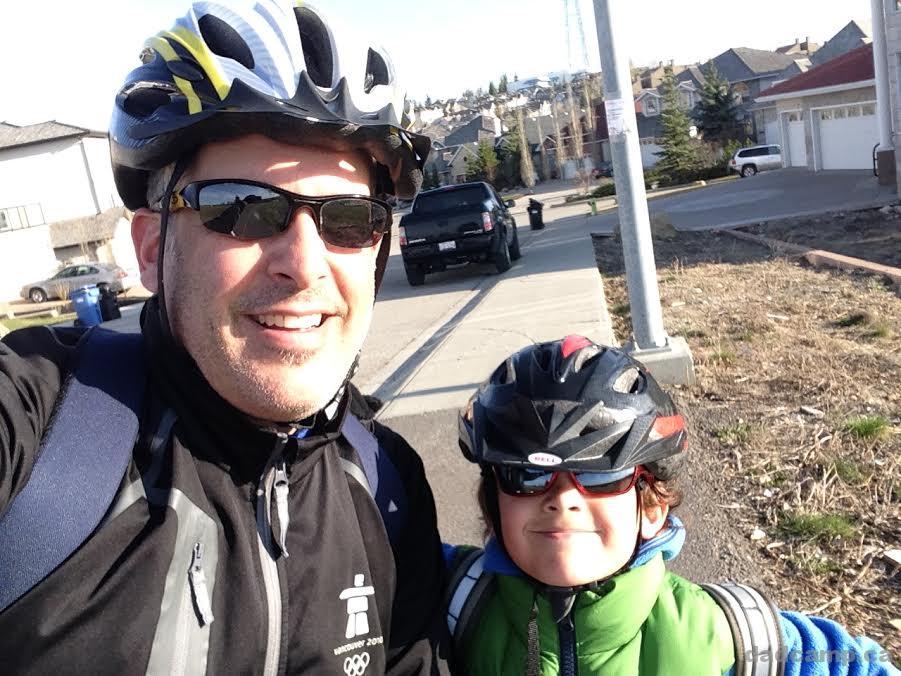 We put on our gloves and sunglasses, packed an extra cookie snack for the road, and waved goodbye to Mama as we left the driveway at 7:30.  2 blocks later we passed the school bus stop where Z confidently rolled past his peers who were waiting for the bus.

“You’re riding all the way to school?” the other parents asked astonishingly. “Sure am!” Z beamed and rolled on.

We took our time, stopping to walk across every crosswalk, riding the brakes pretty hard so we didn’t lose control on the pebbly roads.

When I say we live on the top of a hill, I’m not sugar coating it. Our neighborhood is the highest point in the city. We live 4 blocks from a bobsleigh track and the top of a chairlift at Canada Olympic Park. When the snow has melted in the city by the river, we still have drifts in the driveway.  The 5.5  kilometre commute would feature a 90 metre drop, so keeping Z’s speed under control was important. 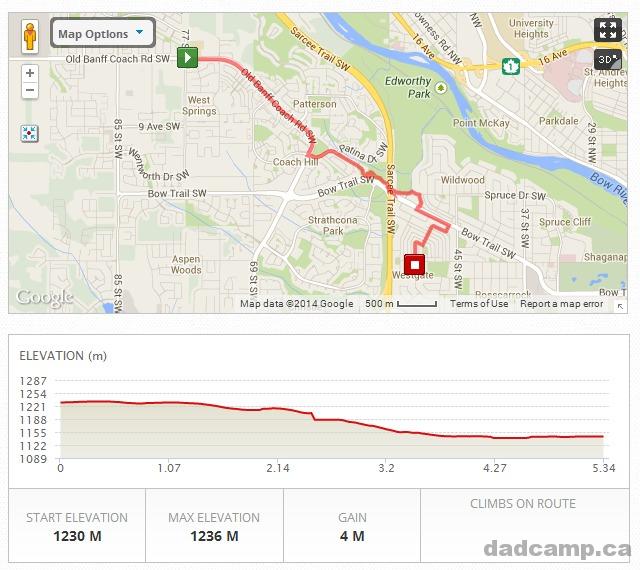 Once we ducked onto the cycling network, bikes zoomed past us. They dodged his swerving style, and we talked about the rules of the road and staying on your side. By the time we pressed the stop light to cross the road to get to his school, we passed right in front of his school bus.  With just 4 blocks left to ride, we had arrived at basically the same time as those kids on the bus.

Z’s chest puffed out as we walked our bikes across the playground to the empty bike rack. Empty because, in Calgary, kids take the bus. There are some 700 kids at Zacharie’s school, the number in the walk zone number a few dozen at most. It’s a commuter school, and with major arteries to be crossed between the student body’s homes and the school, very few ride.

Today, Z was one of them. We cheersed our cookie snack after finally riding a bike to school, then something wonderful happened. Zacharie, for the first time all year, said I could leave. He usually asks me to stay with him until the bell rings, today, with his helmet tucked under his arm, he confidently strode over to the 7 or kids from his class huddled by the fence to brag about his big ride.  He didn’t need me.

I continued on the 10k to my office along with another 100m drop in elevation. It was a breeze. Riding a bike to school and then on to work was nothing tough at all. Going home? I’m sure that 200m drop becoming a climb will certainly tell a different story.

UPDATE: We may have arrived at school the same time as the bus in the morning, but hill karma came back and got us on the way home. We arrived home an hour after the bus would have dropped Zacharie off. The trip to school was about 30 minutes, the ride home was closer to 80 minutes. The 6km bike ride turned in to a more than 3km walk as I pushed both bikes up all the hills and Zacharie toddled behind.

Jen warned me he wouldn’t be able to do the hills, and I knew he wouldn’t be able to either, but I wanted him to fully experience hill karma so the next time he asks to ride to school he had an understanding of what he was getting in to. Sometimes, even though you know better, letting your kids fully experience the painful consequences of their actions is the best way to teach a lesson.

I offered Zacharie another day of riding bikes this morning over breakfast. “No way, Daddy!” Mission accomplished. 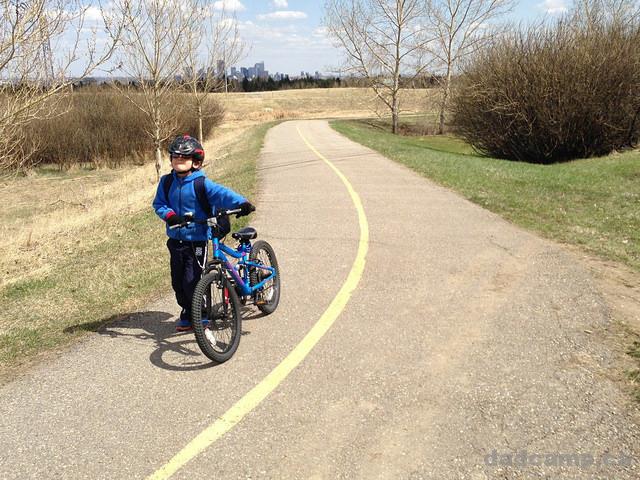