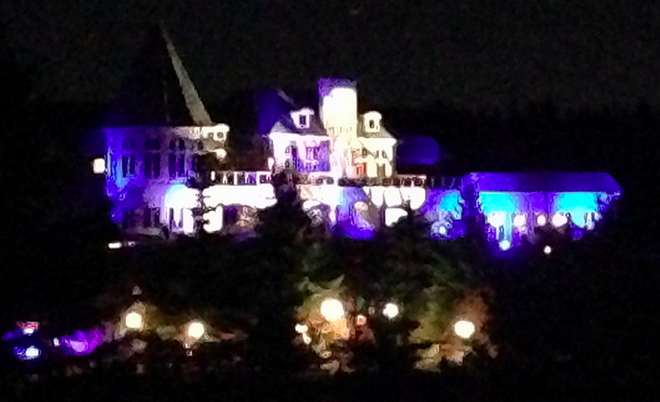 We went to a Halloween party last weekend. We lasted an hour. Does this make me an uptight parent?

One of Zacharie’s friends has a very big house, and they do up Halloween equally big. They hire actors to act as zombies along their 1/8 mile driveway spooking people and popping out of bushes. There were corpses hanging from their indoor gym equipment, rats were projected to be crawling on the wall, and I don’t want to know what was supposed to be floating in their indoor pool.

The kids were mostly grade 2-6 at the party and they were running wild. W.I.L.D. And we should have known this. The day before the party, the hostess sent an email reminding people about the zombie actors and to ask their kids not to throw rocks at them as they had last year.

Well that message got through, but as our boys ran off into the night at the party in search of their classmate, we followed to get the lay of the land. The kids may not have been throwing rocks, but they were firing squirt guns, yelling at them, and firing all sorts of other gun-styled devices at them.

We turned around and went back inside where the boys bounced through the ball pit and bouncy castle in one of the living rooms (I told you it was a big house). Kids that were far too big to be in a bouncy were flying down the slides, and slam dancing in the mesh. A younger kid, maybe 4, was sitting in the ball pit and blasting balls into the face of anyone who would dare sit down near him.

I don’t like to parent other people’s kids, but when they’re drilling balls into your son’s face, you say something.

“Sorry, okay.” Drill ball in face of other kid. Wait, What!?