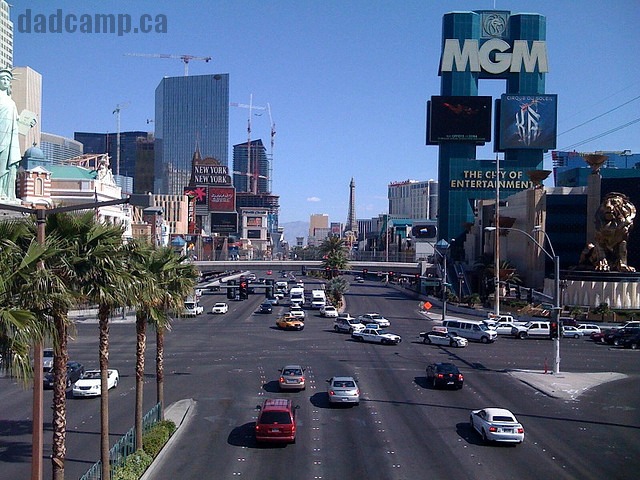 [twitter]I’ve been dreaming of Las Vegas lately. Maybe it’s because of this deal from JumpOn, but it has been 16 months since I’ve been to Sin City, that’s about the longest time I’ve had in between visits over the past 20 years.

Nearly 2 dozen times I have picked up a bag at McCarran International, and grabbed a cab for The Strip. The first time was in 1991. My best friend Chad and I stayed at the Hacienda, now long since demolished and replaced by Mandalay Bay. I remember seeing Caesar’s Palace in the distance and thinking it would be an easy walk. An hour later, we arrived at the tables, and a few minutes later I was broke. With 2 days left on our trip, I had spent everything.

Over the past 20 years I have been to Vegas for vacations, stags, conferences, birthdays, and a quick getaway. I’ve stayed at Planet Hollywood, Monte Carlo, Bally’s, Circus Circus,The Imperial Palace, and even the terrible demolished dive that was The Bourbon Street Hotel.

But this dream of a trip to Vegas has me thinking about something different. Instead of an adult trip, I’m wondering if it’s okay to go to Vegas with the kids. We’re looking ahead to Spring Break 2013 and trying to find a way to get away from winter without breaking the bank. We could do Hawaii, Mexico, Phoenix, or Palm Springs – but what about Las Vegas? Would a week (or extended weekend) with the kids in Vegas work?

There are many things to do in Las Vegas that don’t involve gambling. I know, that first trip to Vegas where I busted out in the first few hours taught me to seek out other ways to amuse myself.

Back then, the MGM Grand had an amusement park out back. Flat out of cash, Chad and I hung at a free concert stage in the park and, for 5 hours, watched 80s band The Jets do 4 sets. Crush On You, You’ve Got It All, we heard them each time. That was 20 years ago. Other trips had me taking helicopters to the Grand Canyon, riding the sling shot at the top of the Stratosphere, admiring the flowers in the conservatory at The Bellagio, climbing rock walls, heading out to the desert, and being goofy in Circus Circus.

On each trip, we see families walking The Strip with kids in strollers throughout the day (and well into the night). I don’t know if we’d necessarily go that far, but after reading this list of ideas for kids in Vegas, I’m thinking it might be enough of a playground for them to be a good idea.

Have you been to Las Vegas with your kids? What did you do with the kids at night and during the day?