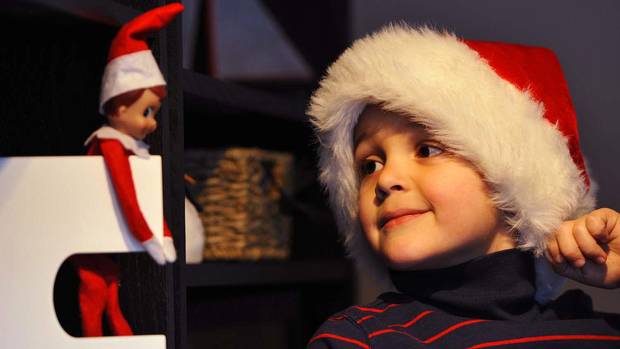 Dear Elf on the Shelf haters,

I feel you. I really do. The Pinterest perfection spamming every social network with Elf on the Shelf ideas annoys me too. Oh, your Elf took a poop and it looks like a Hershey’s kiss?! How clever. But, if you can ignore those who take it too far for a minute, there is magic in that cheap, creepy elf.

It’s the same thought process we must use with the teen pop stars. When Bieber was big, I actually wrote a defense of his music. “Justin Bieber doesn’t suck!,” I proclaimed. Just because the hardcore, passionate fans are in our face and skew the headlines, is it fair to dismiss the kid’s obvious talent?

“The instant and life-involving obsession pre-teen girls are bound to attach to anything they are interested in becomes an instant lead weight against credibility,” I wrote. “It’s like making a deal with the devil, you can have all the success of your dreams, but first you need to sell your (credible) soul.”

And so it is with the Elf on the Shelf. The rising tide of popularity it has created has brought the inevitable backlash.

I get it. It’s become too much. People are taking it too seriously. The oversharing of your friends has risen to such a cacophonous crescendo that you can no longer thumb scroll through your feed without seeing those creepy vacant eyes staring back at you through the screen, daring to tell Santa that you don’t believe.

Why do we do it? Why do we concoct all these crazy mythologies for our kids? From little green footprints on toilet seats, to hidden chocolate eggs, to swapping out missing teeth, why has parenting risen to David Copperfield levels of illusion-making?

There are those who go a little crazy with Elf on the Shelf and, frankly, they’re ruining it for the rest of us. The over-achievers set the bar high, the kids talk at school, and well .. suddenly my boys want to know why our Elf, George, doesn’t bake cookies and string lights in our house. George just sits there.

Could parents putting the Elf on the Shelf in silly situations be a coping mechanism? A way to help them believe they can still have grown-up fun surrounded by childish magic? Could Elves hitting on Barbie, swinging from tequila bottles, or playing poker with the stuffies be like the inside jokes in Shrek and other Disney Movies? Just a little something to keep parents interested in the silliness of childhood?

Perhaps. And yes, it’s a little much, but just as with Bieber, Miley, and One Direction, we can’t dismiss something because the fans are annoying. It’s okay to appreciate the Elf on the Shelf for our own simple reasons.

“As adults we don’t need to make Christmas magic for kids, we just need to not (mess) it up with our crazy,” Lyz Lens tweeted this week. And it’s true.

I, too, wish those who were so eager to share their cleverness would dial it back a bit. But that’s the world we live in. The Instagramming of meals, the tweeting of random thoughts, the Facebooking of freakish Elf behaviour.

Despite that, I look forward to every morning in December as the boys scurry around the house searching for our elf, George. Sleep stuck in their eyes, blankies dragging at their feet, hair standing on static end, they rush around trying to find this magical piece of plastic and felt. And when his hiding place is uncovered, they cheer “I found George!” and high five each other before running to tell their parents of their successful hunting expedition.

And, for a few seconds, the terrible news of the day fades away, the crankiness at the lack of sleep drains, and I smile too.

The impossible has become possible. And everything in the world is perfect. It doesn’t need to be complicated. Our elf never gets too wild, I don’t post daily pictures of what he does. He just moves around, sits on assorted shelves, and brings us immeasurable joy.

So get over it, Elf on the Shelf haters. This little guy is a wonderful addition to the magic of the season, and he’s not going anywhere.