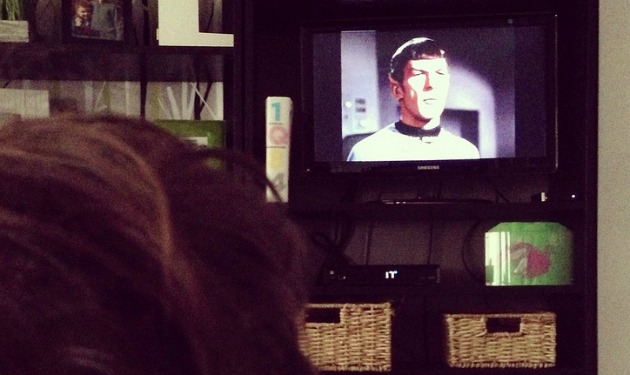 [twitter]When a box of Kreo Star Trek toys arrived this week, the boys were excited because it was “Lego”. They saw big ships, and lava, and cool dudes and were excited to build away.

But they didn’t really know what Star Trek was. Sure, Zacharie (and Charlie by osmosis) is a huge Star Wars fan. He’s a DOUBLE Jedi, don’tcha know, but the boys had never really seen Star Trek before.

“Star Trucks?” Zacharie asked when I told him what show the stuff was from.

We built the Genesis ship, and the boys longingly stared at the bigger Enterprise box (with more than 400 pieces) and asked to build that too.

“Let’s save it for a day when Daddy has a few more hours”, I said.

I showed them the minifig Kirk, Spock, and Sulu.

This was going to take a little more effort, so I flicked on the Apple TV, dialed in to YouTube, and pulled up original Star Trek episodes. And then, just as they were captivated by the original 60s Batman series, the boys were lost in a dream of imagination.

We watched The Immunity Syndrome, and the boys devoured it.

Then we went out side and had light sabre fights in the backyard. Some habits die hard, it would seem.