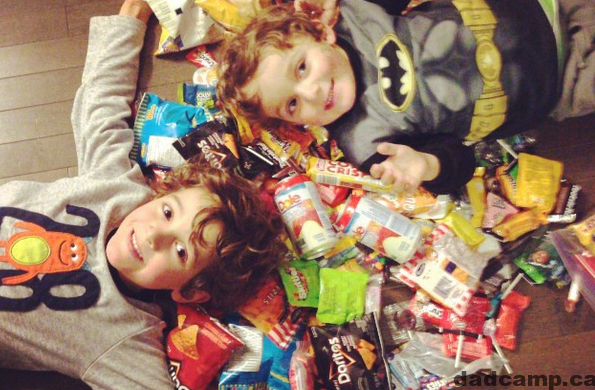 The boys loved it.

Now we’re left with buckets of treats, and while most of it will end up in the trash, or care packages, a good chunk will make its way to late night treat trays for mom and dad which makes Wine Access Magazine‘s Wine Pairing For Halloween Candy article so genius.

“Some Halloween candy just does not go with anything,” author Tom Firth admits. “These are the candies that are basically just 100 per cent sugar pressed into some shape.”

Still, if you must have a sip before bed and you’re going to raid the Switch Witch‘s Secret Stash, here are some fun wine pairings to try: “You can either try to match up the strawberry with the summer fruits typically found in rose,” says Firth. “Or go with the classic match of Champagne and strawberries.” “Pairing wine with milk chocolate is a little different from pairing wine and dark or bitter chocolate. Try wines with a little acid and some sweetness,” advises Firth. “American zinfandels and Aussie shiraz are safe and when in doubt, beer such as lagers or ales can be a great match with good chocolate.” Slashfood recommends a Malbec with the M&Ms. “Wow,” the site exclaims. “There’s already a bit of milk chocolate/malt flavor in most Argentinian Malbecs, which means it pairs appropriately with the chocolate taste mirrored in M&Ms.” Star Chefs recommends going old school if the Twix are your poison. “The cookie reminds me of Scottish shortbread,” the site says. “Perhaps a smooth Scotch might be a good match for the caramel? Something Highland, and on the rich, voluptuous side?” Aye! Trend Experience advocates a big Cabernet Sauvignon when ripping open the peanut butter cups. “There is something about the chocolate, peanut butter and the saltiness that seems to pair well with the Cab,” they say. “The original flavours in the red package are sweet and each colour has its own flavour,” says Firth. “Pair the mix with sauvignon blanc or an off-dry moscato d’asti.” “The similar flavours of Snickers and Skor are easy pairings,” says Firth. “If it’s something red you want, cabernet sauvignon is a good bet as is shiraz. If it’s beer, try a Guinness. It may blow your mind.” Hello Vino is all about the Madeira and Tawny Port wines if you’re digging into the caramels. The flavors of the two just dissolve together into one big mouth bomb. Sugar Loco says a Chardonnay will swim nicely with gummy fishes, bears, and other chewy treats, but keep them on the sweet side. Sharp, citrus, and sour candies will clash with the fruitiness of the Chardonnay. Colonial Wine Bar promises that if you take a swig of a 2007 Torre Quarto “Sangue Blu”, Negroamaro, Puglia, Italy after you pop a Whopper in your mouth it “will taste like a cherry milk shake.”

Don’t think you’re slumming it by digging in to the bowl and having a swig. Francis Ford Coppola‘s Napa Valley vineyard held a very posh to-do all around the Halloween Candy and Wine pairing theme!