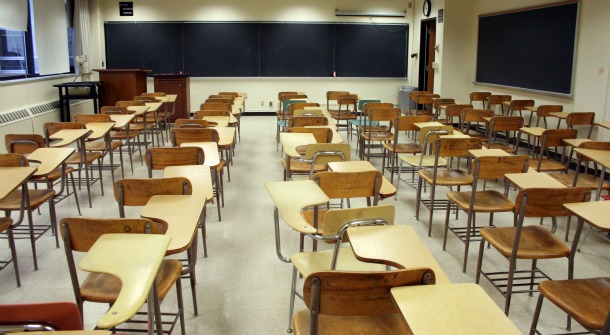 My wife and I went to an information night at our local french immersion elementary school last night.

Zacharie currently goes to a private school near our home for kindergarten, a luxury we can’t afford throughout his entire elementary schooling. So, in September, he will be switching to the public system and, after last night, I’m deeply saddened by the prospect.

We chose our home because it was near the private school. Z was 3 when we moved to Calgary, and this was a chance to get him in a french immersion program for preschool, junior kindergarten, and full-day kindergarten. It would be expensive, but we thought this kind of head start would be fantastic. And it has been.

But, at $10 000 a year starting in Grade 1, it becomes too much for our budget, especially now that our youngest is now at the school. Multiply it over the entire school career and we’d be looking at in excess of $250 000 to educate our boys from 3-18. And THEN University.

Sorry, that’s too much.

So we are moving to the public system, and it’s making me terribly sad.

Many other parents agree. The school has more than 750 students between kindergarten and Grade 5. Classrooms have taken over the library, and the teachers’ lounge. The school is bursting at the seams.

There are 8 classes of kindergarten children, and while the province mandates a 17-1 ratio of students, the classes are at 19. Decisions will need to be made before September. The school is overcrowded and there is no room. They will need to either move the kindergarten or grade 5 program to another school, and are open to other solutions.

I audibly sighed many times during the information night as the principal talked about funding, government regulations, and rules. We were not about to enter a program where students are put first, this felt like we were just getting sucked into the Borg. It felt impersonal, and structured where rules exist simply because bureaucrats say so.

That’s the other problem: distance. The population of Calgary expanded so rapidly in the past decade that the construction of new schools has yet to catch up. A rather complex network of busses has been set up to bring kids from the subdivisions to the inner city. Children as young as 4 are being put on busses for up to 30 minutes in each direction to attend a half day of classes that barely lasts 2 hours.

Common sense is gone. Calgary needs walkable communities, with schools. Calgary needs to stop the split system and duplication of resources by having a religious program soak up tax dollars that can’t be accessed by the majority of the population. Calgary needs to open more seats in language programs to meet the incredible demand.

We have been spoiled by 3 years in the private school system. I wish I could afford it for another 15 years.

UPDATE – February 2013
I need to add a footnote to this story. We chose to switch to this public school after much canvassing of people who have experience with the school. To a person, each one of them raved about the quality of education the children receive at this school. While I am not overly worried about the classroom attention my son will receive, I am concerned about the public system in general, the limitations it faces, the facilities, and priorities of the administration.

So, instead of being an active voice for public school kids in government (I’ve met with no less than 10 local and provincial officials on school issues with no results), I’m getting out. My kids are worth more than me banging my head against a bureaucratic brick wall. You may well have a wonderful public school experience, I wish we had. In the end, you have to do what’s right for your own kids, for mine, that’s getting out of the system.