They bond together more quickly and strongly than any other political group in history – and they are political. Women who have social media bonds tend to be more outspoken and active in debates that go against their collective wisdom.

Witness the furor that is whipped any time breast feeding is debated.

There’s the Nestle Family fiasco. There’s Gisele Bundchen speaking out. The latest is a logo on a onesie at Old Navy.

The simple stylized phrase “Formula Powered” has the social media moms whipped into a boycotting frenzy.

Cate Nelson of the green parenting blog ecochildsplay.com wrote about the outfit on Sept. 13: “As if the formula industry didn’t have enough power … now your baby can empower it with this adorable onesie. Yuck, right?”

She and others are posting both the Old Navy corporate contact information for complaints and the form letters they have received back from the company.

Canadian breastfeeding expert Jack Newman has also waded into the controversy. A letter he wrote last week about being “shocked” by the logo is being circulated on websites including drmomma.org.

One ecochildsplay.com commenter, Alexx, called formula feeding “risky.” “What would you say if a pregnant mom had a maternity shirt that said ‘CIGARETTE POWERED!’ ?! You would probably freak out,” she wrote.
[source] 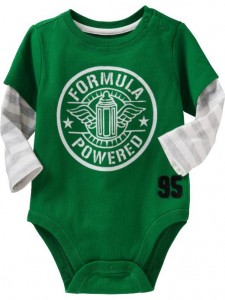 Well guess what, Moms, not everyone can breast feed. My wife tried it with Zacharie. He couldnt latch. We saw a lactation consultant, did all the exercises, positions and it just. didn’t. work. So she pumped. For SIX MONTHS. This turned the normal feeding process into a task twice the length because it meant sitting in a chair for 30 minutes 4 times a day to pump.

My mother (a nurse) called Jen a hero for putting up with the extra 2 hours of labour each day to try and squeeze out every drop she could for her son. Finally, she was convinced she had done her best and was just exhausting herself with the pumping. We switched to formula.

With baby number 2, we had the same problem. Charlie was tongue tied which prevented him from latching properly. We snipped his frenulum to help the process. For another 5 months, my wife spent an extra two hours a day hooked up like a dairy cow.

She would look longingly at women who were able to just “whip it out” in a food court or park. When our sons needed to be fed she had to pack along extra bottles and seek out a way to heat them – it was a process.

So for us to see women get on a pedestal and absolutely blast those who don’t have boobs that work as being part of the problem, we get defensive.

The self-righteousness that accompanies the breastfeeding debate is embarassing. And why is there a “debate?” Breast is best. Full stop, end of discussion. BUT – not everyone can do it, and those women need to be supported, not chastized.

We’re dads, we don’t really have a say in the matter other than to offer support and help where we can. As one father commented to me “my wife chose formula. Great side effect was that I instantly became a complete equal in the ability to care for & feed infant.”

What about you? Was your family successful at breastfeeding? Did you have a choice?