[twitter]Stephanie Mclean, an Alberta MLA, is pregnant. When she gives birth in February, it will be the first time a baby will have been born to a sitting MLA in 110 yrs of provincial history.

And everyone is making a fuss.

There are no changing rooms in the legislature. There’s no child care. All these rookie MLAs are younger and have kids, in fact there’s nearly 2 dozen under the age of 10 in families of these members. Should the legislature be family friendly? Will the newborn need ID to get through security? Can she bring an infant on the floor? Where will she breastfeed?

While it’s legitimate to suggest there should be written parental leave rules for legislators in the legislature, a big deal is being made over something that, really, isn’t that big a deal at all. The solution to this “problem” is actually quite obvious when you break it down.

HAVING A BABY CHANGES THINGS

In fact, babies have changed things for elected officials before. A councillor in Brazeau County, Alberta caused a stir by bringing her newborn to daylong council meetings in 2012. That same year, a Quebec NDP MP brought her infant son to the House of Commons for a vote and was asked to leave when politicians started cooing for selfies instead of tending to business.

So while it’s not new for politicians to have babies, it’s a new phenomenon under the dome in Edmonton. So Mclean is making headlines over the novelty of it all.

The chief storyline is Mclean making a point that she doesn’t have maternity leave benefits (since MLAs don’t pay into EI, they can’t claim it). “Alberta MLA to become the first to have a baby in office – it may mean her pay is docked” blared a CBC headline. You see, if she misses legislative days, she could be docked $100 per day of absence exceeding 10 days. As some Redditors have calculated, with a legislature sitting an average of only 52 days a year, she would lose perhaps $4200 from her $125 000+ annual salary.

Those who pay into EI, by the way, are only entitled to a percentage of salary to a maximum of $524 a week of benefits while on mat leave. In other words, if you make more than the maximum EI benefits, you will have your pay “docked” when you go on maternity leave. For our family, it meant my wife had her income “docked” by about 2/3 while she was on maternity leave.

Since McLean isn’t eligible for EI, she’s not eligible for this salary slashing. If she was to actually have this “benefit” she would receive a mere $27k while home with her child for a year, not the $121k if she simply was “docked” for ‘skipping work.’

Mclean, in an interview with CBC’s As It Happens, is trying to make this a women’s issue. She’s asserting that women are being held back from entering public office because of having children. Actually, women are held back in careers all the time when they have children. The glass ceiling is not a myth. It’s not a matter of right or wrong, it’s a matter of that’s what happens when you stop and start and stutter your career. My family experienced it first hand.

Having a baby is expensive. It hurts careers and costs families. Not only do you see the sudden drop in household income because of EI, but you miss out on career advancement opportunities. My wife was about to be promoted when she had our first child. She didn’t apply. She couldn’t apply, she was pregnant and days away from being off the grid for a year. And so she missed the promotion, missed the raise, missed the chance to advance her career.

IT TAKES TWO (TO MAKE A BABY)

The other half of this equation is the immediate maternal bias the conversation has taken. Everyone is wondering how will she juggle work and family? How will she balance child care and career? These are unfair questions. Again, my wife faced the same interrogation when she finally re entered the work force. Funny, but nobody ever asked me who would look after my kids when I interviewed for a morning radio job that had me on air before my family was even awake.

Women shouldn’t face these questions, because they’re not alone. Parenting is a team sport.

Here’s the thing: Mclean did not immaculately conceive this child. She has a partner. She has a husband. There is another parent-to-be in this equation.

Her husband is a student and ‘is bound by his duties to stay in Calgary’ as Ms Mclean told the CBC. There’s that maternal bias again, this time raised by the mother no less. Except he’s not ‘bound’ by anything.

Talk to Jamie over at A Crock of Schmidt. He worked in the big towers in downtown Calgary in oil and gas and, years ago, he and his wife decided he would stay home while she worked. He doesn’t like doing the math on what it has cost him in earnings, but what he won in quality of life with his family is priceless.

If McLean wants to go back to work right away, why can’t HE take the time off and stay home!? This is 2015. I’m friends with dozens of SAHD. They even have their own National At-Home Dad Network and convention.

We need to get off the notion that only women raise children. Men can too. If Ms Mclean and the Alberta NDP are so concerned with acceptance of young families in public office, they need to accept that the career sacrifices people make by having children is a two way street. My brother stayed home when my niece was born. He got the odd looks at ‘Mommy and Me’ infant singalongs, but he did it. Men are fully capable of staying home. Seriously, we are.

DADS ARE PARENTS TOO

Everyone is talking about gender parity in elected office and cabinets this week. How about gender parity at home? My wife is away this week, at work. I’m juggling dance/art/soccer and work. Cleaning house, doing laundry, reading, entertaining, running around. It’s a parent’s job to do that. I’m no hero. I’m just a parent. 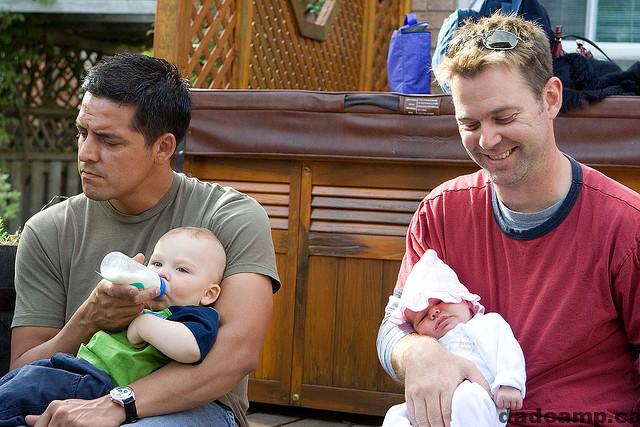 If Stephanie Mclean and her husband want to become parents, then they need to understand that it is a team sport that comes with sacrifice. Kids change things. You can’t have it all. You have to give, you have to take, you have to modify your expectations.

If she wants to go back to work, it is not unreasonable to expect that he would delay schooling to attend to their child. If she doesn’t want to go back to work, well making nearly $90k more than a typical worker on mat leave should be a nice cushion.

Welcome to the world of parenting, Stephanie. Roll up your sleeves ’cause the parenting sphere has stronger ideologies, opinions, and debates than politics. And it gets bloody up in here.