I didn’t know diamonds were on the menu for a tenth wedding anniversary. My wife wanted them, but didn’t see them coming when I enlisted the help of my sons and Michael Hill to re-propose on the top of the Eiffel Tower just like I had done 11 years earlier.

Here’s how we pulled it off! 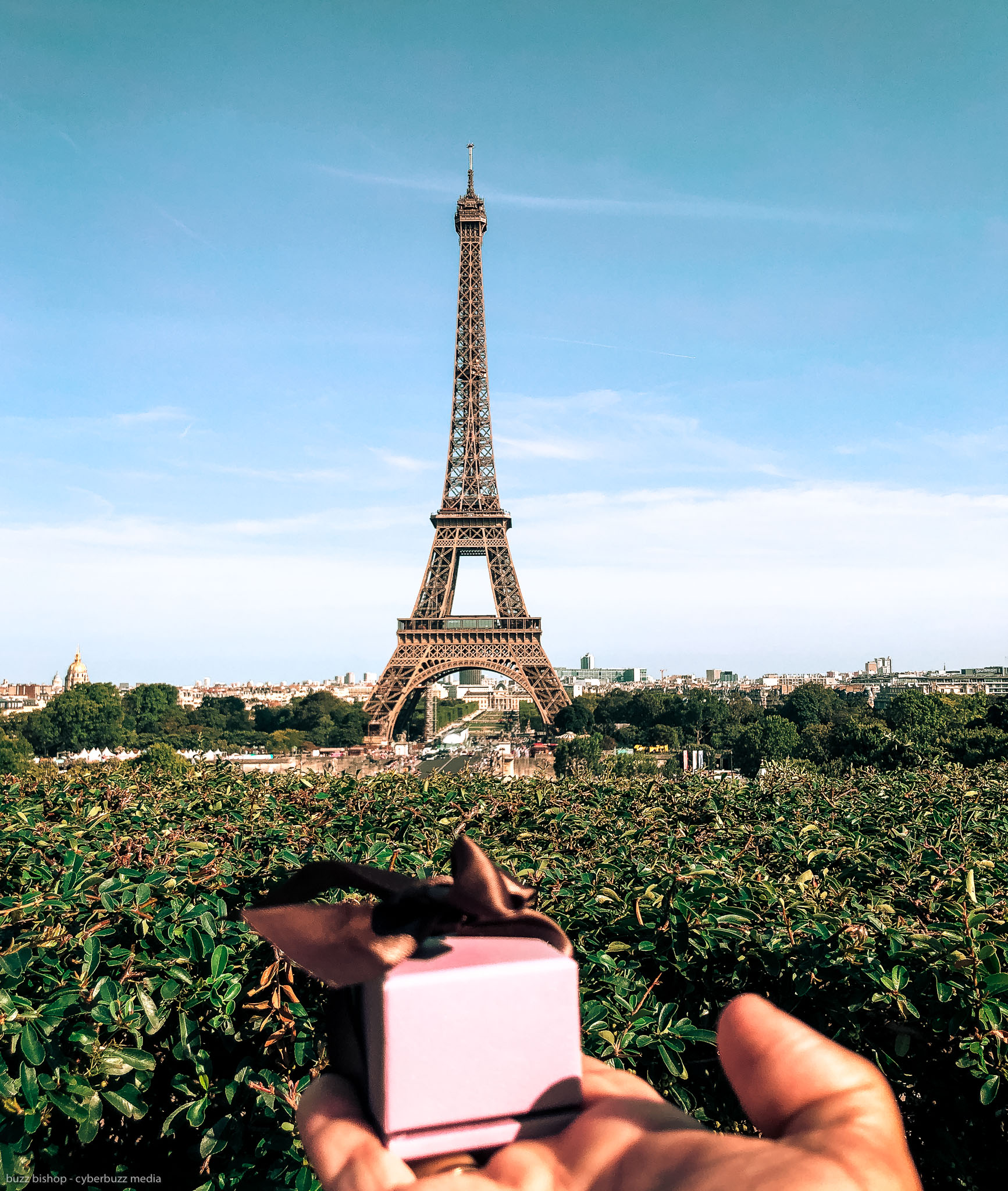 HOW IT ALL STARTED

My wife had a newly separated friend over for spontaneous wine and girl talk one night and I lingered in the next room to eavesdrop.

“I didn’t even make it to 10 for my diamonds,” the friend remarked in the middle of a rant about why she left her ex.

“Every anniversary is diamonds,” my wife responded causing me to go to the Google to find out what the traditional gifts for each anniversary should be.

Usually we have fun with our anniversary gifts. I gave her golf clubs for our sixth anniversary (iron), when leather was on board for year 3, I got her a new smartphone cover. I had thought the 10th anniversary was about tin or aluminum (and it traditionally is) until I clicked on a link and got the full picture that included the modern gifts for the tenth wedding anniversary.

I was prepared with a creative tin gift (tickets to see Jerry Seinfeld along with a photo of him dressed as the Tin Man from 1998). She’s a huge Seinfeld fan, has always wanted to see him, and this fit perfectly in line with all the other “creative interpretations” I had done for wedding anniversaries in the past.

I thought I was perfectly staged with a perfect gift, except the “every anniversary is diamonds” comment hung over me. Ten years is a big deal, diamonds are always special, and so I started plotting a way to give her the tenth anniversary diamonds she wanted, but not when she wanted them.

HOUSE, BABY, MARRIAGE – IN THAT ORDER

My wife and I did not plot out our life together along a traditional timeline. We got pregnant soon after we started dating, and then we bought a house. We wouldn’t actually get married until our oldest son had turned 2 and we were pregnant with our second.

It was only after being together for nearly 3 years (and parents for nearly 2), we decided we were in it for the long haul and it was time to probably get married.

I had been to France a handful of times in the past, before our family visit in 2008, but I had never been to the top of the Eiffel Tower. I visited on my own years before and went up the tower, but not to the top, commenting to myself I would save the experience to share with someone I love.

Jet-lagged after a red-eye flight, I ushered everyone over to the tower for a late afternoon ride all the way to the top, and somewhere on the southeast side overlooking the Champ de Mars, I told her I would like to choose her, and asked if she would choose me, the way our son had chosen us.

AND NOW IT COMES FULL CIRCLE

“Every anniversary is diamonds,” rang in my head for the weeks leading up to our 10th anniversary in July. And then it clicked. We were headed back to Paris this summer, with both of our sons, as part of a whirlwind European vacation to trace our family tree and put the french immersion my sons were studying to the test.

It would be our first visit back to Paris since we were engaged there 11 years ago so … why not … drop some diamonds on her at the top of the Eiffel Tower again!? Sure, our trip to Paris was planned for 5 weeks after our anniversary, but that smidgeon of delay would put her off the scent that perhaps, indeed, diamonds would be coming.

So, with some help from my sons and Michael Hill, I put the wheels in motion for a truly special 10th anniversary diamond. 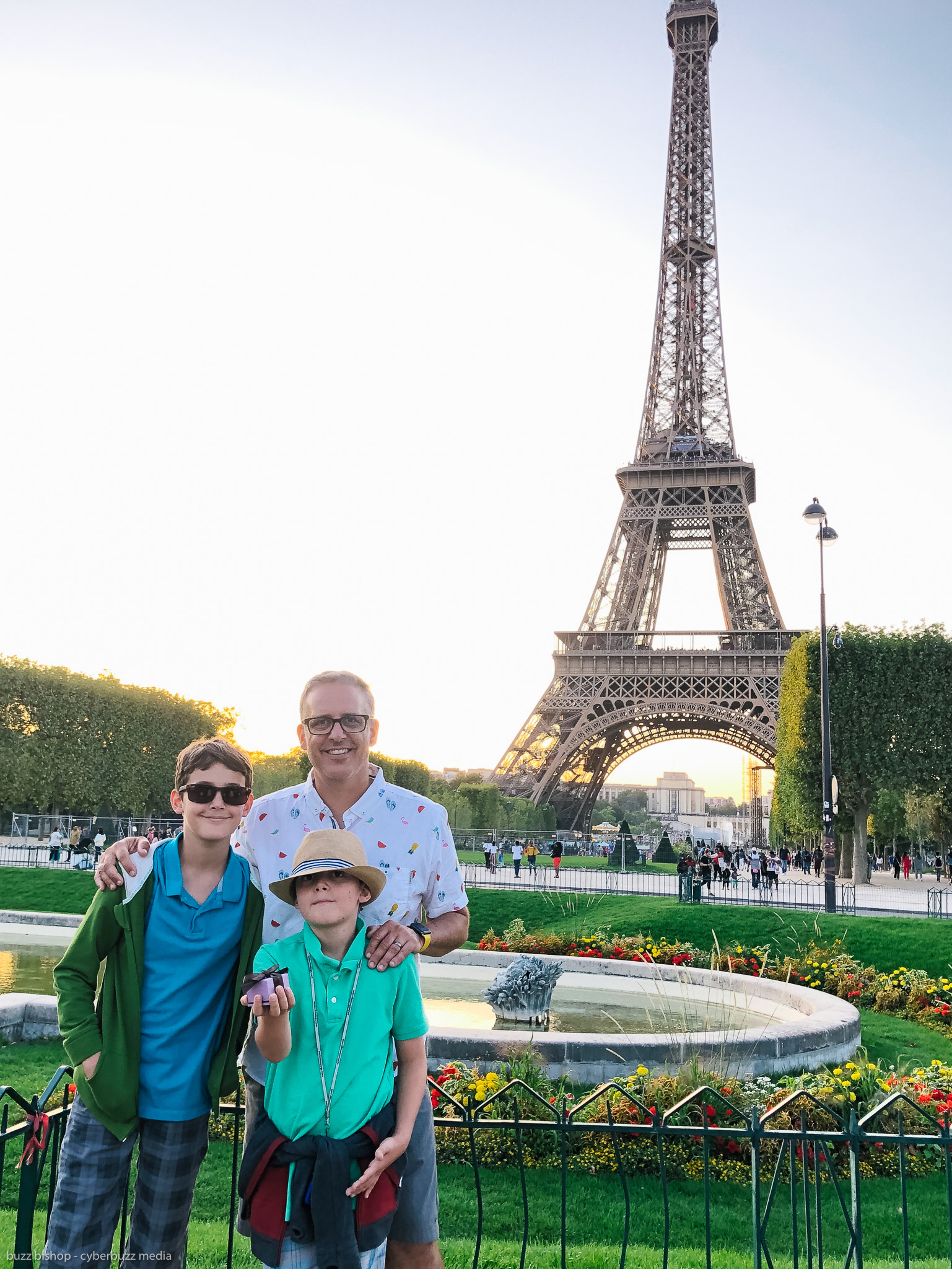 All I knew is that she wanted some diamonds. I didn’t really know how to put it together with her engagement ring and her wedding band, and that’s where Michael Hill came in.

I flipped through the website for some ideas and then went into the Chinook Centre store to really look at things and get some more advice.

Did I want a channel set? Individual diamonds all the way around? Something with a pave? Should it be small and dainty, or bolder?

I came prepared with photos of her current rings and with all the questions, the staff at Michael Hill were patient and walked me back and forth through all the cases letting me try things on modelling different styles on my hairy knuckles. 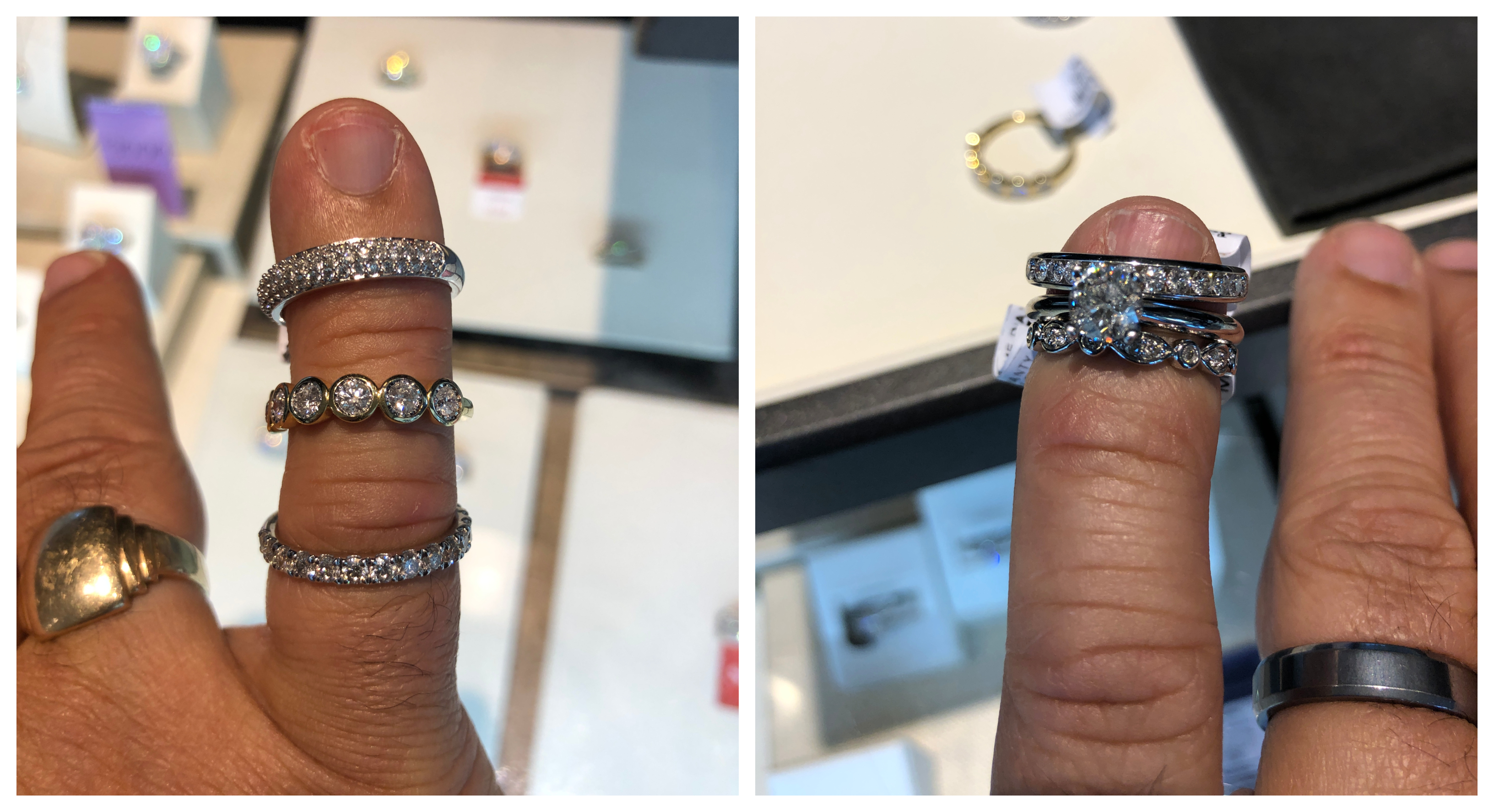 In the end, I chose a channel set wedding band from the Evermore collection, with 1/2 a carat of diamonds spread around half the 10 carat white gold band. 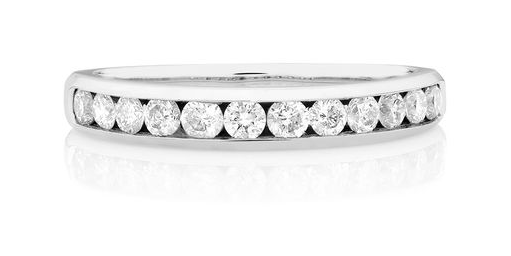 I think it matched perfectly.

I couldn’t have asked for a more perfect evening to launch the surprise plan. I had pre-booked a 6:30pm ride to the top of the Eiffel Tower – a perfect time for evening photography – and the day was warm and blue sky perfect. 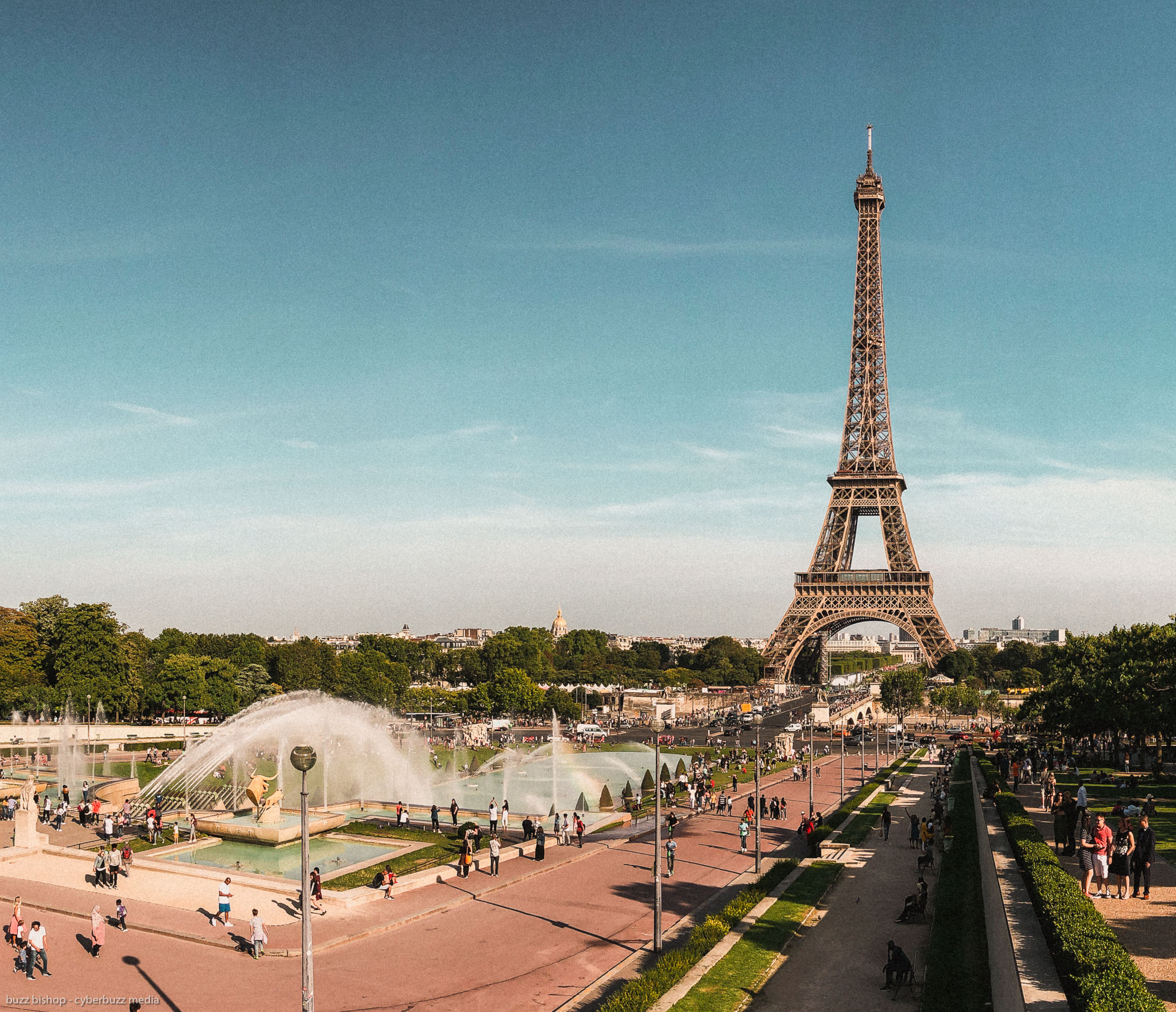 I had convinced my wife to pack along a cute summer dress and we pretended we were Instagram models as she posed for fun photos at Trocadero amongst the big crowds. 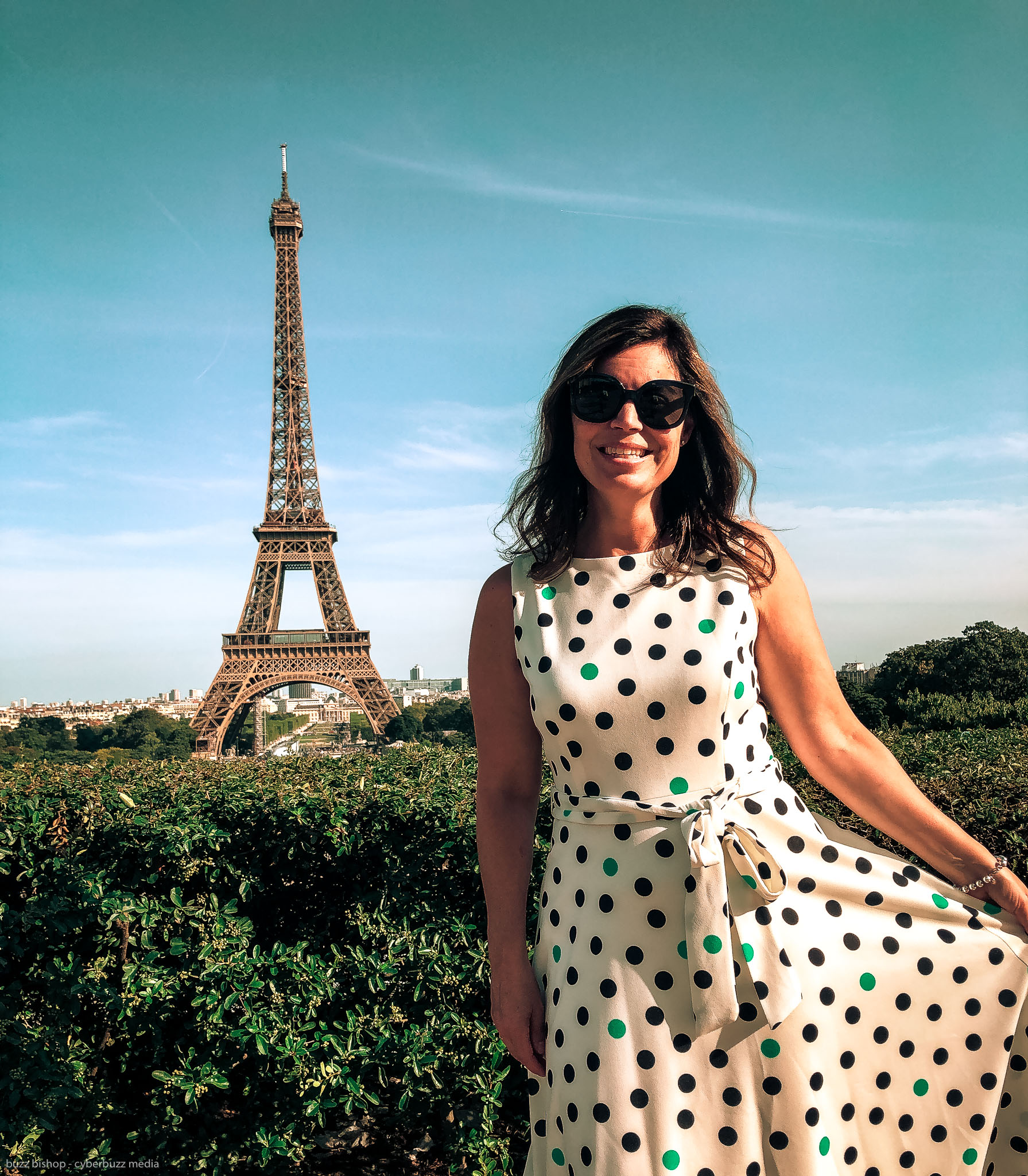 Now .. this is the part where I have to say my wife thought something was up. As I tried to sneak away to take pictures of the purple Michael Hill box with the Eiffel Tower, the boys would distract her. To be honest, we were all acting a little weird.

Since the boys and I picked out the ring at Michael Hill the previous month, they’d been obsessed with asking her questions about our engagement. For two boys not really interested in a European adventure for the summer, the particulars of our Eiffel Tower adventure were top of mind for them. Mix in how I acted when I proposed, and the 10th anniversary, and the flirty dress and .. well … I’m a terrible secret keeper and she knew something funny was happening. 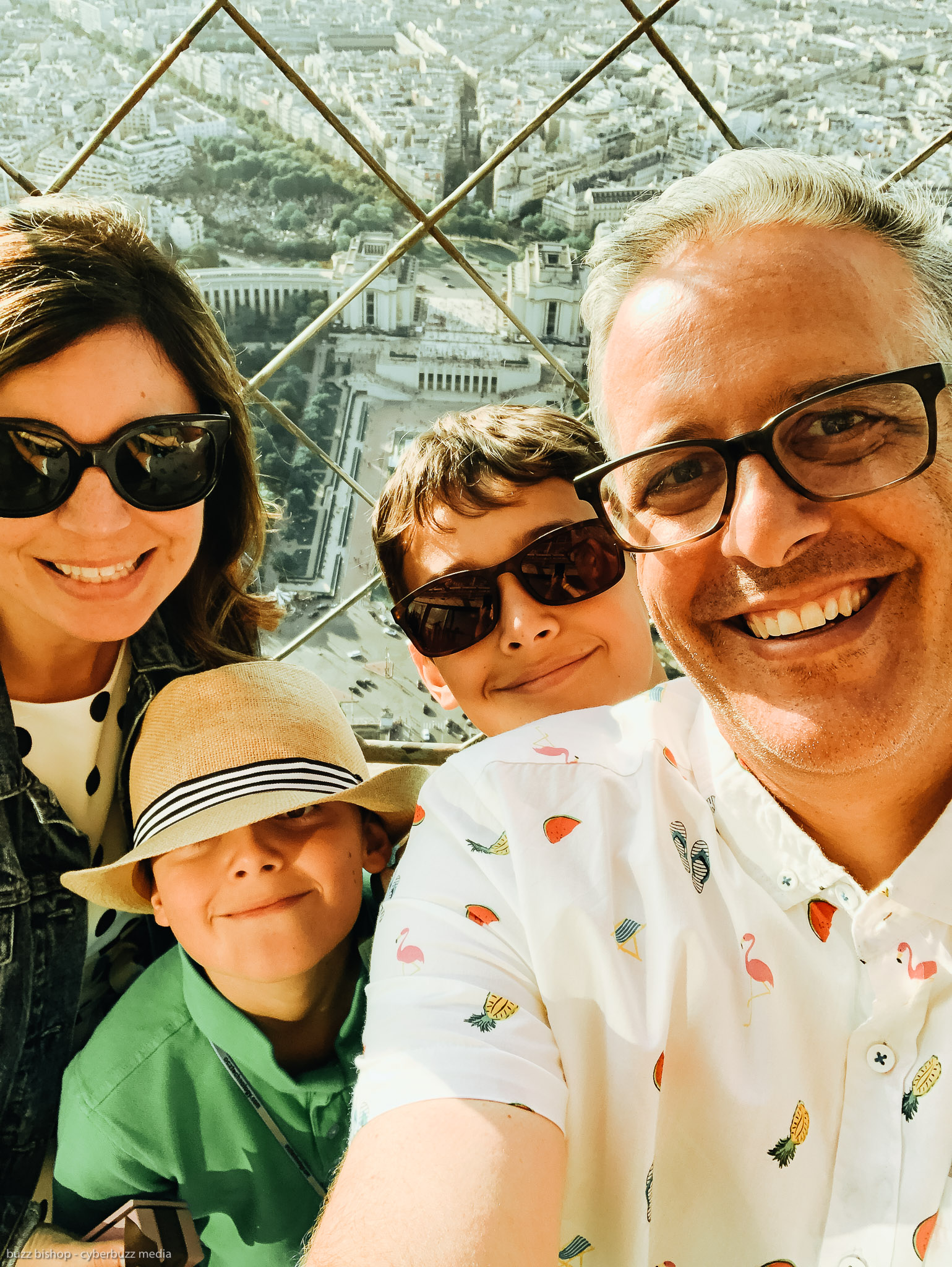 Nonetheless, once we got to the top, I found the same spot on the east side of the tower where I had first proposed, fired open my Instagram to stream it all live and .. immediately forgot all the things I wanted to say.

But none of it came out. The boys were giggling, I was stammering, and in the end I just kind of messily handed it to her.

But Jen loved it and the boys had fun being part of our 10th anniversary “proposal.” 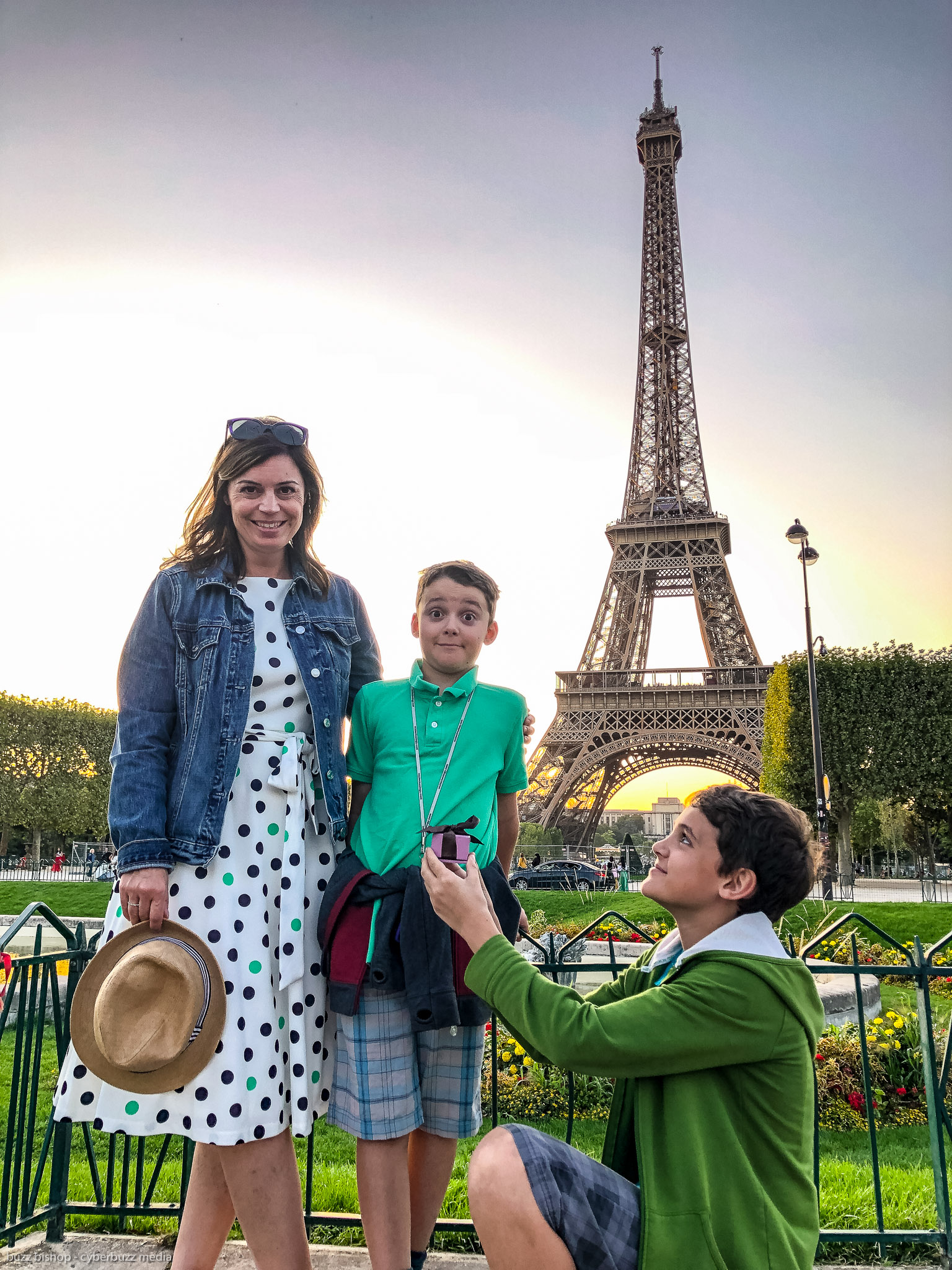 Despite the comedy of errors that happens when fathers and sons plot something big, we pulled it off. My wife, while she knew something was up, was still surprised to open the box and find a glittering diamond band from Michael Hill. 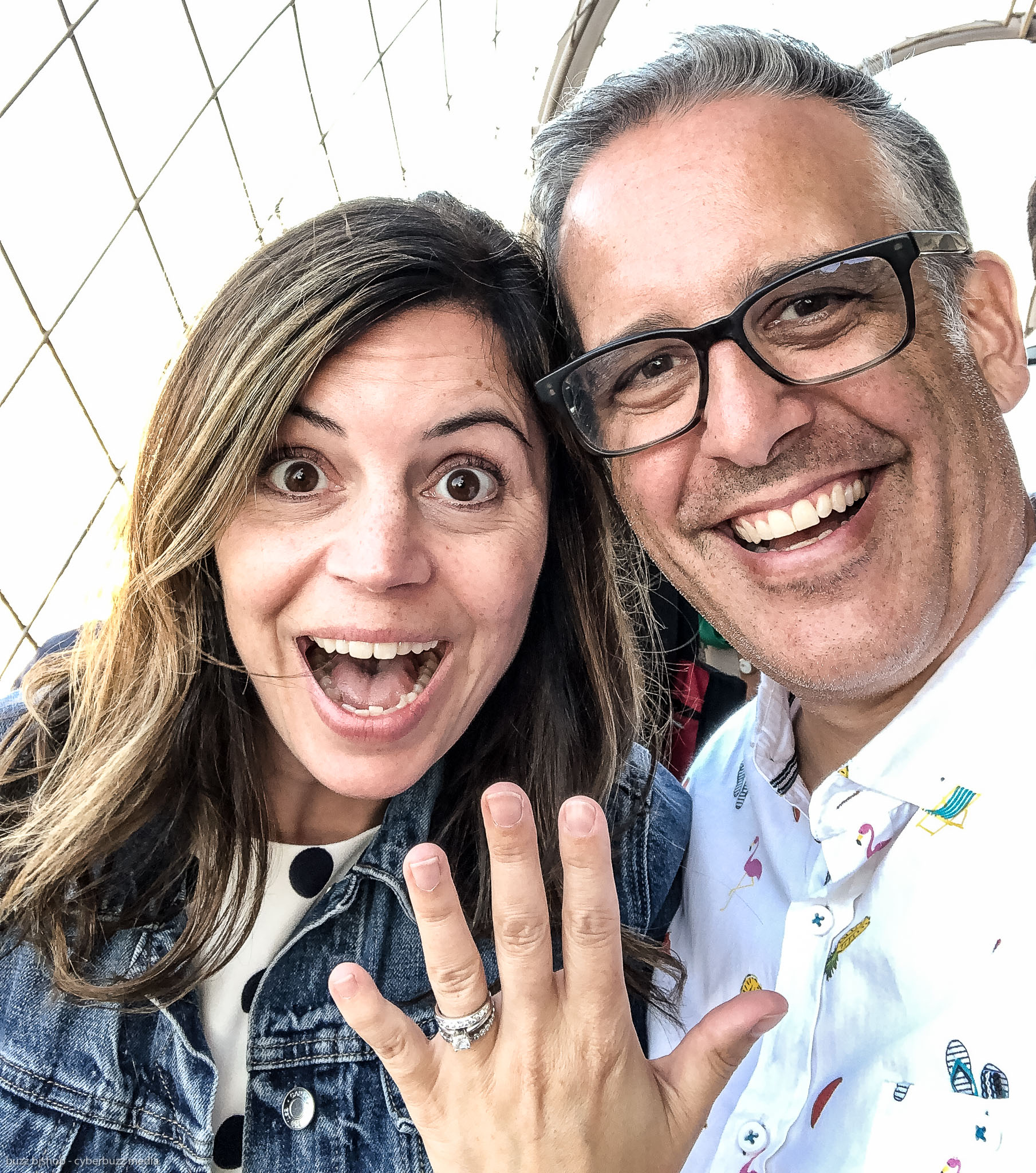 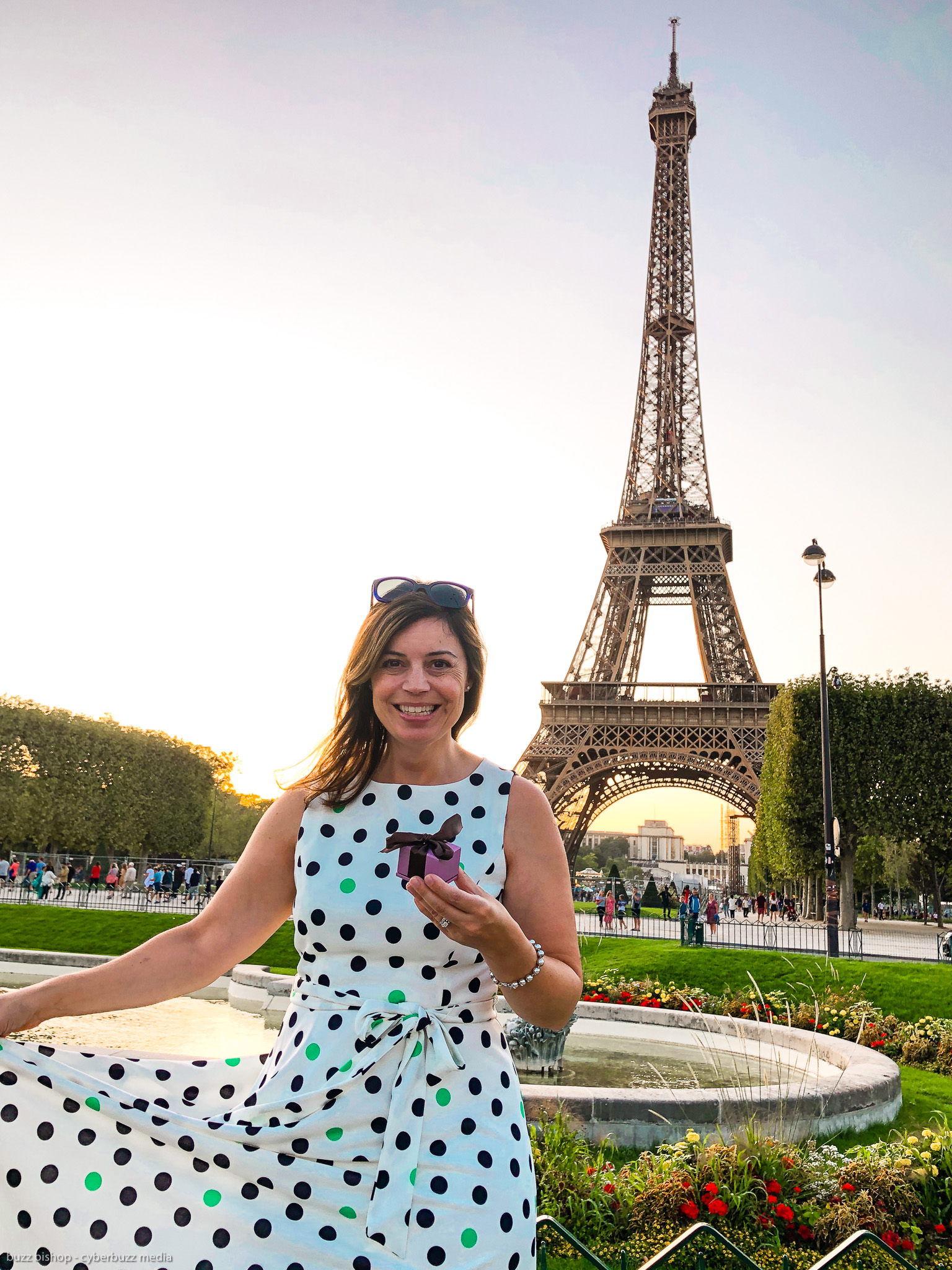 “I love Paris,” she laughed later that night. “Every time I come here I get diamonds!”

Today,  Michael Hill has more than 300 stores in three countries and remains committed to creating quality jewellery to cherish for a lifetime. From 1979 til now and into the future, one constant underpins all that they do: they’re for love.